Coker claims he is owed buyout 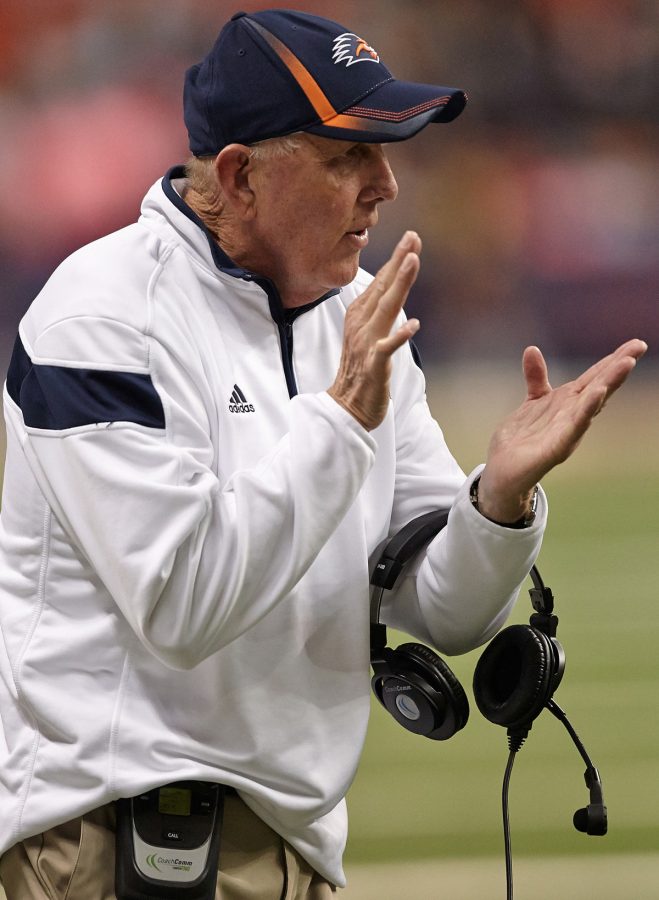 The more Larry Coker speaks publicly about his departure from UTSA Football, the more likely it seems that his “stepping down” was not completely of his own volition.

“We are here today because we’ve had a very good man and coach make a decision to step away as the leader of our football program,” Lynn Hickey said to open the press conference that officially announced Larry Coker’s resignation.

When questioned if Coker was asked to leave, Hickey responded, “This was a decision that Coach Coker made that he felt was best for the program.”

“They let me go,” Coker said in a candid interview last week, reported by Jerry Briggs of the San Antonio Express-News. “I had a buyout. They had to pay me to make a change. Just whatever my contract said, that’s what they had to pay me. It was only fair. They knew that when they let me go.”

Briggs also reported that the buyout would cost UTSA $1.56 million over the next three years, but those numbers have since been disputed by UTSA Associate Vice President for Communications and Marketing and Chief Communications Officer Joe Izbrand.

Izbrand, Hickey and UTSA Athletics have refused to reveal specific numbers or comment on whether Coker is eligible to receive buyout payments.

“Lynn never did give me a reason,” Coker told the Express-News, “and I didn’t ask. If they don’t want you, they don’t have to give you a reason, I guess.”

Section 7.B of Coker’s contract – signed and approved by the UT System Board of Regents in 2014 – outlines what happens in the event that Coker was terminated by the University without cause, which Coker claims is the case.

If Coker was truly terminated without cause, he would be owed the base salary (not including bonuses) for the remainder of his contract – to be paid in monthly payments until August 31, 2019 – as well as “any post-termination benefits applicable to regular employees of the University.”

Section 7.A of the contract, titled “Suspension or Termination by the University for Cause,” lists a number of cases in which the University could rightfully terminate Coker without owing him a buyout.

“In the event this Agreement is terminated for cause,” the contract stipulates, “all obligations of the University to make further payment or provide any other consideration hereunder shall cease as of the date of termination.”

One possible scenario is that Coker violated one of the terms of his contract, and that UTSA Football has kept quiet about the contract violation out of respect for Coker’s character.

It is equally possible that UTSA Athletics and its representatives have been untruthful concerning the nature of Coker’s departure.

Why would Hickey and other UTSA representatives lie about firing Coker? First, admitting that Coker needed to be replaced only a year and a half after signing a five-year contract could be perceived as questionable decision-making by an untried braintrust.

Perhaps more importantly, UTSA Athletics admitting to firing Coker without cause or for a reason not stipulated in Section 7.A, would also put UTSA on the hook for the full amount of the buyout, as opposed to whatever settlement could be reached if Coker files suit for breach of contract.

Another possible scenario could have left Coker with the impression that he had been terminated without reason, while also justifying Hickey’s claim that Coker decided to leave on his own.

Section 4.E, titled “Reassignment of Duties,” states, “at the discretion of the Athletic Director, Coach may be removed from the duties and responsibilities as Head Football Coach and reassigned…within the Athletic Department.”

“If the University exercises its right to reassign Coach and the coach refuses to accept such reassignment, the University may terminate this Agreement pursuant to Section 7.A (Suspension or Termination by the University for Cause).”

Essentially, Coker’s contract stipulated that Hickey had the option to remove Coker from the head coaching position and reassign him within UTSA Athletics at any time during the length of the contract.

If Hickey gave Coker the option to remain on staff in a different capacity, and he refused, then the university is in the right to let Coker walk without compensation. If this were the case, Hickey’s claim that Coker left on his own accord would be more genuine than Coker’s recent comments suggest.

These are only a few possible scenarios, and not much is known about this situation yet. It is quite possible that this dispute will be settled before it reaches a court, so the details of the departure may take a long time to reach the public.

But there is one thing to glean from what little we know about this situation so far. UTSA Football, despite being in its infancy, is still a Division 1 FBS program. Transparency is not to be expected.