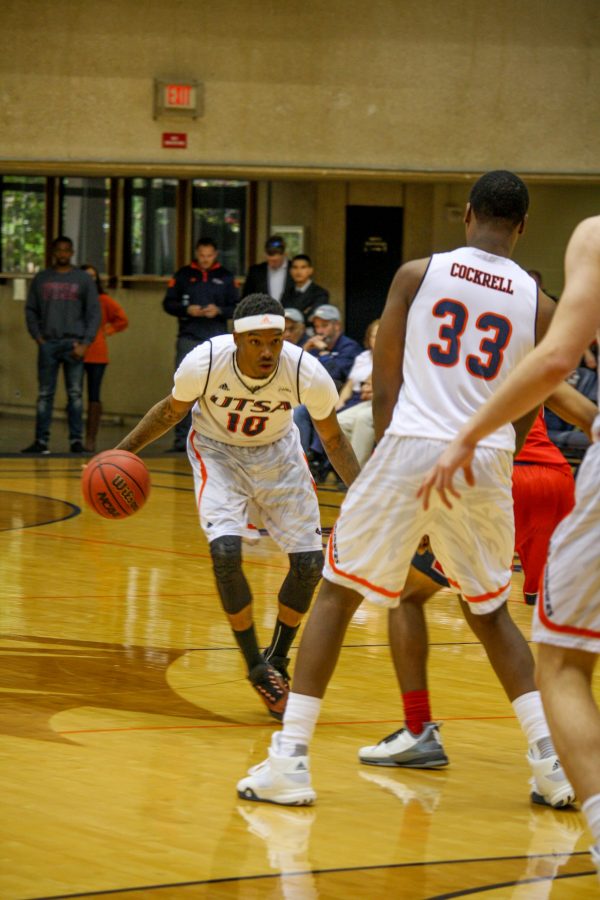 After a comeback victory over Conference USA (C-USA) opponent UTEP last weekend, UTSA men’s basketball Head Coach Brooks Thompson said that the victory could supply the team with some much-needed confidence.
However, the Roadrunners were unable to capitalize on this confidence as they were squarely defeated 72-56 by Florida International University (FIU) on Thursday and 86-71 by Florida Atlantic University (FAU) on Saturday.
Junior guard Donte McGill’s team-leading 23 points and forward Daviyon Draper’s double-double led FIU to a 72-56 win over the Roadrunners on Thursday, Jan. 21 at UTSA.
In a team-high 36 minutes, Draper led FIU with 12 rebounds and three steals, tied for the team lead in assists with three, recorded a block and scored 11 points.
McGill shot 50 percent from the field and was perfect from the free-throw line in 33 minutes.
Starting guard Christian Wilson led UTSA in scoring with 12 points and four assists. He also led all Roadrunners with seven rebounds, all in the defensive zone.
The other starting guards, Ryan Bowie and J.R. Harris barely trailed Wilson in scoring, with 11 and 12 points, respectively. Bowie earned four rebounds to Harris’s two, and both players contributed two assists each.
Lucas O’Brien played 32 minutes, fourth most on the team behind the three starting guards. In that time, he made 4-of-7 from the field and snagged six rebounds – second most among Roadrunners.
FIU’s defense stifled the Roadrunners, limiting them to 32.8 percent success shooting from the field and 15 percent from beyond the 3-point line.
In spite of the Roadunners’ struggles from the field, they were down by only five at halftime and held FIU Star center Adrian Diaz off the court with three early fouls.
But UTSA struggled to handle FIU’s size and experience. In the second half, the Roadrunners were out-rebounded by nine and earned only two points off second-chance attempts.
“They’re an excellent rebounding team,” commented Associate Head Coach Dan O’Dowd post-game. “They’ve got some long, athletic dudes out there. We’ve got some freshmen, sophomores out there who aren’t as physically developed, and to be honest with you, maybe not as athletic.”
In Saturday’s afternoon game against FAU, the Roadrunners again kept it close until halftime, when they trailed by only four points (38-34).
Christian Wilson was aggressive early, scoring 18 of his 28 points in the first half. Throughout the game, he continued to show the leadership he displayed last week against UTEP.
“Last game I played a bit too passively,” said Wilson, “so I got out of my game, which is penetrating and getting to the line. And in this game, I got back to it.”
Through the second half, the Roadunners were unable to keep pace with FAU, who shot 48 percent from the field and made 7-of-12 from the 3-point line.
“To their credit, they made some tough shots and were able to use the clock to their advantage,” said coach Thompson, commenting on the Panthers’ offense.
UTSA struggled to provide their top players with scoring support, as forward Lucas O’Brien and guard J.R Harris were the only other two players who scored in double figures.
“I feel like a couple guys should have stepped up,” Wilson said of the team’s performance, “being that the coaches have high expectations. But unfortunately, they gotta want to do it themselves.”
The Roadrunners’ success at the free-throw line has been perhaps the most positive aspect of their game. In the last three games, the Roadunners have made 76 percent of their free throws – a strong number for a young team.
The two conference losses dropped the Roadunners (4-16, 2-5 C-USA) to second-last place in C-USA – ahead of only Rice (6-14, 1-6 C-USA).
UTSA will continue to work through their struggles as they travel to play fifth-place Louisiana Tech (14-5, 3-3 C-USA) on Thursday, Jan. 28 and Southern Mississippi (5-12, 2-4 C-USA) on Saturday, Jan. 30.