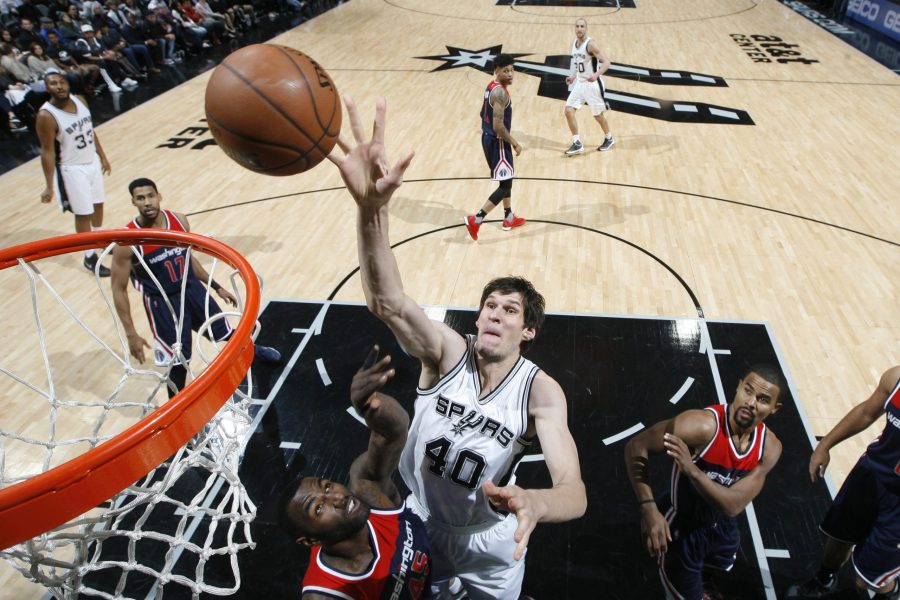 The San Antonio Spurs have not missed the NBA playoffs since Gregg Popvich became head coach and Tim Duncan was drafted first overall in 1997.
There is much more to the story than meets the eye. The Spurs have scouted, drafted and trained their team in an effort to make it the powerhouse it is today.
Popovich is accompanied by a great coaching staff and front office. President of Sports Franchises and General Manager R.C. Buford has given Popovich a lot of room to run the team the way he sees fit.
Chip Engelland is also a name worth mentioning. Engelland has been an assistant coach with the Spurs since 2005, specializing as the team’s shooting coach. Englland, who has been loyal to the Spurs, is credited for helping Kawhi Leonard to develop his outside game.
The Spurs are notorious for drafting well. They will draft for a current need or do a “draft and stash” – where they draft foreign players and allow them to develop overseas for a few years. Tiago Splitter, for example, was drafted in 2007, but didn’t actually come over to the states until 2010.
The Spurs have obtained some players through the draft that have made their team what it is today. They hit it big in the second round of the 1999 draft when they selected a 22-year-old from Argentina, Manu Ginobili, with the 57th overall pick. In 2001, Tony Parker hit the scene when he was drafted 28th overall in the first round. Duncan, Ginobili and Parker, known as the “big 3,” have been instrumental in shaping the team.
Many NBA teams are formed when star players join together to form “Superteams,” such as the 2007 Celtics, 2010 Miami Heat and the 2014 Cleveland Cavaliers. The Spurs have not been ones to chase down star free agents, but have chosen players who fit well in their system.
In 2008, the Spurs drafted a point guard named George Hill from Indiana University-Purdue University Indianapolis (IUPUI) with the 26th pick in the first round. George Hill was a solid contributor for the Spurs from 2008-2011, averaging 10 points per game, and was one of the best defenders on the team. Hill was very athletic, had a long wingspan and was a solid guard to come off the bench in place of Parker.
Perhaps Hill’s biggest contribution to the Spurs came during the 2011 draft when the Indiana Pacers saw his potential and agreed to trade their 15th overall pick – Kawhi Leonard, a 6-foot-7 small forward from San Diego State – for Hill. From the start, Leonard was a defensive machine who could guard just about any player – exactly the kind of player the Spurs had been missing. Now, through extensive training, he has become a threat on both ends of the court. Hill is a quality player, but considering Leonard is the reigning defensive player of the year and is currently second in MVP votes, the Spurs are not spending much time thinking about what their team would look like with Hill in the lineup.
Many players have found their keeps as solid role players for the Spurs. Popovich is known for getting contributions out of young players; prime examples are point guard Patty Mills and shooting guard Danny Green.
Green had a tough time adjusting to the NBA. He was drafted in 2009 by the Cleveland Cavaliers in the second round with the 46th overall pick. After playing only 20 games in his rookie season, he was waived by the Cavaliers, eventually making his way into the D-League.
In Nov. 2010, the Spurs took a flyer on Green, only to waive him after he played only two games. Green was officially re-signed by the Spurs in March of 2011 and has since made his way into the starting lineup. Now, Green ranks second all-time for 3-pointers made by a Spurs player and has become one of the league’s best defensive players at the shooting guard position.
After they beat the Cleveland Cavaliers in the 2007 NBA finals, the Spurs’ years of dominance seemed like they were coming to an end as they were getting older. But in more recent years, the strong scouting system of the Spurs has injected the system with another wave of youth, with the additions of Kawhi Leonard, Danny Green, Patty Mills, Jonathan Simmons and Boban Marjanovic (all 30 years old or younger).
Simmons is a good example of how the Spurs scout the right players and mold them into NBA contributors. Simmons went undrafted in 2012, but was quickly picked up by the Austin Toros, the Spurs’ D-League team. After two years of developing with the Toros, he was called up to the Spurs. Simmons brings energy and athleticism to the Spurs that will be key come playoff time.
Some NBA teams try to buy success through the free agent market, but the Spurs have taken a different approach. The Spurs have shown what it means for a team to make their players as opposed to the players making the team.