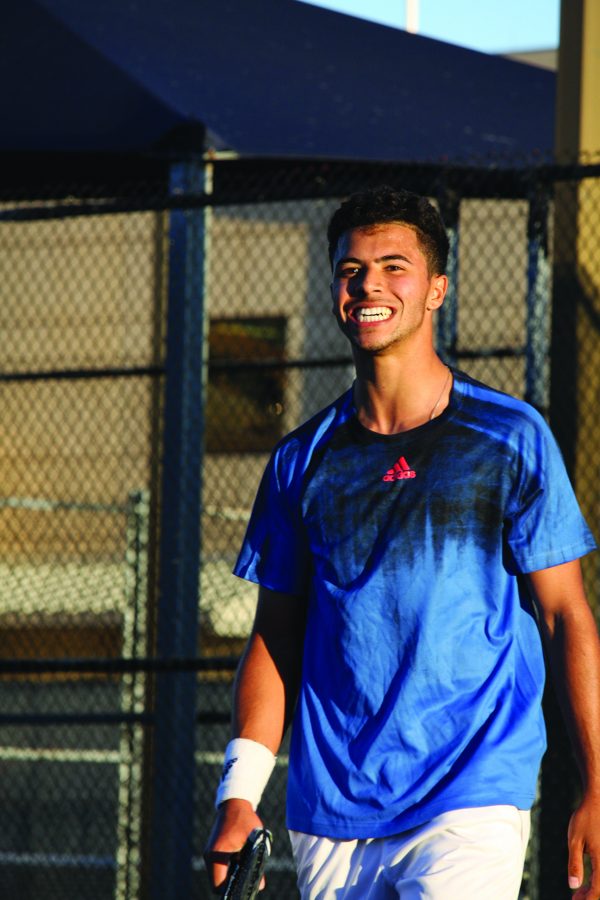 After starting the season with an 0-3 record, the UTSA men’s tennis team won its first match Friday at home against Louisiana-Lafayette (ULL) in a hard-fought 4-2 victory.
UTSA pulled ahead early, winning all three of the men’s doubles matches to clinch the doubles point. Senior Diogo Casa then led the team in singles with a decisive 6-2, 6-4 win against Louisana’s Arthur Libaud to bring the team to an early 2-0 lead.
The Ragin’ Cajuns answered back to tie the score 2-2 as Vlad Kramarov defeated Eric Buchalter 7-3, 7-6, 5-7 to win the fourth position and Will Huyton beat Mark Ginting 4-6, 6-3, 7-6 (6) to take sixth position match for ULL.
Needing two wins to clinch the victory, freshman Takeru “TK” Watanabe rallied from a second set loss to defeat Eric Perez 6-1, 3-6, 7-5.
The decisive match then turned to aggressive shot-maker Christian “Gio” Carrillo, who fought his way back from a close tiebreak loss in the first set to win the match 6-7 (5), 6-4, 6-4, sealing the 4-2 win for UTSA.
Carrillo said the win was a team effort, as throughout the match, the team’s motto “On it!” could be heard yelled by members of the team – both on-court and off – in support of their teammates. “Our team takes pride in being one of the closest teams,” Carrillo said. “Whenever somebody’s down, we pick them right back up.”
Head Coach Rodrigo da Silva praised the team’s effort in their win and had similar remarks on the tight-knit team. “Tennis is an individual sport,” said da Silva, “but as a team, when we are all out here, everyone affects each other. The energy is contagious.”
The Roadrunners’ next match, a home match against Texas A&M-Corpus Christi, will be held on Wednesday, Feb. 10 at noon. Admission is free for everyone.