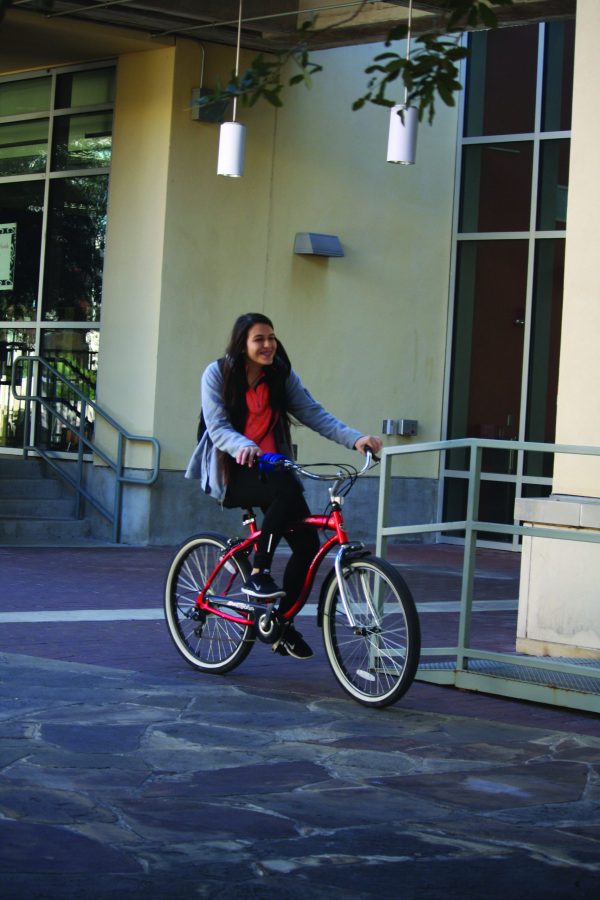 There are many reasons why rolling to and around campus is popular. So popular, that at times it seems there is a bike, longboard, scooter or skateboard every few feet.

Freshman engineering major Justin Fonseca rides his bike to and from school, despite owning his own vehicle.

“One of the reasons was definitely to avoid the freshmen fifteen that seems to get so many other students,” Fonseca explained. “It was four miles to and from the engineering building every day,” said Fonesca.

Transportation via bike is a cost-efficient, healthful method of moving around in your day to day life. Cruising up those hills on campus may just shed some of that holiday weight.

Freshman art student Magaly Cantu, stated that riding her bike was the best way to get on campus from her University Oaks apartment.

“It took too long to walk, roughly twenty minutes, and parking is really expensive,” Cantu stated. “Riding bikes around campus is fun, but it’s mostly uphill.”

Safety, however, is a principal concern for many cyclists.

A growing concern is that students who ride bikes or boards mix with drivers about as well as orange juice mixes with freshly brushed teeth—not the best. One day riders and drivers might be able to get along, but we may be completely hovering around by then.

Senior Aaron Levy, who is a part of an on-campus ministry group, expressed why he rolled his way into the long board community on campus.

However, Levy also discussed the occasional conflict he rides into with the everyday pedestrian.

“Sometimes people change direction out of nowhere, and you have to bail,” Levy revealed.

The popularity of rolling  through campus has created a bit of an issue between riders and the everyday pedestrian.

Freshman biology major Valerie Ramos expressed that she had a minor collision with a pedestrian while on her way to class.

“I was trying to get their attention, but I couldn’t in time,” said Ramos.

Despite this incident, Ramos was quick to recommend riding bikes to those who live on campus.

Terrell Scruggs, a guard for the UTSA basketball team, longboards around campus every day and says that longboarding is a much better method of getting to class than just walking around, barring the possibility of injury.

Scruggs told his fellow teammates about the fun times he has had rolling around campus, and said that some of his teammates now have plans to buy a longboard.

“If you’re interested in it, you should definitely try it!” Scruggs exclaimed.