Scene In Session: The Woodlawn Theatre 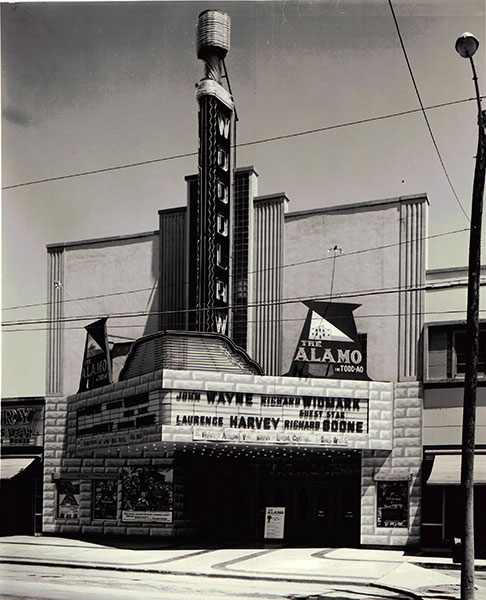 Imagine walking into a 1940s style theatre and seeing your doctor as a wild haired 80’s rocker or the girl that sits next to you in calculus as a mermaid.

Would you be shocked to see that not only are they excellent performers, but that their show was one of the best shows you’ve seen all year?

These are the types of quality theatre performances the volunteers at the Woodlawn Theatre bring every week to the San Antonio community.

With the stage, the balcony, the ornate designs, the sights and smells of the snack bar, The Woodlawn theatre brings modern day performance to a historic theatre of the past.

First opened on Aug. 17, 1946, on the 1920 block of Fredericksburg Rd, the iconic Woodlawn Theatre was an elegant venue for Hollywood films.

The theatre thrived through the 50s, 60s and 70s as an active movie house, showing the best Hollywood had to offer.

In 1960, John Wayne premiered one of his most famous films, “The Alamo,” at the theatre.

The theatre was forced to shut down in the 80s. The venue has shifted through a number of temporary owners, sometimes  opening for special events such as the premiering  of Paramount’s laser spectacular show tribute to Pink Floyd in 1986.

It wasn’t until 2006 that the Woodlawn Theatre would begin finding success again.

In 2006, Jonathan Pennington leased the theatre under Amphisphere Productions and revamped and restored it into a community theatre, hosting a number of Broadway style shows, such as “Rent” and “Sweeney Todd.”

The ownership eventually shifted to Kurt and Sherry Wehner who successfully created the Woodlawn Theatre we see today.

The theatre is along Fredericksburg Road in an area known as the Deco District in San Antonio.

The theatre is devoted to providing quality children’s programs and performances, which promise to “enrich, entertain and enlighten.”

While the theatre looks to host around six shows a year, what makes the Woodlawn Theatre so extraordinary is that all actors for the shows are unpaid volunteers.

“The actors perform because they have a passion for acting and love doing it,” stated Artistic Director and resident choreographer of the theatre Chris Rodriguez.

“Anyone can audition. We have talented people that are doctors, lawyers—they all volunteer his or her time.”

While Rodriguez hopes that the city will eventually provide grants to pay the actors, he stresses that the shows are all high quality performances by a number of different directors, choreographers and actors.

Its biggest program, The Woodlawn Academy for Performing Arts, brings a successful mix of onstage and offstage education to children ages five to 18.

“We have 150 kids involved in the program now, and we focus on teaching them the whole experience of what it is to put on a show,” said Rodriguez.

The student program features three different age groups: youth, middle school and high school, and each year the students work in their individual classes to bring their own version of a performance to the main theatre. This year will be “Hairspray.”

Rodriguez stresses that the classes feature far more than just preparation for the performance.

“Part of the class is preparing for performance but we dive into character work, theatre terms,” stated Rodriguez.

“It changes each semester so they are constantly getting a different experience.”

Another emerging feature is “Broadway Nights,” a performance that takes place after shows every Saturday at 10:30 p.m. During the performance, a guest is chosen to come and sing songs that highlight themselves, alongside a piano.

Created by Youth Administrative Director Rebecca Trinidad, the show is free to anyone who brings sheet music, signs up and can sing in a comfortable open-mic setting.

With its emerging programs and success, the Woodlawn Theatre is the perfect place for anyone looking to volunteer, or to simply watch and enjoy local theatre.

“We want to continue raising the bar with theatre in the community and San Antonio and hope to continue working with other non-profits to provide the best experience,” stated Rodgriguez.

Currently, the Woodlawn Theatre is performing the hit rock musical “Rock of Ages;” it will run from Feb. 5 to March 6.

UTSA community members can receive discounts on tickets by purchasing online and presenting their UTSA ID at the door.