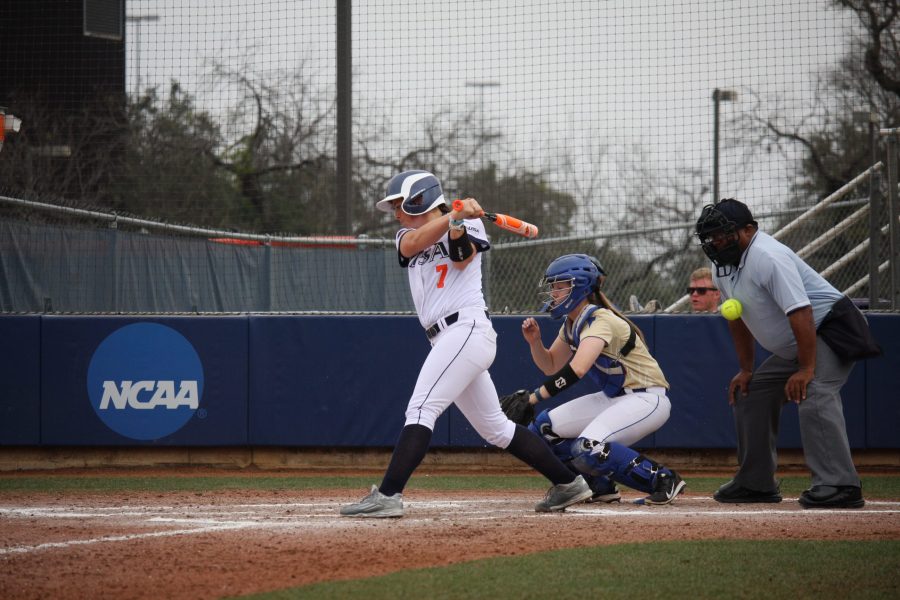 The UTSA Softball team struggled before conference play began, starting the season with a 6-16 record. The Roadrunners began conference play by sweeping a series against North Texas (18-12, 3-6 C-USA)  and winning 2-of-3 games against Charlotte(18-14, 2-7 C-USA).

On Tuesday, March 22, UTSA entered the bottom of the first inning already down to Baylor by four runs, but quickly responded with a pair of home runs from Tess Sofejie and Kaley Pyles.

In the second inning, Lizzy Fox replaced UTSA’s starting pitcher, Chelsea Parker, and gave up only one home run from Baylor’s Sarah Smith in the fifth.

UTSA responded with runs from Angelina Nino and Lindsey Knowles. Unfortunately, UTSA was unable to finish the rally and was defeated 6-5.

“Against Baylor, we showed a lot of fight; we got down right away but we fought back. Against a top-20 team in the nation, that’s always a positive for us,” said Head Coach Michelle Cheatham.

In the rubber match on Saturday, both clubs struggled to score until MTSU got on the board in the fifth inning with a single home run from Austyn Whaley and an illegal pitch from relief pitcher Nicole Merrill. UTSA countered immediately with runs from senior left fielder Jade Smith and sophomore pinch hitter Kendall Burton.

Later in the seventh, down by three runs and with two outs on the board, Zoe Bacon hit a three-run home run that tied the score and led to extra innings. The Roadrunners, however, were unable to capitalize as MTSU scored two runs in the eighth inning and defeated UTSA 7-5.

In spite of the losses, Cheatham was proud of her team’s efforts against last week’s stiff competition.

“We just have to continue to grind,” said Cheatham. “We have to score early and often, because anybody can beat anybody in this conference.”