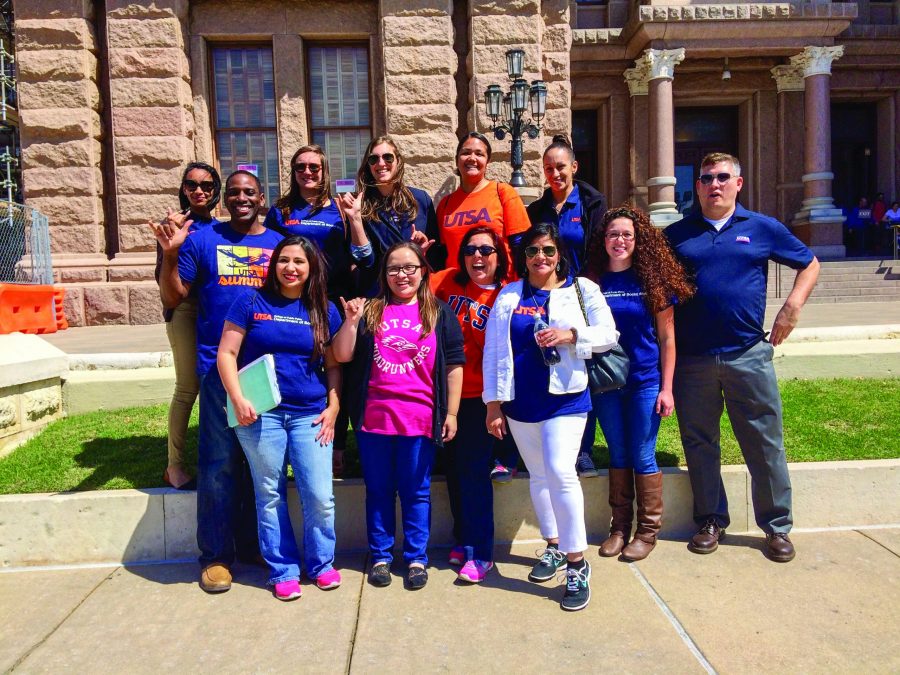 “I want to talk about something that’s not talked about enough,” intoned UTSA graduate student Bianca Ramirez, as she introduced herself from behind a podium positioned in front a crowd gathered for a rally at the Texas Capitol building on March 22nd.

She wanted to talk about child care.  University provided child care for student-parents, that is.

Ramirez helped organize a group called “Downtown Campus Matters Too” to point out an the disparity for downtown campus student-parents. While all students pay a tuition fee for child care, the services are currently only provided on the Main Campus. Ramirez calls this missing child care service “a complete barrier to attaining a degree.”

As of yet, the group’s problem remains unsolved, but momentum is up. Ramirez said “right now we are gaining more students wanting to help us with this advocacy who are passionate about this issue and want to see change.”

Andrew Hubbard, President-Elect of UTSA’s Student-Government Association, this issue explained that “We have been speaking with students on new innovative ideas on how to solve this student concern. We also have been speaking with community partners on possible solutions as well. Hubbard stated that once concrete solutions are about to be rolled out, he’d be happy to discuss this further.

Ramirez has also gained new-found community partners, finding support among the rest of San Antonio’s college institutions. “At one of the rallies I met a professor from Our Lady of the Lake University and he stated that we have inspired student-parents at OLLU to advocate for child care at their school too,” she explains.

As their numbers grow, these student parents plan to take their demands beyond just UTSA, where the organized for child-care began. In May, Ramirez and the group will be submitting a proposal to the UT Systems Office of Regents in Austin.

Despite’s the group’s progress, at UTSA, Ramirez laments the cause getting stalled. She explains “the child care advocacy group as a whole tried to meet with President Romo, but they did not let us speak to him and they wanted us to go through the chain of command.” After multiple attempts the president’s office could not be reached for a comment.

Hubbard, interested in paying attention to both campuses, says “Bianca shows the dedication and determination that makes UTSA students great. It is our [SGA’s] desire to do everything we can to pave a way for students to graduate smoothly and ensure that their voices are represented. Students at the DT campus have unique needs. With our DT task force we look to represent those unique needs in an accurate way.”

With almost all the relevant parties in order and willing to begin discussing a solution, one hopes child-care will be forthcoming. In the meantime, Ramirez and student-parents like her will keep the pressure on. “We are all very dedicated to this advocacy and we will definitely keep working on this until something is done and we will be having meetings every month to discuss plans of actions to keep this advocacy moving forward.”
As for the very next step, Ramirez will meet with SGA on Thursday to present a proposal.

The group “Downtown Campus Matters Too,” now called “UTSA Downtown Campus Child Care Initiative” will be holding a rally on April 11th in the Sombrilla from 11:30 a.m. to 1 p.m. to raise awareness about the group’s effort’s.

For more information on the issue, visit: https://www.facebook.com/UTSADTMattersToo/?fref=ts