UTSA drops 2-of-3 to Florida International 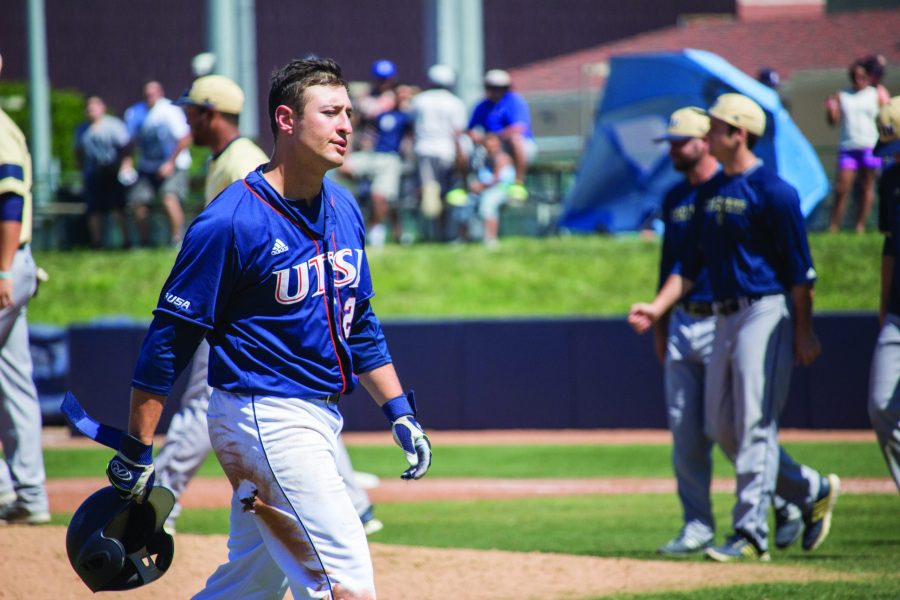 Photo by Brady Phelps, The Paisano

A three-game series against the Florida International University (FIU) Panthers (15-16, 4-5 C-USA) started with promise on Friday, April 1, but ended with disappointment when the Roadrunners fell 8-4 in the rubber match on the following Sunday afternoon.

Sunday’s loss was the Roadrunners’ eighth loss in the last nine games.

The series started off well for the Roadrunners, as they won game one 6-0 with strong pitching performances from senior Aaron Burns from Jarrell, Texas and junior Andre Shewcraft from Pearland.

However, things quickly took a dive as the Roadrunners lost Saturday’s game by a score of 12-to-4.

Sunday’s game went scoreless until the Roadrunners took a 2-0 lead when a single by junior catcher Mason George in the bottom of the fifth inning allowed two runners to score.

The fifth inning was the last in which junior Karl Craigie appeared on UTSA’s mound. Craigie ended the day having given up five hits and two runs in five innings pitched.

The Panthers responded immediately, putting up three runs in the top of the sixth. The Roadrunners put runners on second and third base in the bottom of the sixth, but failed to score – a crucial missed opportunity for a potential momentum swing.

In the seventh, the Panthers had a three-run home run and a single home run to take a 7-2 lead. UTSA failed to create offense for the second inning in a row.

Trailing 8-2 in the final inning, UTSA found a glimpse of hope for a comeback as C.J. Pickering hit a single with the bases loaded to make the score 8-4. However, the runs came with two outs already in the bottom of the ninth, and the Roadrunners failed to get on base again.

Senior pitcher Patrick Herbelin, who gave up three runs on three hits in one inning pitched, took the statistical loss for the Roadrunners on Sunday. When asked about the team’s recent struggles, UTSA Head Baseball Coach Jason Marshall immediately turned his attention toward the mound.

“We’re not throwing strikes. That’s the key,” stated Marshall on Sunday. “I told the team, ‘change happens when we start getting ahead in the count and we have the upper hand on the mound.’”

The Roadrunners (11-16, 2-7 C-USA) travel to San Marcos on Tuesday to take on Texas State (18-10, Sun Belt Conference). They will then return home and play a three-game series against No. 5-ranked conference opponent Marshall (15-11, 5-4 C-USA) starting on Friday, April 8 and concluding on Sunday, April 10.