‘Reasons to Be Pretty’ asks the hard questions 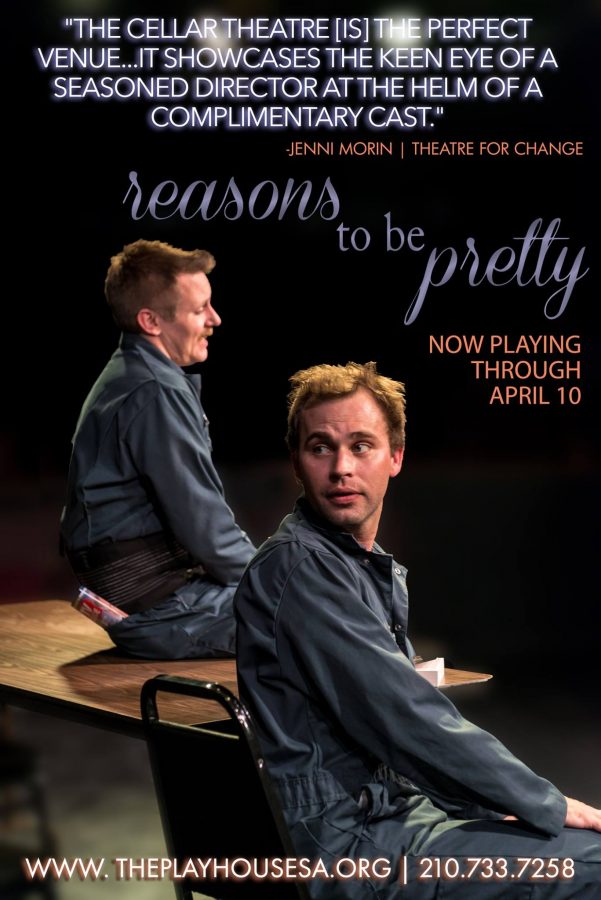 Photo Courtesy of The Playhouse SA

Pulitzer prize-winning poet Edna St. Vincent Millay once stated “Beauty is whatever gives joy.” Observing the arguments and revelations between characters in Neil LaBute’s newest drama-comedy “Reasons to Be Pretty,” one could also conclude that beauty can be whatever drives you mad.

“Reasons to Be Pretty,” showing this weekend at The Playhouse in San Antonio, follows the seemingly normal life of Greg (Ty Mylnar) as he traverses the close-knit relationships within his circle of friends, including his workplace buddy Kent (Nathan Thurman), his wife Carly (Ashley Greene) and most importantly, his girlfriend Steph (Laura Michelle Hoadley).

When Greg’s offhand comments to Kent about how his new female coworker’s pretty face surpasses that of his current girlfriend Steph get back to her, she is appalled and hurt by Greg’s comments. Despite his meaning no harm, this leads to their subsequent break-up.

Just as Greg is learning to deal with his own relationship problems, Kent and Carly enter the picture with problems of an unspoken infidelity with a new girl in their own relationship. This begins to seep into Greg’s simple life and complicates his emotions even further. As they struggle to overcome the lies, cheating and betrayals of everyday relationships, the friends must each answer an important question: what is the worth of being “pretty,” and why does it matter?

LaBute has crafted “Reasons to Be Pretty” as a critique of our shallow obsession with ourselves and pre-conceived notions of beauty: millennial ideas that are often projected from the audience onto the characters. Your humble reviewer would often find himself laughing at the silliness of Greg’s fight with Steph over a trivial comment that in theory wasn’t disparaging towards her appearance, while also feeling sympathetic towards Steph and her not-so-uncommon problem many women face in regards to feeling pressure put on by society’s obsession with impossible beauty standards.

The sets, simple and unfettered, reflect the blue collar ethos of the characters’ lives as their repartee takes place within the confines of warehouse break rooms, outside bars and at baseball fields. Steph holds down a job as a hairdresser at the beginning of the play, while Carly operates as a security guard at the same place Greg and Kent work as warehouse movers. Conversations reflect the teeter-totter struggle between intellectual and working class, with broad discussions referring to the importance of “TV Guide,” who Clarence Darrow is and why Greg is always reading classic literature like Poe and Hawthorne.

Of course, you need actors who can realistically show the nuance of a script that deals with real-life emotions, blue-collar ethics and even a macho dug-out fight. Ty Mylnar plays main character Greg with a surprising amount of versatility, traversing the complexities of the character as he grows from shy boyfriend to scorned lover to exasperated, not-so-nice guy. Laura Michelle Hoadley navigates Steph’s transformation well from shrieking scorned lover to recovering emotional wreck, and Nathan Thurman’s puppy-dog frat-boy act is deceptively charming and reveals layers of machismo and insecurity beneath his lithe and tall figure, even if the relationship with Greene is questionable due to the small amount of time spent with the two of them on set together.

Does the play fully answer the question of its title? Not quite. Each character is afforded a monologue of some kind that deals with the many modern complexities of relationships in an age where infidelity is just a text message away, though LaBute could better get his message across more subtly through conversations and intimate moments between characters.

Arguments are said to be their own art form, and the play is full of them; but it’s the little moments, where Greg relays Kent’s infidelities to Carly with human interaction, putting her hands in his, that show the human spirit can be reason enough to be pretty.

Tickets for the play’s last weekend are available this Friday and Saturday at 8 p.m. and Sunday at 3 p.m.