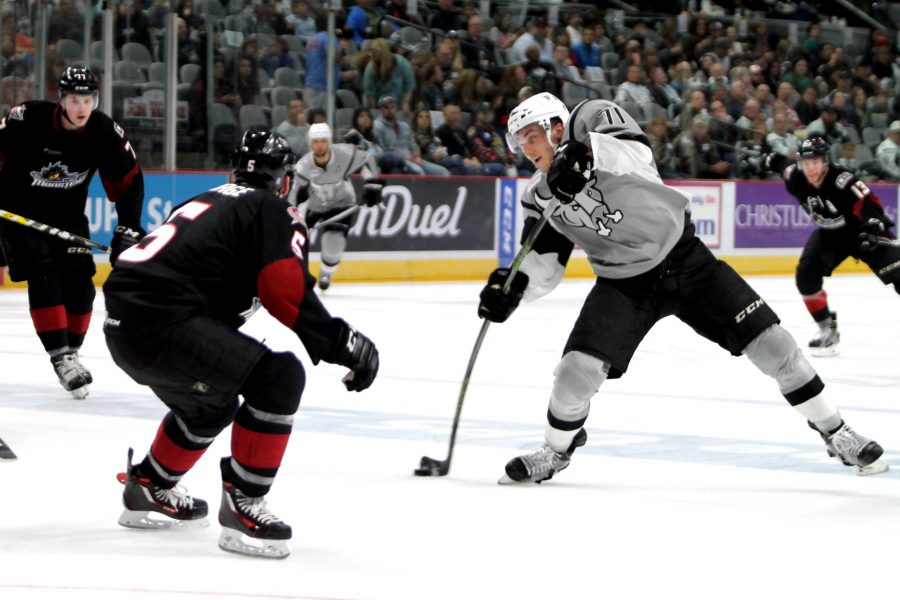 Borna Rendulic takes a wrist shot in a game against the Lake Erie Monsters. Photo by Shelby Rose, The Paisano

Veteran netminder Reto Berra made 36 saves to keep the Rampage within one goal until Croatian forward Borna Rendulic potted one to tie the game at three apiece and send the San Antonio Rampage and Iowa wild to overtime on Friday night at the AT&T Center.

Captain Ben Street scored the lone goal in the shootout to secure the Rampage’s sixth straight home win – just one away from a franchise record.

The first period went scoreless and the Wild outshot the Rampage 15-6; Berra had to be sharp early to keep the Wild off the board.

The Rampage struck first six minutes into the second period when deft passes from Rendulic and Nick Drazenovic set up forward Joey Hishon for his 14th goal of the season.

Wild forward Mario Lucia evened the score ten minutes later with a snap shot from just outside the goalie’s crease that beat Berra on his glove-side. The game remained tied at one goal apiece for the rest of the second period.

Just one minute into the third period, Rampage forward Sam Henley sprung the Rampage offense with a breakout pass to Rendulic at center ice and then headed directly for the net. While gliding into the slot with speed, Rendulic put the puck between his own legs to get past a Wild defender, but instead of heading for the net, he curled back to the left faceoff dot to survey his options.

As the Wild defensemen, arriving to defend their net, and Henley, the net-driver, created traffic in front of Wild goalie Leland Irving, Rendulic shot the puck from the left circle, creating a rebound that Irving could not control. Henley beat two Wild defensemen to the rebound and put the puck into a wide open net.

Five minutes into the third period, Wild forward Zack Mitchell received a pass in the slot and pivoted to put a backhander towards the net that deflected past Berra off the stick of 6-foot-7, 255-pound defenseman Joe Finley.

Just 42 seconds later, Wild forward Chase Lang picked up a loose puck in the neutral zone, gained the Rampage blue line and left a quick drop pass for Finley, who buried a slap shot from distance to give the Wild a 3-2 lead.

The Rampage continued to apply pressure throughout the third period, and it finally paid off when winger Dennis Everberg and Street combined for a chance that earned the team an offensive zone faceoff with under a minute remaining and an extra attacker on the ice.

After a faceoff win from the captain, Mikko Rantanen sent a pass from the left point to Everberg below the goal line. Everberg made a move to the net and sent a backhand pass across the crease for a waiting Rendulic, who shot a one-timer past Irving with 20 seconds left and sent the 8,800-member crowd at the AT&T Center into a roar.

Rendulic’s game-tying goal extended his goal streak to four games and gave him his third point of night, earning him first-star honors.

“I feel like I’ve been playing the same game,” said Rendulic after the game. “It’s just going in now, you know?”

Playing on the wing of Rantanen, the team’s leading scorer – who just earned AHL second-team All-Star and All-Rookie Team honors – has certainly contributed to Rendulic’s cashing in on more chances.

“Playing with Mikko has been great,” said Rendulic. “He’s a great player. I just want to give him the puck and let him do his own thing; go to the open area, and I know he’ll find me there.”

“(Rendulic) is getting to the right areas,” said Head Coach Dean Chynoweth. “He’s a guy we thought we’d get greater production out of earlier, but he’s been streaky at times. He has put points up, and then he’s gone dry for a bit.”

“Obviously playing with Mikko doesn’t hurt,” Chynoweth continued as “Wonderwall” by Oasis was blasted from the Rampage locker room. “They seem to have a little bit of chemistry…and he’s played with Dennis as well at different times, so they seem to know where one another is.”

Both teams traded chances in 3-on-3 overtime – the most notable being a breakaway chance by Iowa winger Marc Hagel that Berra handled calmly – until five minutes passed without a goal and the game headed to a shootout.

The Rampage shot first and each teams’ first two shooters failed to score. Captain Ben Street was the Rampage’s third shooter, and on a tip from Hishon, he sent a snap shot past Irving from the middle of the slot.

“I asked Hish on the bench if (Irving) was coming out real far,” said Street. “Hish said, ‘I think you’ll be able to go low-blocker.’ So when I came in, I thought I saw it and just tried to rip it there.

“You try to help each other out,” continued Street. “Send the first guy out and see what he sees, and (Hishon) was right. So, I got to give him a bunch of credit on that.

The Rampage will look to win their seventh game in a row at home in a rematch with the Wild on Saturday night. If they win both of their remaining home games, they will break a franchise record for most consecutive wins at home. The impressive stretch of play comes too late to make a real difference in the standings, but it something the team can use to take a positive mindset into the offseason.

An interesting quirk about a hockey locker room is that it can be eerily silent after a loss – but when the team wins, the music playing from the locker room will often drown out whatever is happening in the hallways just outside. The victory music tends to be something energetic to which the players can dance. But even after a win that continued a significant streak, the music choice on this night was less than jovial.

“It’s been a bit of a trying season,” said Street with “Bittersweet Symphony” by The Verve playing from the Rampage room – setting an appropriate tone after a narrow win that means little this late in the season. “It’s nice to salvage something at the end here. Even if we’re not going to get in the playoffs, it’s nice to find that.”

When asked who was choosing the music that night, Street quipped, “I don’t know…the Euro guys, I think. It’s terrible.”

You can find an audio clip from Street’s interview below: