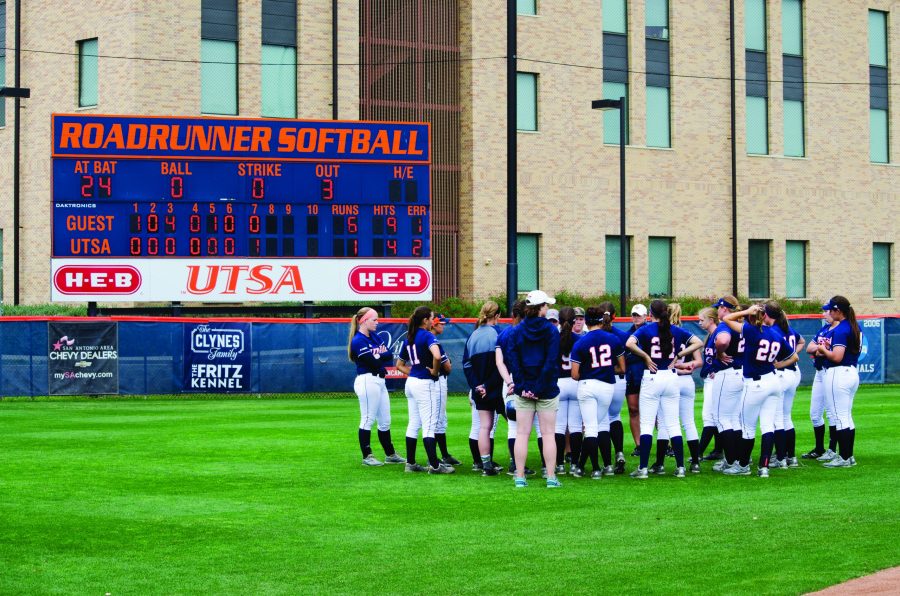 Before the 2015-16 softball season began, UTSA Softball was projected to finish fourth in Conference USA (C-USA), where they currently stand with a 8-7 record. However, the Roadrunners have entered a midseason slump, having lost seven of their last 10 games.

On April 6, with a chance to upset the Texas Longhorns (27-10, 2-3 Big-12), the Roadrunners played a tight game in front of a sold out crowd at Roadrunner Field.

Tess Soefje, Kendall Burton and Jade Smith earned hits for the Roadrunners. Burton and Soefje also hit their first and sixth home runs of the season.

Starting pitcher Nicole Merrill gave up two earned runs on five hits with four strikeouts. Three of the hits came from Celina Felix, who also hit the game-winning home run in the top of the seventh inning.

UTSA had a chance to win in the bottom of the seventh inning with two outs and the bases loaded, but were unable to capitalize and lost 3-2.

On April 9, UTSA hosted the Southern Mississippi Golden Eagles and split the first two games. Southern Miss won the first match 3-1, scoring all three of their runs in the fifth and sixth innings. UTSA won the second matchup of the day with a score of 7-4.

On Sunday, after a one-hour rain delay, the Roadrunners struggled, allowing four runs in the third inning. Southern Miss also scored on two unearned runs in the first and fifth innings.

UTSA’s lone run came on a single home run from Randee Crawford – her 11th home run of the season.

Many of the Roadrunners’ frustrations were apparent throughout the game.“There have been some games mixed in there that we’ve had an opportunity to win,” Head Coach Cheatham said. “It’s just the will to do whatever it takes.”