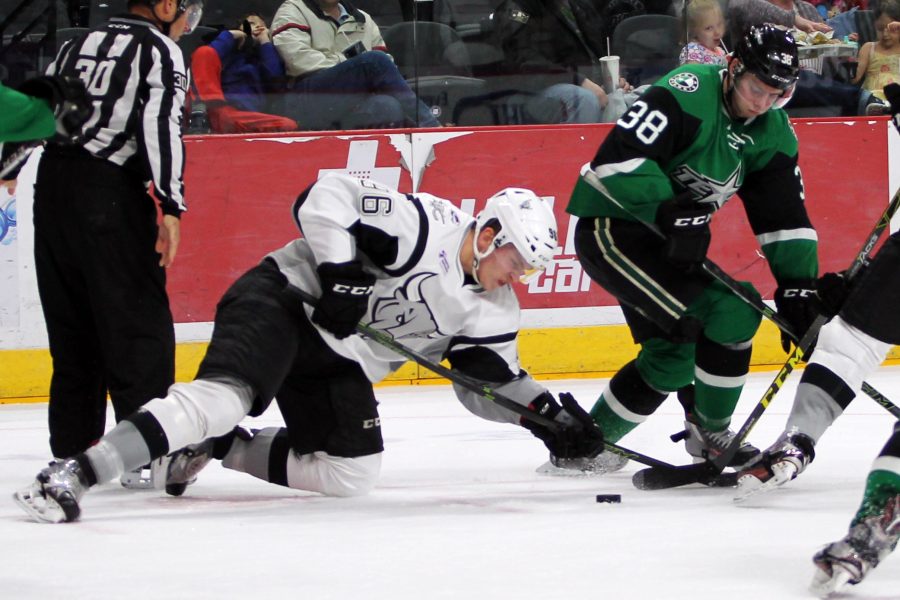 With a loss to the Manitoba Moose at home on Friday, April 15, the San Antonio Rampage (33-35-8) ended their first season as the American Hockey League (AHL) affiliate of the NHL’s Colorado Avalanche in last place in the Pacific Division with a win percentage of .487.

The Rampage certainly had a streaky inaugural season. They went 9-2 in their last 11 games, including winning streaks of four and five games. In the previous 11 games, they went 1-10-1. Between November and January, they set the franchise record for longest home losing streak at 13 games, and just before the season’s end, they tied the franchise record for consecutive home wins with seven.

“I’m extremely disappointed with how it played out,” said Head Coach Dean Chynoweth. “(We) want to be playing meaningful games at this time of the year, and that wasn’t the case.”

The 2015-16 season was Chynoweth’s fourth as the head coach of the Avalanche’s AHL affiliate; when Colorado switched their affiliation from the Lake Erie Monsters to the Rampage, Chynoweth made the move to San Antonio. His teams have missed the playoffs in all four seasons, and this season’s .487 points-earned percentage was the lowest in that span.

Some of the Rampage’s strategic problems are clear; the most apparent is their consistently being outshot by opposing teams. They went 16-4-5 for 37 points (.740 points percentage) in 25 games in which they outshot opponents and 17-29-3 for 37 points (.378) in 49 games in which they were outshot. Over the course of the season, they had the third-worst shots-for differential (shots-for divided by total shots) at 46.93 percent.

San Antonio’s power play efficiency finished right around league average, and only five teams had a worse penalty kill. They struggled to keep leads all season; only one team had a worse points earned percentage in games in which they scored the first goal.

The season wasn’t all doom and gloom, however. The Rampage were led in scoring by 19-year-old Finnish rookie forward Mikko Rantanen in his first professional North American season. Rantanen’s 24 goals and 60 points in 52 games placed him first among rookie scorers and sixth overall in AHL scoring. In 52 games played for the Rampage this season, Rantanen went .

Rantanen’s superb season earned him the shared honor of the AHL’s Garrett Award, given to the most outstanding rookie. The award was shared because Rantanen tied in voting with 22-year-old undrafted Providence Bruins forward Frank Vatrano, who scored 34 goals and 51 points in 34 games.

Rantanen’s transition to North American hockey went smoothly – much smoother than the rest of the team’s move from Lake Erie to San Antonio.

“I’m not going to lie, the move itself – not personally, but as a group and an organzation – has had its challenges,” Chynoweth said. “Hopefully by next year, we’re through all that.”

One of the challenges to which Chynoweth referred include sub-par ice conditions at not only the AT&T Center, but also the team’s practice facility, the Ice and Golf Center at Northwoods.

“We said we weren’t going to use the ice as an excuse,” said Chynoweth, “but at the end of the day, it became one. That’s a challenge for me as a coach…(I) have to keep the group focused.”

The ice at AT&T could use improvement, but the rest of the facilities are top-notch. However, the facility in which the team practices – the Ice and Golf Center at Northwoods – are not up to the standards of a practice facility for a team that plays at one of the highest levels of professional hockey.

“When this sheet (at the AT&T Center) isn’t here, (Northwoods) is the only sheet of ice in San Antonio, which was baffling for us,” said Rampage captain Ben Street. “I’ve never seen that before.”

“The facilities (at Northwoods) weren’t as nice as we’ve had in other places, and it’s been addressed through Colorado,” Street continued. “Sounds like they’re going to do a good renovation there. They’re going to make the weight room a lot bigger. The coaches’ office is in a portable outside; that’s going to move inside. I think they’re going to take a wall out of the locker room and make it a bit bigger. I think if we get the practice rink shored up, it’ll actually be one of the better facilities in the league.”

“That will be a huge asset going forward,” said Chynoweth, commenting on the upcoming renovations.

Hockey franchises in “non-traditional” markets often run promotions in which fans can get tickets for free or next-to-nothing. That said, the attendance figures may not reflect the actual number of tickets sold, but regardless, the Rampage marketing team has done a fine job of getting people into the building despite the team’s lackluster performance. However, their average attendance figures have dropped in each of the past three seasons and the only chance they have at getting back into the top-10 in attendance is to win, especially at home.