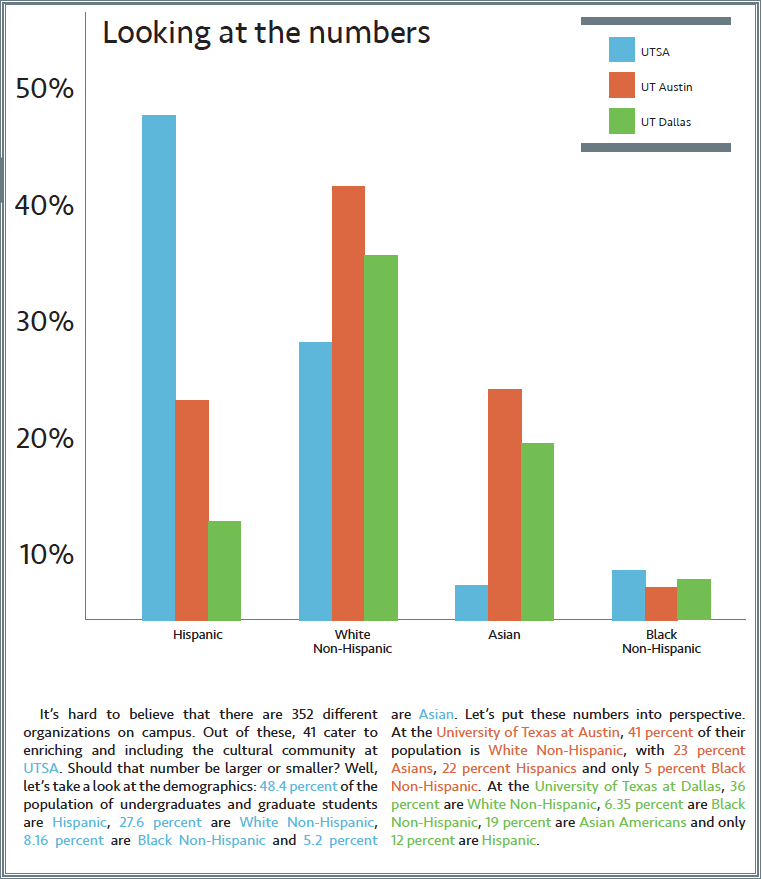 The Hispanic Majority Ideal
“These statistics are appropriate to our geographic location. San Antonio, being very close to Mexico, is primarily Hispanic.”

“You don’t really see it (The Hispanic majority), but you feel it,”

“Though it’s a bit more diverse than the other campuses I’ve been to (Texas State and UT Rio Grande), in a way (UTSA) is predominately Hispanic; a lot of people speak Spanish here.” He continues, “As I’m working, I see a mix of races, but a lot of them look Hispanic.”

“I understand that we’re a predominately Hispanic Institution, even with veterans.” He goes on to say, “However, there is a good representation of ethnic groups on campus. We don’t discriminate against any organizations encourage a lot of students to create new organizations.”

“We like to embrace differences and like to find the common ground between groups.” He adds “I think it is a pretty cohesive campus and there’s obviously more we can do with student engagement.”

Diversity! Diversity! Diversity! – The Counter Argument
“Our campus is more diverse than the average (college) campus.” He said firmly. Responding to the statistic of UTSA having a 48.4 percent Hispanic population. He disagrees, “I actually don’t think it’s Hispanic dominated, when I came (to UTSA) as a freshman in 2013, I saw a lot of other races other than Hispanic!” He exclaims. “It’s a good thing that there is a lot of diversity, but we like unity.” Edward adds, “I don’t like putting all the diversity together…because there is so much diversity everyone hangs out in their own cliques of their own races.”

“There are so many international students and more of a diversity of young people getting their degree in this generation which is great.” Maria had completed her BBA at a University in San Antonio approximately 15 year prior and confides, “I’ll be honest, it wasn’t as diverse then.” She continues, “I would say since San Antonio is a predominately Hispanic city, it makes sense that UTSA is more Hispanic. There is more of a stress on the importance of getting an education now…The commuters are all native to San Antonio and often they don’t hang around after their classes, or come to eat or study on campus because they go back home.”

So what does all of this mean? Clearly the statistics show that UTSA has a very high Hispanic population. But according to the majority of the students, it doesn’t seem that way at all. Yes, the numbers of Hispanic students are high, but as most of them live in San Antonio they spend very little time on campus, whereas most of the international students, hence the diversity, live on campus and are more visible. College campuses have definitely become a lot more diverse in the last decade according to the U.S Department of Education with the number of Hispanics and Latinos increasing from 1.8 million to 2.9 million. Statistics have shown that compared to the average college campus, UTSA is more diverse, just as students predicted. For example the University of Michigan’s demography is 4.6 percent Hispanic, 56.2 percent White Non-Hispanic, 4.1 percent Black Non-Hispanic and 11.2 percent Asian. This puts the demography of our university in a new perspective, where it can be appreciated.