Why is it “cute” to have a mental illness? 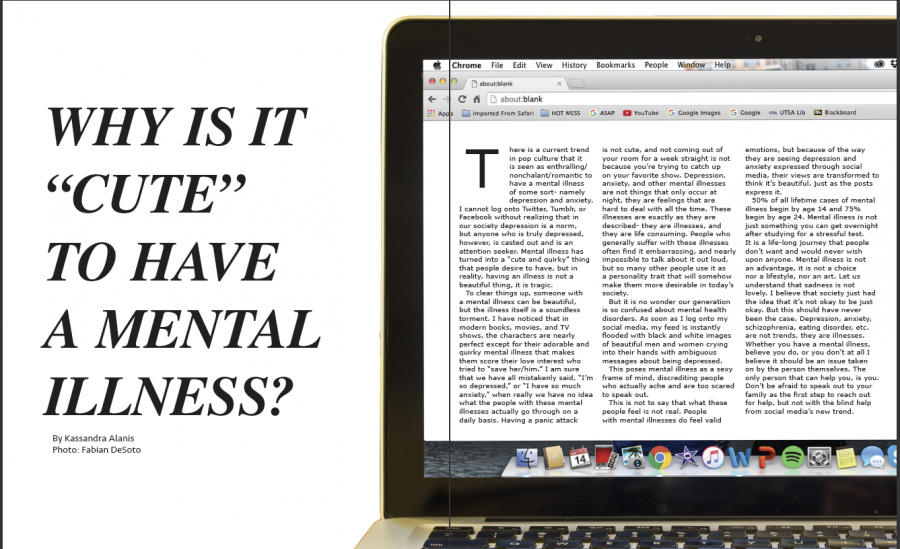 There is a current trend in pop culture that it is seen as enthralling/nonchalant/romantic to have a mental illness of some sort — namely depression and anxiety. I cannot log onto Twitter, Tumblr, or Facebook without realizing that in our society depression is a norm, but anyone who is truly depressed, however, is casted out and is an attention seeker. Mental illness has turned into a “cute and quirky” thing that people desire to have, but in reality, having an illness is not a beautiful thing, it is tragic.

To clear things up, someone with a mental illness can be beautiful, but the illness itself is a soundless torment. I have noticed that in modern books, movies, and TV shows, the characters are nearly perfect except for their adorable and quirky mental illness that makes them score their love interest who tried to “save her/him.” I am sure that we have all mistakenly said, “I’m so depressed,” or “I have so much anxiety,” when really we have no idea what the people with these mental illnesses actually go through on a daily basis. Having a panic attack is not cute, and not coming out of your room for a week straight is not because you’re trying to catch up on your favorite show. Depression, anxiety, and other mental illnesses are not things that only occur at night, they are feelings that are hard to deal with all the time. These illnesses are exactly as they are described- they are illnesses, and they are life consuming. People who generally suffer with these illnesses often find it embarrassing, and nearly impossible to talk about it out loud, but so many other people use it as a personality trait that will somehow make them more desirable in today’s society.

But it is no wonder our generation is so confused about mental health disorders. As soon as I log onto my social media, my feed is instantly flooded with black and white images of beautiful men and women crying into their hands with ambiguous messages about being depressed.

This poses mental illness as a sexy frame of mind, discrediting people who actually ache and are too scared to speak out.

This is not to say that what these people feel is not real. People with mental illnesses do feel valid emotions, but because of the way they are seeing depression and anxiety expressed through social media, their views are transformed to think it’s beautiful, just as the posts express it.

50% of all lifetime cases of mental illness begin by age 14 and 75 percent begin by age 24. Mental illness is not just something you can get overnight after studying for a stressful test. It is a life-long journey that people don’t want and would never wish upon anyone. Mental illness is not an advantage, it is not a choice nor a lifestyle, nor an art. Let us understand that sadness is not lovely. I believe that society just had the idea that it’s not okay to be just okay. But this should have never been the case. Depression, anxiety, schizophrenia, eating disorder, etc. are not trends, they are illnesses. Whether you have a mental illness, believe you do, or you don’t at all I believe it should be an issue taken on by the person themselves. The only person that can help you, is you. Don’t be afraid to speak out to your family as the first step to reach out for help, but not with the blind help from social media’s new trend.