Evening of poetry at The Twig 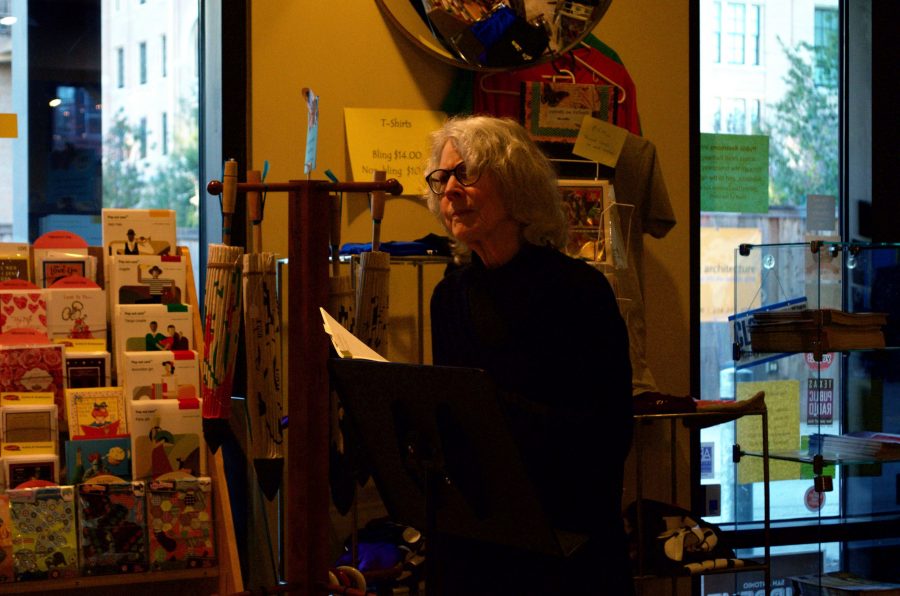 On Sunday, Jan. 31, The Twig Bookshop in The Pearl in downtown San Antonio had the privilege of hosting an “Evening of Poetry” with renowned poets: Director of the Trinity University Press, Barbara Ras, Poet-in-Residence Dr. Wendy Barker  and  professor of creative writing at UTSA, Pearl LeWinn.

To open the evening, and reading to a sizeable crowd of around thirty, Ras read a few of her poems, namely “The Cone-Bearer” and “Washing the Elephant.”

She explained that she had several sources of inspiration for “Washing the Elephant,” including a memory of watching the Ringling Brothers Circus elephants parade through New York at two in the morning and an art video depicting two young boys reverently washing a water buffalo with painted ears.

The poem describes her contemplation of guilt and desire, both of which, like an elephant, appears large and looming, yet demand care.

Ras concluded her segment with “Manu’s arms,” which describes her recollection of a basketball game rudely interrupted by a bat’s flight around the stadium.

Dr. Barker then took the stage, opening on a somber note with “Composition in Gray,” which she wrote soon after her mother died. However, it still rings true for her with the  recent loss of one of her friends. Since the loss of her friend, Barker said, “(She hasn’t) been able to write anything good yet.”

Barker then read a few of her other poems, including “Apology for Blue,” “Teaching Mrs. Dalloway” and “I hate telling people I teach English.”

The poems ranged in style and tone and describe a variety of topics, from the peculiar and relatively short history of the color blue to a light-hearted venting of her frustrations outside the classroom.

In an interview following the reading, Barker discussed some of her biggest challenges in her 50-year teaching career. A common piece of advice Barker gives to her students is “Try not to intellectualize it at first…slow down, read a poem out loud.”

She explained that poetry requires time to understand, let alone write, so one of the best practices is to slow down, focus on what one feels at first and then focus on “picking it apart.”

When asked what advice she would give to young poets and writers, Barker said to use knowledge and research skills to inform poetry, to participate in the nurturing environment of workshops and, most importantly, “want to do it.”