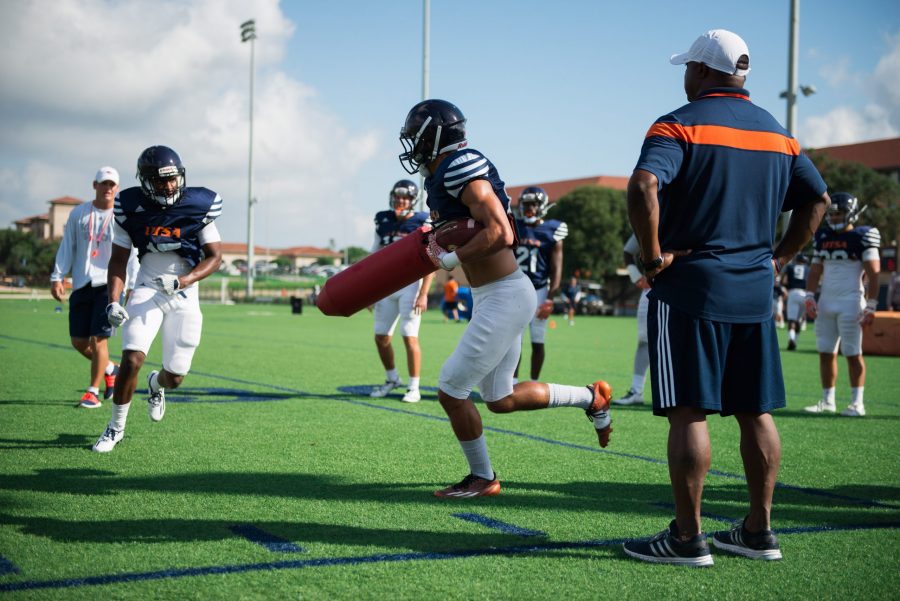 There is something new on the horizon of UTSA football and it smells like new business and new methods.

A lot of heads are turned toward the football program to see what the new coaching staff has up their sleeves. The football program is well off the ground and is beginning to take its first big steps. Only time can tell which direction they’ll go.

UTSA football’s win-to-loss ratio over the past seasons, 4-8 in 2014 and 3-9 in 2015, has been nothing to write home about, however, being that the football team was in its formative years, expectations could have only been so high.

The first game of the season will take place this Saturday (Sept. 3) and all eyes are on the Roadrunners as they take on Alabama State.

Coach Wilson explained the kind of tone the coaching staff is trying to set on and off the field:

“We tell our guys to practice like a young pro…they practice swiftly, yet more than anything, mentally. Their mental approach is everything from split to stance to start to assignment…every rep counts. It could be the most minute movement, but it’s detailed to perfection,” he said.

“That’s what we want to instill in our guys, to be prepared to play the game both mentally and physically.”

With the new wave of coaches stepping on UTSA football’s turf, come new strategies and methods for becoming a power player in the Conference USA. There are different goals and a different plan of action. The UTSA community has placed their hopes for the UTSA football program in the hands of Frank Wilson.

Wilson is emphasizing the mental side of football to the team and the attention to detail necessary to be competitive in college football.

Additionally, Wilson and his staff have created a business-like atmosphere in the locker room where the level of focus rises as games approach.

“He’s a tough guy, and he expects a lot out of you. And that’s what any good coach would want from his players. He doesn’t ask anything less than the best from you. That’s what you want out of a coach, and that’s what a coach would want out of his team,” said senior wide-receiver JaBryce Taylor, who caught 29 catches for 472 yards last season. JaBryce Taylor will be one of the more prominent players on the roster this season.

When asked about the meshing of players with the new coaching staff, Wilson stated,

“I think we’re beyond the ‘new’ phase, except for actual game day, but I think the bond is there. The relationships are there. I think they’re sincere, and it’s allowing our coaches to be able to coach and at the same time have constructive criticism of our players.”

There are still many things to see when it comes to UTSA football. The transition between coaching staff can take time for adjustment, but the hope is that the games this season will lead to stronger relationships in the locker room.

The UTSA community is ready to be a threat in the Conference USA and this new era of UTSA football needs to not be as much about a change of faces as it is about leaps towards something different.

“The past is the past, and we’re not worrying about the past anymore. We’re gonna lay everything out there we can and execute what we’ve been taught,” said Taylor refering to UTSA’s past two losing seasons.

“It continues to build on the things we are already trying to establish from a traditional standpoint,” said Wilson.

With the game against Alabama State less than a week away, the coaching staff, the players and the fans are growing more anxious to see what this new season holds in store. A new era of UTSA football has arrived.