Explorations of sound and space 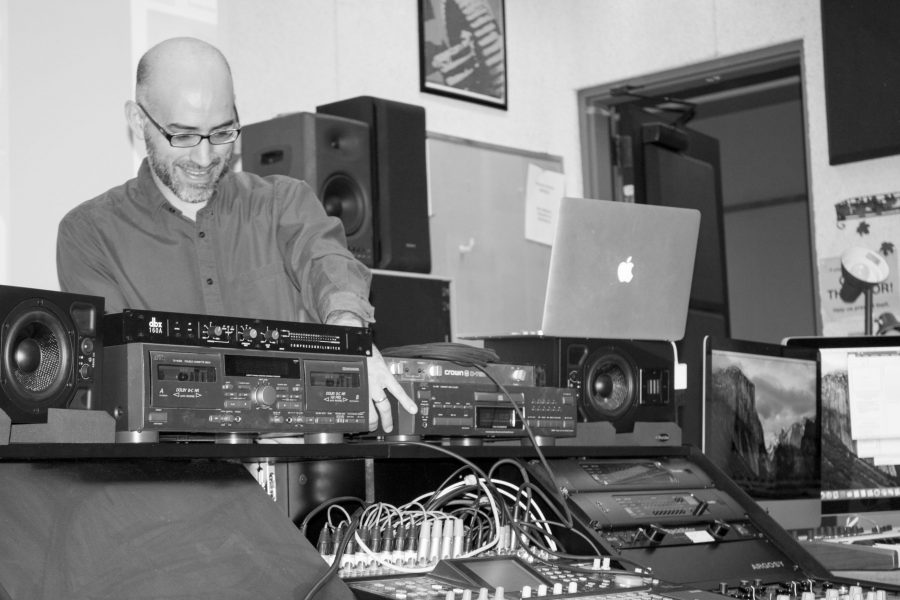 When Dr. Andrew Bergmann changed his major from physics to music halfway through his undergraduate studies at Brown University, he did not realize the two subjects would combine to form his focus of graduate study.

“One thing recording technology has done that’s really amazing and continues to stupefy me,” said Bergmann, “(is that) it has made it possible so that we can create music that doesn’t exist in real space.”

Bergmann pointed to The Beatles’ “A Day in the Life” as an example of a popular song that incorporates pockets of imaginary space, a concept that has existed in music only since the emergence of multi-track recording.

“The sound sources are obviously not from the same place, and the final product is still unified because there’s a certain artistic vision involved in making that track,” explained Bergmann. “And it doesn’t have to be limited by traditional physical spaces.”

After receiving his Bachelor of Arts in music from Brown, Bergmann completed a graduate program in jazz double bass studies at the Amsterdam Conservatory. He then worked some non-musical jobs in New York and performed in a cover band on the Wisconsin college scene before eventually settling in at the University of Minnesota for his doctoral program.

During his time studying composition in the Twin Cities, Bergmann became influenced by one of his instructors, Dr. James Dillon, and “New Complexity” music—abstract style of modern classical composition.

While in the doctoral program, Bergmann began to consider himself less of a traditional notational composer, and more of a producer. In his dissertation, he explained that the notational composer, whose final product is an instruction, has limited control over the actual sound of a composition.

Bergmann separated himself from this title. Instead, he referred to himself as a “producer” interested in the relationship between technology, performance and incorporation of improvisation into modern composition. In the creation of his dissertation, he aimed to combine elements of new complexity with the sensibilities of popular music.

Bergmann’s dissertation, “45 Minutes with 128 Musicians,” has never existed as a singular performance. Each musician’s contribution to the 7-part piece was recorded separately and edited together using a digital audio workstation (DAW).

“The criticism I got from my professors and people on my dissertation committee surrounded that idea,” said Bergmann. “Why are you trying to make some sort of improvisational piece when the people aren’t really communicating with each other?

“Why would you let go of the possibility of getting 128 people in a room and the amazing synergy that could happen if you had those people together?”

“My resources didn’t really allow me to even consider that in the first place,” said Bergmann, “but it was also an artistic question. Imagine everyone in this ensemble–is their agency the same if they’re among 128 people or if they’re alone? Am I going to get things out of them that I probably wouldn’t get if they were in a huge section?”

For one, isolating each musician allowed Bergmann to edit audio samples individually, something that would not have been possible with sounds from multiple sources bleeding into each microphone during the performance.

And since much of the score left room for participants to improvise, the actual composition of the piece largely took place in post-production.

“When I record everyone individually,” said Bergmann, “then I can do whatever I want with any moment. If I recorded everyone in a room, I wouldn’t have that possibility…I’m stuck with the sound that was made right there.”

The result is a vivid musical representation of living and working in the digital age. Sections of cooperative movement devolve into a spread of disparate elements—exploratory individual and small-group improvisation grounded by some semblance of rhythmic continuity. As the chaotic sound collage becomes almost too much to take, a unifying motif begins to form a groove and another impending cohesive climax seems apparent.

In Jan. 2015, Bergmann moved from Minneapolis to San Antonio to be closer to family, and quickly found work performing as a jazz bassist. That summer, he finished his dissertation and in the same week was hired by UTSA to teach music technology and manage the music lab.

The process Bergmann practiced in creating his thesis composition is a crucial experience as he transitions into running the music lab at UTSA. Without a traditionally structured studio—like Texas State University’s Fire Station studio—Bergmann turned to technology as a way to make the Arts building a functional recording space.

To address this issue, Bergmann purchased two new audio interfaces—devices that convert analog sound sources to digital signals—during his first year at the helm of the music lab.

But these new models use Ethernet to connect to other devices on the local network—a newish trend in recording called networked audio.

This means that practice rooms, classrooms and auditoriums in the Arts building could be turned into recording rooms connected to the interfaces in the music lab.

“We didn’t have a space on this campus to make a proper recording studio,” explained Bergmann. “(The music lab) works pretty well to record things; what’s lacking is the other rooms clustered around it that a traditional recording studio would have.”

But Bergmann’s own experience with unconventional production methods proves that a traditional studio environment is not necessary to create compelling recordings.

“We can be way more efficient in this space,” said Bergmann assuredly. “The technology makes it so that we can use our building in a completely new way.”

On the topic of the analog-digital divide, Bergmann said that there is room for both schools of thought. But he was quick to point out some creative benefits to working in the digital medium.

“The ability to change pitch independently of tempo – that’s only possible in the digital age, and that’s something that has changed music a lot.”

Bergmann’s own doctoral composition was recorded over 11 states and 14 countries–something that wouldn’t have been possible without the convenience of digital file sharing.

“The ability to freely move around data and information–that’s something that I employed in my piece,” explained Bergmann. “To get 128 people that I wanted with an extremely short budget, I had to have most people to do it for free. So everyone who I worked with could just receive a track and then send it back over the Internet immediately.”

Music technology courses have existed at UTSA for over 20 years now, due in large part to the work of Associate Professor Emeritus Dr. David Sebald, who was also an early adopter of the personal computer and the Internet as education tools. His passion for multimedia and dedication to incorporating it into the music department laid the framework for the program Bergmann inherited.

Bergmann’s enthusiasm to see the program evolve has already inspired students like Joshua Nava, who has begun the process of creating an audio club.

In the spring, Nava and other students began to informally gather in the music lab for “soundtracking” sessions, during which they screen old movies on mute and improvise their own scores.

Music technology currently exists as a certificate program primarily for music majors, but students of other disciplines can be admitted upon performing well in the introductory courses and with approval from the department’s music technology committee.

Bergmann has applied to convert UTSA’s Music Technology certificate into a minor program that is open to students of all majors. He sees the potential for a minor as a great option for students from other fields of study to get involved in the program.

But those students who are most passionate about seeing the community grow, like Nava, are hopeful that it’s just a step in the process of expanding audio technology into a full major.