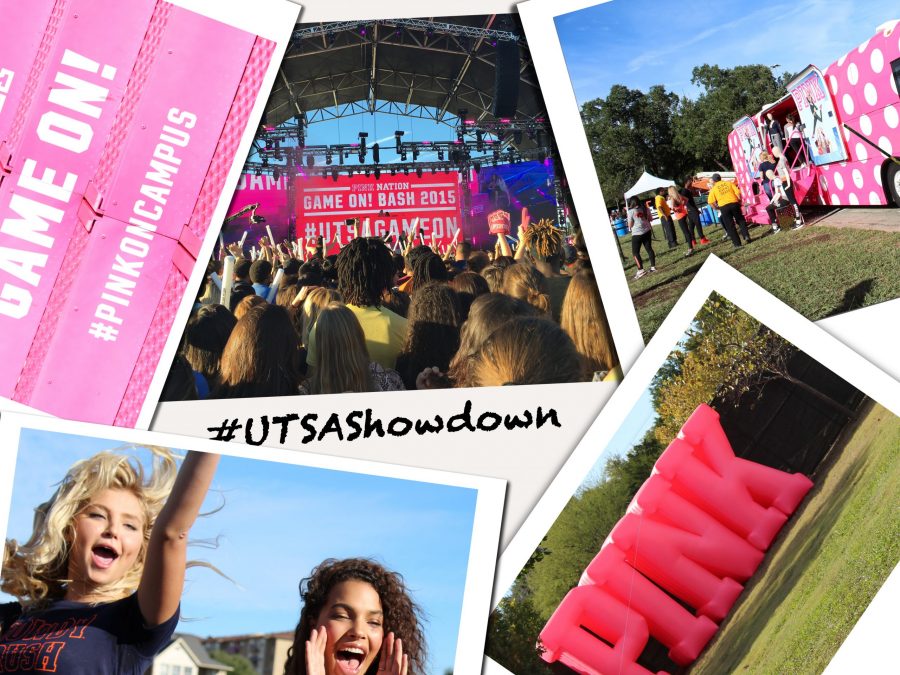 If you haven’t heard, UTSA students will turn out, tweet and tap when a free concert is at stake. Last year, Runners danced, sang and partied in the bright lights at the Zedd concert that they won from the PINK Campus Showdown – and they’re hoping to do it all again.

The PINK Campus Showdown is an annual event that takes place just after classes have begun in the fall semester and involves many colleges and universities nationwide, all vying for a campus party hosted by Victoria’s Secret PINK. This year, 98 universities are participating in an eight-day tapping competition in the hopes of winning one big panty party. To start playing, Roadrunners must download the PINK Nation app onto their smartphones and then participate in several competitions via social media accounts like Instagram, Twitter and Snapchat.

It started with a “Tap Takeover” as the qualifying challenge from the 25 to the 27. (This sentence is confusing; I’m not sure what it means. UTSA was in 25th place? Please clarify).

Then followed Round one with the 25 schools that qualified had to “tweet to compete”. Participants tweeted using #PINKCampuShowdown and their university’s hashtag; the campus with the most tweets moved on to the final.

#UTSAShowndown  took the gold in this round and became a championship qualifier.

Next was the “Likes FTW” Instagram challenge. Competitors had to follow @pinkcampusshowdown and “like” the picture that featuring their school. UTSA ‘s post had 200 votes within the first two mintues. With 15 hours left, Runners were behind Virginia Tech and Boston University.  (update tomorrow!)

The next round “Snap Spirit” requires campus showdown fanatics to take a screenshot of their school’s logo on the VSPINK Snapchat account. The school with the most screenshots will win the round.

Finally, the Final Championship or “Gram Finale” entails the top four schools creating an Instagram video; the video with the most votes within 24 hours will be the winner.

The competition is intense – there are accusations online that UTSA has cheated (reminiscent of disgruntled LSU students in last year’s competition) and rumors that UTSA can’t win two consecutive Pink Parties.

PINK was founded in 2002 as a product line in Victoria’s Secret, targeted toward 13-22 year old young women. In 2008 the Pink Collegiate Collection was launched and there began the campus showdowns. In 2010, sales reached one billion dollars, proving this competition marketing campaign was successful.  In 2011, PINK partnered with the NFL and MLB to create apparel featuring team logos and names.

In 2009, Indiana University won the Campus Showdown and Cobra Starship and Girl Talk to performed at the PINK party.

When the University of West Virginia won in 2010, party-goers saw Drake and P!nk.

UTSA has qualified for the final round and is in it to win it (again). Videos full of school colors, pride, spirit and LOTS of PINK merch will soon flood students’ Instagram feeds.