Body shaming is out! Body positivity is in! 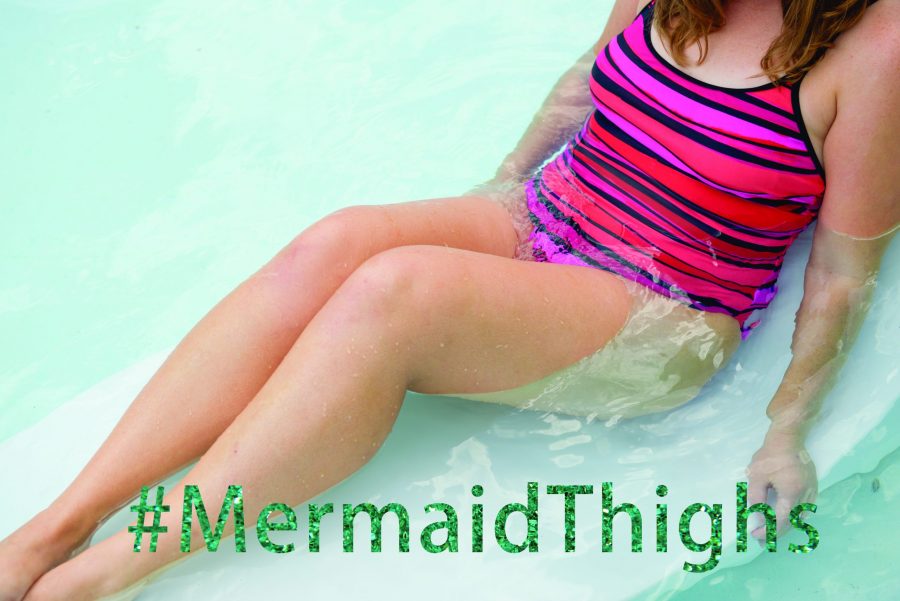 Body shaming on social media is a nasty current and ongoing topic.

Lucky for us, we caught a nice and refreshing break with a new body-positivity movement that is taking things under the sea.

In 2013 people were so obsessed with thigh gaps that someone created a whole Twitter page dedicated to actress and model Cara Delevingne’s #thighgap.

Nowadays, #mermaidthighs is the hashtag that puts shame on body shaming.

This hashtag is all about people embracing thighs that touch as the reason they are one step closer to becoming a mermaid—and there is nothing cooler than that!

Body positivity waves are embraced by celebrities like Iskra Lawrence, an Aerie model who proudly showed her curves surrounded by junk food; Lena Dunham, creator and star of Girls, is going to war against the use of Photoshop to edit women’s bodies to suit societal expectations and conform to the modeling industry’s bias by creating her own au natural lingerie campaign along with Jemima Kirke; and Ashley Graham, the model who is taking the fashion industry by storm by being the first plus-size model to appear on the cover of Sports Illustrated.

These women are fighting against negative body comments in the most gracious ways: by being fabulous and confident in their own skin.

This summer, we got a chance to see a place full of proud, beautiful women at the second annual Golden Confidence Pool Party hosted by blogger Essie Golden, who has partnered with Lane Bryant, Ashley Stewart and Macy’s among others.

“I think that it is a great thing because, a lot of times when we grew up, we saw skinny girls in magazines.

And it is not that they were the problem, but we thought that if you are not skinny, you are not beautiful,” UTSA student Carolina Cruz said.

“When I was younger, I went through an anorexia phase, and it took me a while to learn to love myself. This movement gives younger girls the confidence to say that they are beautiful no matter how their bodies are.”

One thing to keep in mind about these movements is that we must be careful to not go to extremes.

“It is not about bashing thinner girls, because they can have body issues as well,” Mayte Arredondo, another UTSA student, commented. “I think (it) is good to embrace your body as long as we are promoting self-love. Embrace yourself, but don’t shame anyone else.”

The #mermaidthighs is an integral part of the movement that is all about celebrating those sexy curves.

More importantly, this movement is about celebrating bodies of all shapes and sizes. It doesn’t matter if you are tall, short, skinny, curvylicious or somewhere in the middle; we are ALL beautiful.