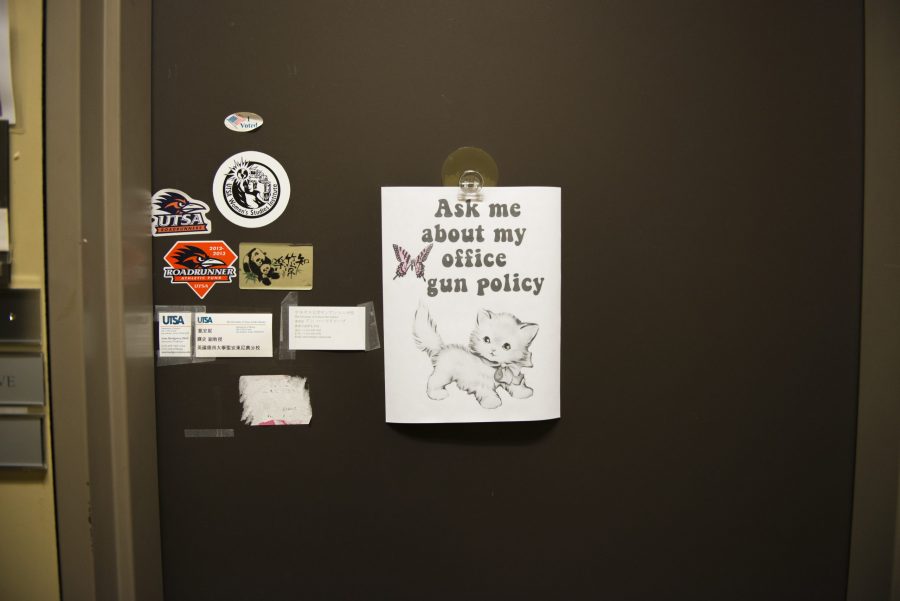 One such exclusion zone is “[any] faculty or staff office not generally open to the public that are solely occupied by a single occupant,” states UTSA campus carry policy, “and [if] the occupant chooses to designate the office as an exclusion zone.”

“I don’t think it’s a big deal if [faculty] exclude their office or not,” stated junior transfer student Abigail Hernandez. “Because their office is a more personal area, so if they feel uncomfortable about it, they should have the right to say if they want to allow [concealed handguns] in their office or not.”

In Fall 2015, a task force appointed by President Ricardo Romo, comprised of three current students, one student who has since graduated and 13 UTSA faculty, staff and administrators, “develop[ed] recommendations to implement campus carry at UTSA,” according to the utsa.edu Campus Carry Homepage.

“I have mixed feelings about campus carry at UTSA. On the one hand, I believe that the second amendment should be upheld until it is officially repealed… However, because there are so many [exclusion] zones on campus… [the] law as it stands now will make it very difficult for students to actually carry firearms on campus if they so choose,” he continued.

According to political science professor, Dr. Walter Wilson, “SB 11 is bad for education and bad for UTSA. It is likely to have a chilling effect on free speech in class and, according to surveys I have conducted, makes many students and faculty feel unsafe on campus,” he stated

Additionally, UTSA policy requires that when an office is declared to be an exclusionary zone “the occupant will make reasonable arrangements to meet [people who may be license holders] in another location [besides the occupant’s office],” but this too is contested.

“I for one will hold office hours in my office,” declared Wilson, “and will not be making any special arrangements to meet at locations other than my office in order to accommodate [license] holders.”