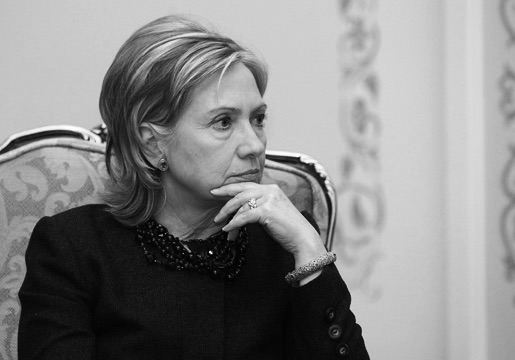 “Hillary Clinton, the big photo ” by tvol is licensed under CC BY 2.0

“I really do have great empathy for what Mrs. Clinton is going through, because the hill that she has to climb on — appearance — it’s just a different hill than men have to climb,” said former Republican representative Michele Bachmann in an interview on the radio show, “Candidate Confidential.”

Bachmann’s statement is telling, regardless of party affiliation. Focusing on superficial traits remains a reality for many women who choose to run for office. Recognizing that gender expectations are still a hurdle for women provides the opportunity to see the current election in a different, but significant, light. The unfair standards and treatment of women that exist in politics have resulted in various effects and outcomes for the 2016 presidential election.

When discussing Hillary Clinton with folks my age, many are unaware of what specific policies she’s proposed. There is minimal discussion in the media over her actual policy positions while more coverage continues to be produced covering her “likability” and “composure.” Rather than analyzing Clinton’s “College Compact” (which makes community college tuition free, helps students graduate debt free and allows existing student loan debt to be significantly refinanced), the dialogue has centered on her appearance. This has been a historical practice of reducing female candidacies altogether.

Gender-based stereotypes have long been a part of politics. The presidency itself is a gendered institution, with male dominance and unique standards being the litmus test for holding office. These influences have permeated our mindsets to the point that they’ve translated to institutionalization. Research shows that female candidates are expected to behave similarly to their male opponents when running for that same office. There is a dangerous irony when we as voters have the expectation that women need to show a level of “toughness” or masculinity but punish them at the same time when they attempt to reflect such traits.

Many messages pundits and reporters are putting out are laced with sexist undertones that go beyond ideological spin. While reporting has modernized, the same negative peddling of unfair gender expectations continues to reappear.

For example, the ancient criticism that Hillary is “shrill, bitter and cold” is still floating around. While attempting to maintain a perception of strength on typically “male issues” like foreign policy and warmth on domestic issues, Clinton’s appearance seemed unavoidable. Days before the New Hampshire democratic primary, Hillary traveled the area giving speeches in the hopes of turning out voters.  In their daily news cycles, several reporters hurled criticisms toward Clinton for coming off as “shrill,” “loud, flat and harassing to the ear,” and having a “decidedly grating pitch and punishing tone.”

It is pretty much agreed upon that Bernie Sanders’ — her competitor in the 2016 Democratic primary — default campaign style of speaking is very boisterous and loud. But when Clinton projects her voice, pundits claim they are taken aback. Even the night of her victory speech — after making history as the first woman to clinch the nomination of a major political party to be the president — Fox News host Howard Kurtz tweeted, “Hillary having a big night in the primaries. So she’s shouting angrily in her victory speech. Supporters loving it. What’s she mad at?” It seems giving assertive speeches is reserved for male politicians only.

For years now, the majority of pundits, anchors and journalists covering presidential elections have been overwhelmingly male. According to a study conducted by Women’s Media Center in 2013, three-quarters of pundits were men. This matters because there is empirical evidence showing that reporting differs based on the gender of the reporter. Male reporters are more likely to focus on a candidate’s masculine traits and issues traditionally associated with executive offices.

While some analysis has shown that many voters seek foreign policy knowledge and leadership in a presidential candidate, this is not always a beneficial trait accessible to female candidates. This trait has resulted in mixed views of Clinton, some suggesting she is too “tough” and “hawkish.” Many attributed her 2008 loss with her Iraq War vote. Her inability to balance femininity and masculinity for the public may result in another campaign failure.

If the desire of the Clinton campaign is to have the public discourse around policy, she is facing an uphill battle. Since Clinton’s campaign has tried to emphasize issues unique to women such as pay equity and paid maternity leave, it can be concluded that the media may be ineffective in propelling her campaign’s goal.

Women’s issues have been traditionally difficult to run a campaign on. Issues typically associated with women in the context of caregivers, such as healthcare and education, are termed “latent issues.” But it is for that reason women are more likely than men to support increased spending in those areas. So it makes sense that women (more so than men) are showing favorability for Clinton because her campaign speeches focus directly on universal pre-K, paid leave and raising the minimum wage.

While opinions remain positive among prominent Democrats and party officials, the campaign may continue to struggle if they’re unable to fill the enthusiasm gap as the youth vote did for Obama in 2008. The U.S. electorate may not be ready for a female president, regardless of her résumé and the  progressive Democratic Party platform behind her. There are many subtle and, at times, overt displays of sexism. The effect of these acts continues to relegate women to a lesser status when they step into the political arena. With Clinton’s candidacy, one of the highest glass ceilings may be broken, but it is apparent that women will gain many scars to do so.