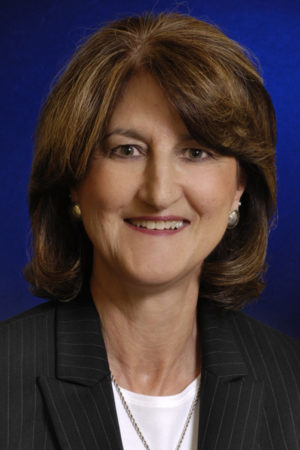 In being named the fourth athletics director in UTSA history, Hickey assumed the lead athletics role at one of the youngest NCAA Division I universities in the country (UTSA began athletics competition in 1981). She’s the only female Division I athletic director who oversees both men’s and women’s sports in Texas.

Q: What was your reaction to Chancellor McRaven’s memorandum urging Athletic Directors within the UT system to encourage student athletes to stand during the national anthem?

We had received the same type of direction last year. So this was just reinforcement of his philosophy in that the System would appreciate each of the teams representing their university and the System as a whole. So this was not something that was new. I personally think it’s an outstanding note and recommendation. So beginning last year, we had worked with all of our teams on how to line up and when to be on the court for our national anthem. In some of our sports, the students aren’t there when the national anthem plays. In some of our sports we try to keep them there, according to what kind of game situation it is. Like in the Dome, the football team isn’t even out there when the band is playing the national anthem.In basketball and I believe volleyball in the Convocation Center, we have an opportunity to keep the students on the court.You go to some gyms, in previous times, a lot of teams would go to the dressing room while the national anthem was being played, and they’d come back out for five more minutes of warm-up. So we changed our routine, especially for basketball, to make sure the kids are out there, and this was also something that was asked of us by the Conference about a year ago, to have the teams on the floor for the national anthem.

Q: So you were given direction about athletes standing during the national anthem before Colin Kaepernick decided to take a knee this season?

Yeah, this was just backing up what had been requested a year ago. But I think what has happened with the pro-football player brought (it) into the forefront again. It was just a second request on being mindful about how we present ourselves.

Q: How can student athletes balance the responsibility to represent UTSA with freedom of expression if they feel compelled to take a knee like Kaepernick did? If a UTSA player decided to take a knee rather than standing during the national anthem, would they face repercussions? How would you address that as UTSA’s Athletic Director?

Yes, we would address it. We would have a conversation. Although I totally respect what our Chancellor has suggested, we also know we have the responsibility to recognize everyone’s freedom of expression. So there wouldn’t be any kind of penalties or repercussions, but it would be something that we’d need to have a discussion about to see how we were going to handle it. Typically, not very many students are going to respond in this manner, so we want to make sure that the other students are comfortable. So we would just have a discussion on what’s the most appropriate way to let them have their show of their expression of their freedom and try to come up with a comfortable way to handle it so that it handles everybody that’s involved comfortably.

Q: Is there anything else that you’d like Paisano readers to know about your position on this matter?
As I’ve listened to more and more of the media, I think that everyone needs to understand that for most of us what the flag represents is not that this is a perfect country. It’s not that everything here is right and that there aren’t some unfair things that happen, but that flag represents all the people who have died for us to have this opportunity to have freedom. Thank goodness we live in a country where you can actually have a debate and you can express your- self, and that was because people put their lives on the line, and I think that we’re unique in that we’re Military U.S.A. city, and if you’ve ever been out to visit the Wounded Warriors (sites), or if you’ve ever been out to any of the military bases and you see the sacrifices that our soldiers have made… in my mind, it would be pretty easy to stand up and salute the flag because it’s based on that, not anything that may have happened to you personally in civilian life or politically what’s going on. This is addressing the fact that we live in a great country where we have freedoms, and that has occurred because our fellow citizens have died for us. And in my mind, that’s why you salute the flag.