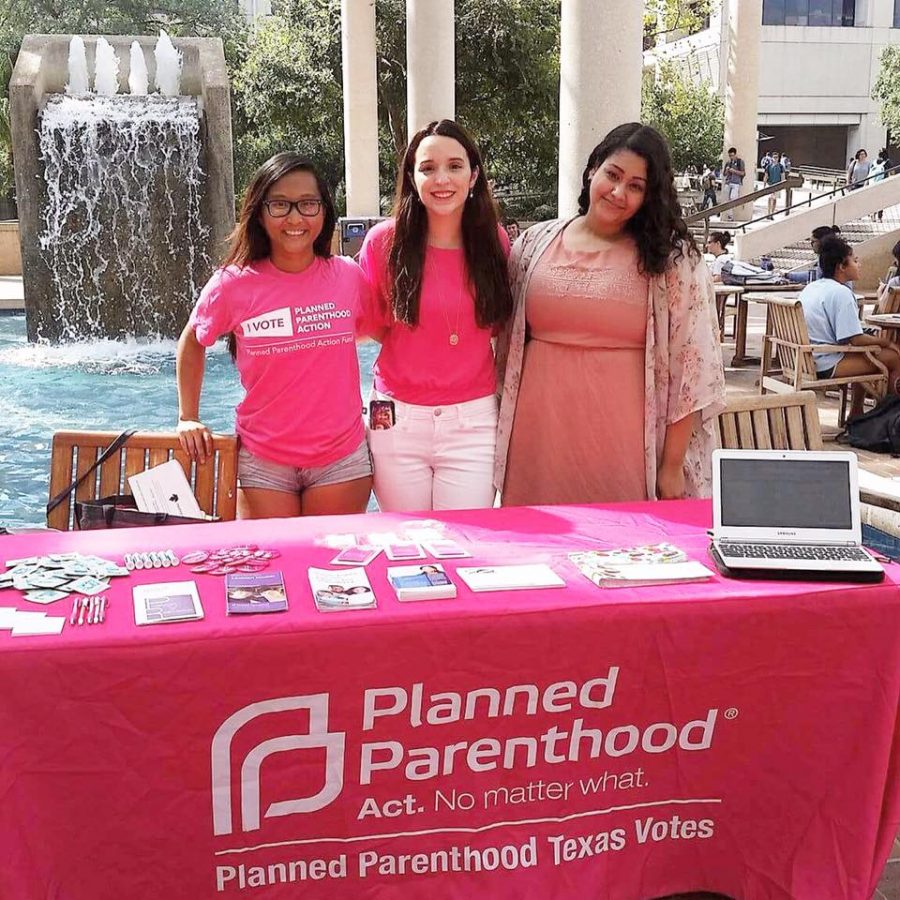 “That’s what got me involved—I went to the San Antonio Convention,” said Kat Incle, administrative chairperson and co-founder of SUPP. “I met so many influential people and I realized that most of them are kind of in the same age group as me…seeing other people in their 20’s who are just so dedicated, even though we’re so busy, that we’re still able to come together and make something happen. That’s really powerful.”

SUPP was established on campus in March of this year and their first meeting for the Fall semester was held at the beginning of this month.

As of yet, SUPP hasn’t faced any physical harassment; however, Marielle Gaspar, the membership and recruitment chair, said that at the Pink Out day event, a passerby told a member of SUPP to “have fun killing babies.”

But despite a few verbal altercations, the majority of their feedback is positive and supportive.

Incle said a student from one of the pro-life groups on campus asked why she is pro-choice.

Abortion is privately funded, not by tax dollars.” She stated that tax dollars go toward cancer screenings, STD tests, birth control, counseling and many other important services. “People aren’t protesting against us yet.”

Main topics of discussion at meetings are the organization’s objetives which include  community services and seeking volunteers for their escort program.

“In October, anti-choice groups will protest outside of abortion clinics for an event called 40 Days of Life where they stand in front of the clinic from 7 a.m. in the morning to 7  p.m., and it’s constant protesting,” said Gaspar. “There are women who want to get into the clinic without getting harassed. That’s what we’re trying to prepare for.”

Additionally, SUPP is campaigning with the Green Society on a campaign called “Toss Out Tampons.”

Gaspar added that nearly 16 billion tons of cotton menstrual products are thrown out each year. SUPP plans to hold a raffle for people to win either a menstrual cup or reusable pads, but only if they show proof that they registered to vote.

They are building a coalition with the campus organizations Texas Rising and Rowdy Vote to ensure that people interested in the pro-choice movement turn out to vote.

“If we teach from the base level—if we’re able to go to high schools and have them learn sex ed that isn’t abstinence only—then maybe they’re more likely to use contraception like birth control and condoms…they would be able to prevent unwanted pregnancies,” said Incle. “And if they do have an unplanned pregnancy, they have options. It’s Planned Parenthood, you can be a parent! We can help you build a family.”

“Even if you’re opposed, we’re open for discussion. We want to hear why you’re opposed and we want you to hear why we’re for it,” said Incle. “And it’s a really sensitive topic but it’s something we should all be able to talk about…If you have something that you disagree with, you should have a reason why and explain it logically so we can all talk…It’s okay to disagree.”

Although they don’t have a permanent meeting space, they meet biweekly at 4:30 p.m. on Thursdays. Meeting places are announced in advance via social media. SUPP also tables every Wednesday from 10 a.m. – 1 p.m. on campus.