Romo wasn’t built in a day 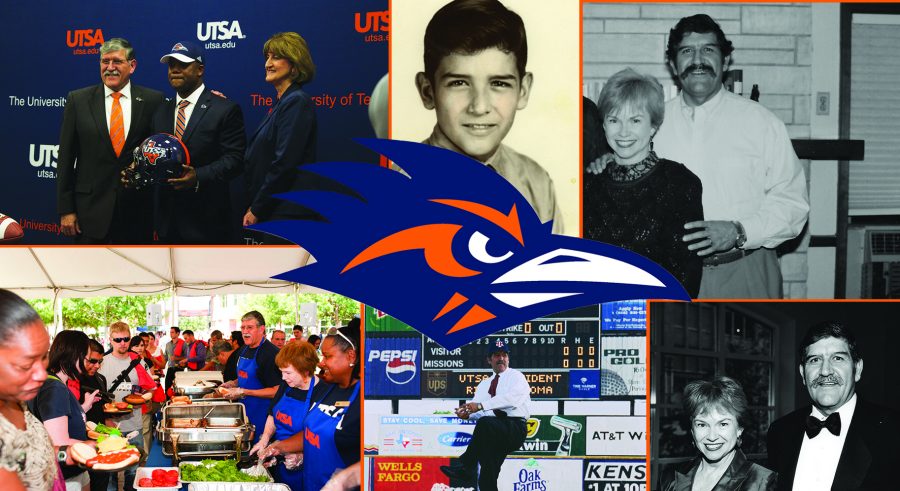 Long before UTSA President Ricardo Romo’s era with the Roadrunners began, he was taking exchange trips to Chile and making waves running track alongside world-record holder Jim Ryun as a UT undergrad in the 60s. It was in these salad days that Harriett and Ricardo Romo met and fell in love.

“There are no differences in Romo the young man and Romo the older man,” said Harriett Romo, UTSA sociology professor and wife of retiring University President Ricardo Romo. “He was a leader then, fun to be with, well-liked by all, always thinking of helping others, smart, outgoing and hardworking! I admired and loved him then, and I admire and love him now.”

The couple plans to celebrate their 50th wedding anniversary on July 1, 2017, shortly before President Romo will officially step down from his long-held post at UTSA.

As the university’s president since 1999, Romo has presided over an 18-year process growth and transformation at UTSA.

These quantum leaps include the growth of the university’s endowment fund from $20.6 million to $130 million, the transition from having no on-campus housing to owning three UTSA owned residence halls that serve 4,000 students, the expansion of international exchange programs from six in 1999 to 82 in 2016, the increase of student organizations from 140 to 360, the initiation of a football team and a $58.3 million increase in external research and project awards, among other accomplishments.

But before setting in motion these institutional watermarks,  Ricardo was a young man struck by a case of romantic serendipity.  Harriet tells the story.

“Ricardo and I met as undergraduate students in the fall of our junior year at UT Austin interviewing to participate in a student exchange program to Chile,” said Harriett Romo. “He got to go and I was an alternate. When the Chilean students returned to UT, I hosted two of the young women in my dorm room for the semester.

“I took them to the Catholic Student Center, and Ricardo was there with some of the other exchange students from Chile. We agreed to go to the picnic together for the Chileans that afternoon and had a wonderful time talking, singing and dancing to Latino music, and we continued dating from then on.

“To make up for not getting to go to Chile, I signed up to teach for a year in Nicaragua,” she continued. “Ricardo was going to run track in California. During that year, we corresponded. I saw him on the screen at the movies in Managua, Nicaragua when he helped Jim Ryun break the world record in the mile run. He wrote and asked me to marry him in July 1967.”

The two hit it off thanks to shared interests. Both of them academically inclined, one a sociologist, the other a social historian.
“We both love mentoring students, teaching, reading, traveling to museums and learning from one another,” said Harriett Romo.
As a couple, both held faculty positions at UT Austin. Ricardo taught history classes focused on the urban history of the U.S. Southwest and civil rights and served as Vice Provost for a time as well. Harriett was a tenured professor in the College of Education teaching the social and cultural foundations of learning.

“[Ricardo] grew up on the Westside of San Antonio and realized the importance of having a top tier 4-year public university in this city,” said Harriet. “My only condition when he was offered the UTSA job was that I could continue my work as a professor and researcher.”

And she’s done that. She currently serves as a faculty member of the UTSA Sociology Department and director of the UTSA Mexico Center and the Child and Adolescent Policy Research Institute. Although Ricardo is retiring, she won’t be. Instead, she’ll continue to coordinate activities on several new, large grants from her faculty and director positions.

After an 18-year bond with UTSA, Ricardo Romo’s retirement announcement has prompted several members of the local community to reflect on his contributions. District 8 councilperson Ron Nirenberg, who represents the UTSA area at city council, emphasized how strong a leader Romo has been.

“He’s not gone yet, and we’re gonna make sure we take advantage of every waking hour he has remaining,” said Nirenberg.

During his years as UTSA president, Romo has become a treasure in the San Antonio community.

“He is, bar none, a visionary and compassionate leader within our higher education community, and the fact that UTSA isn’t just talking about achieving tier one status, but actually has a glide path that we can support and see to its conclusion is a credit to his administration,” said Nirenberg. “We will sorely miss him and his leadership, and he leaves extremely large shoes to fill.”

“When one of our Student Government leaders found out that Dr. Romo planned on retiring within the year, she lamented over the realization that he would not be the one to shake her hand upon her graduation. She said, ‘he was supposed to be the one that was going to hand me my diploma; he is my president and my leader,’” he said.

While UTSA works to find someone to pass the baton to, the members of  SGA now feel they have a special obligation.

“It is now on us, as the UTSA community, to carry forward Dr. Romo’s vision for our university. He gave us a level of excellence as well as a top tier goal to achieve, and now we take it as our own to continue his legacy,” Hubbard said.

“Ricardo Romo has dedicated his life to education — from Texas to California and back again — but there is no place where his commitment is more evident than at UTSA. As a beloved, native son of San Antonio, President Romo has transformed UTSA to a thriving destination university with nationally ranked academic programs, a blossoming football program and a growing reputation across the country,” he said.

Mayor Ivy Taylor has also noted the magnitude of Romo’s work at UTSA and his vision for the campus. She compliments that UTSA has raised $200 million through a new capital campaign and the university’s annual $1 billion contribution to the local San Antonio economy.

“It’s absolutely critical that the economic development, business and research communities be involved in the search and recruitment process to the greatest extent possible so that we can continue but build upon the momentum that Dr. Romo has helped create,” said Taylor.

The significance of Romo’s impact has inspired this outpour of praise. Romo will take a one year sabbatical after retiring, then plans to take a position at the Institute of Texan Cultures. “I am extremely proud of his accomplishments as president of UTSA. He has worked hard to lead UTSA toward Tier One status, has worked with his team of faculty, staff and students to make remarkable changes at UTSA,” said Harriett Romo. The UT System will begin a national search for the next president.