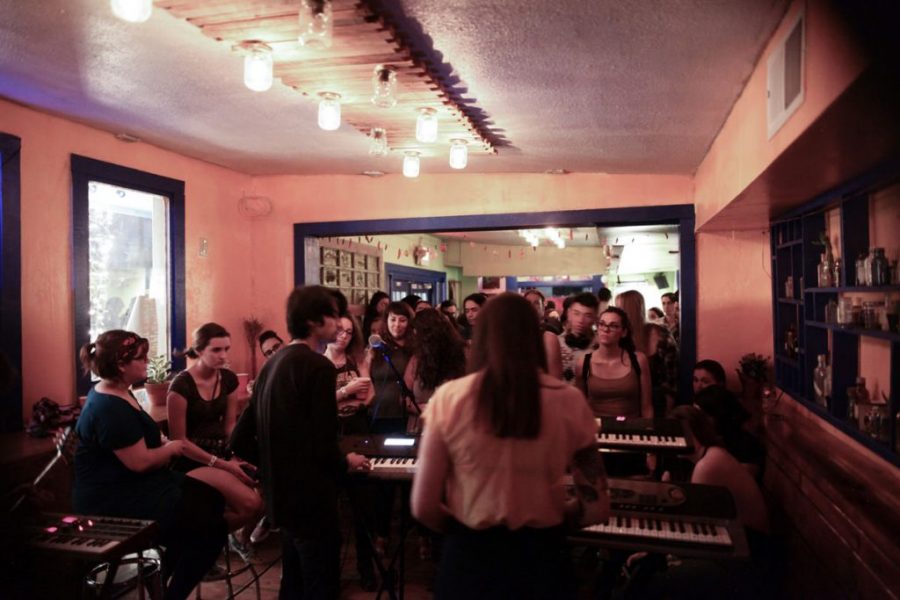 San Antonio is a rapidly growing city with a developing music scene with hundreds of musicians spanning multiple genres and several venues. Music comes in and out of this city every day. Some of the biggest acts in the world tour in our city, and yet some are uninformed of what San Antonio has to offer.

This column will be about previewing and reviewing local music events, whether they be massive concerts at the AT&T center, or small venues with up-and-coming artists. The goal of this column will be a guide to help you find some of the most exciting events in San Antonio.  Our local music scene is a bustling source of talented artists and there is no better way to be introduced to that culture than the fourth annual San Antonio Music Showcase presented by the San Antonio Current. Consisting entirely of local acts, this event is a platform that highlights some of the best local acts in San Antonio.

With 12 venues participating along the St. Mary’s strip, each focusing on different types of genres—from jazz to punk or psychedelia to hip hop—audiences will have a wide selection of local music to choose from with over 60 different local artists playing at the event.  Some of the venues that are participating in the event are The Amp Room, which will play Americana and country; Faust Tavern, with Garage and Psychedelic Rock; Hi-Tones, with Metal and Hardcode; Limelight, with Indie and Alternative; The Phantom Room with Hip Hop and R&B; and The Mix, which will have multiple genres, along with many others!

Over the last few years, this event has acted as an award show for the best musicians in San Antonio, formerly known as “The San Antonio Music Awards.” After the show, audience members can go to their website at sanantoniomusicshowcase.com and vote for their favorite artists in categories such as best new band, best vocalist, best band of a genre, best new song, best album and many other categories.

Young Costello is an 8-piece Progressive Ska band playing at High Wire Arts at the event who recently relocated to San Antonio from Austin. John Michael Leija, the vocalist and lead guitarist of the band, expressed how San Antonio has embraced their band and allowed their band to grow. “Even in our days as an Austin band, San Antonio has always treated us incredibly well,” said Leija. “Austin is great, but in the end it was the SA local scene that was the deciding factor in our relocation. The scene here is full of so many amazing musicians and to be recognized like this (is) both exciting and humbling.”

If San Antonio music culture is to grow, it needs to be embraced and recognized. As Leija went on to say, “events like this are essential to the well-being of the local music scene simply because they are a huge reminder that this scene is alive and well and that there is a tremendous amount of talent here in SA. In a society dominated by the mainstream, it’s easy to overlook all of the hard work that the local musicians put in every day.”

Young Costello recently had some major lineup changes, writing of a new album to be released early next year and their recent relocation, the showcase will be an essential part of showing the San Antonio music scene who they are.

“We’ve spent a ton of time writing this album and redefining ourselves as a band so we’re looking to make this the beginning of a new era of YC,” Leija said. “We feel this showcase will help us get to that point because it’s our first time playing an all-local SA showcase since our relocation, so it’s almost as if we’re being re-released into the wild and being officially rebranded as a San Antonio band.”

Briana Magnon, the lead vocalist of the all-girl dreampunk band “Topo Chica” that will be playing at Faust Tavern during the event, expressed how events like the showcase affect musicians such as herself.

“We’re just very humbled, and happy that people like what we’re doing. We love playing music, and being recognized by the San Antonio music scene has been great,” said Magnon.

Topo Chica hopes to record and release their first EP soon, and wants to expand their audience outside San Antonio. Magnon said that “This event, along with other shows we’ve played, has been a huge help in us meeting those goals for sure. We already have a handful of shows booked outside of SA and have recording plans in the works.”

You can see Topo Chica, Young Costello and many others on Sept. 24. The event will be held on the St. Mary’s strip, all Performances are from 10 p.m.–2 a.m., and all venues participating will allow admission with the $5 all-access wristband. For any more information or how to buy tickets visit sanantoniomusicshowcase.com.