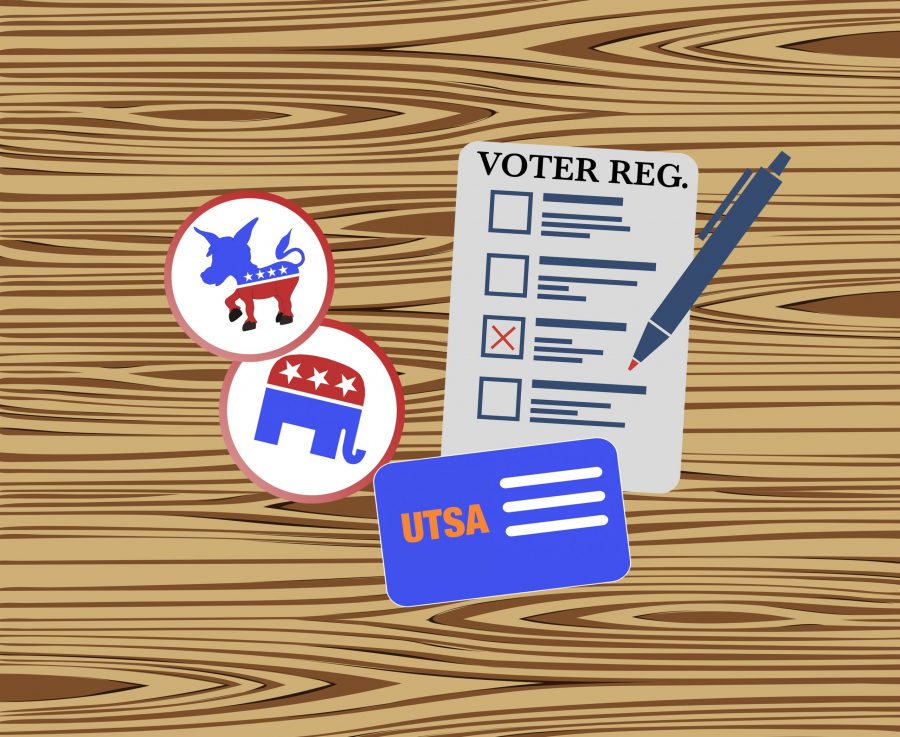 There are seven more weeks until Election Day. Despite the ever-growing election fatigue, various efforts across the state and at UTSA are striving to build a bridge between constituents and political participation.

The Rowdy Vote Coalition, a self-described “voter-participation coalition including several UTSA organizations,” will be out tabling and registering voters on National Voter Registration Day (NVRD), Tuesday Sept. 27. The holiday was established in 2012 after 6 million people did not participate in the election because of registration difficulties, confusion or misinformation about registration deadlines. Bipartisan support of the holiday has helped it gain nationwide recognition as a valuable asset for civic engagement.

The unity across partisan lines is evident in the successful efforts of Rowdy Vote to bring together organizations of differing views for the common goal of voter registration and participation on Sept. 27.

Rae Martinez is one of the founding members of Rowdy Vote and a field organizer covering San Antonio and San Marcos for the Texas Freedom Network. A liberal arts sophomore at the Alamo Colleges, Martinez represents how Rowdy Vote involves college students and like-minded young people across the city.

“We’ll have events where each organization will bring their own table supplies and table as their organization, (but) together as a coalition which is really cool,” said Martinez about Rowdy Vote. “Other times we’ll have unmarked tables, and we’ll all come together to volunteer. That’s how we’ll be doing it for Voter Registration Day.”

Martinez explained that Rowdy Vote will set up five different stations for tabling on NVRD. Those stations will be outside the Humanities Building, the Business Building, in the Sombrilla and the Paseo. Rowdy Vote will also be present on the downtown campus for voter registration. SGA Vice President Frankie Trynosky noted that shuttle stops will also have registration stations.

For now, the primary goal of Rowdy Vote is to have every student organization and club affiliated with the coalition. President of Students for the Right to Life Sean Gillen commented on his group’s participation with NVRD: “We are excited to work with and talk to absolutely anybody, as these issues affect all of us.” With regard to the impact of Rowdy Vote’s vision, Gillen stated, “I do believe that students seeing organizations of different backgrounds and different ideologies uniting to promote voter turnout will have a huge impact and get a lot more people involved.”

Martinez felt that prioritizing affiliation between all student organizations could better combat any apprehension or apathy on the part of students who may struggle with the voting process.

“An obstacle to voting might not be knowing when or where they can vote,” she said regarding challenges for student voters. This fall semester alone has provided several opportunities for young people to learn more about the voter registration process. MOVE SA recently launched their 2016 Voter Guide, and the UTSA Department of Political Science and Geography held an event titled “Voter ID Laws and the Constitution” in preparation for Constitution Day (which was Friday, Sept. 16). The event presented both sides of the debate on whether or not Texas voter ID laws are constitutional. Opponents of the law are concerned that ethnic minorities are the most disenfranchised by voter ID laws. This summer, Texas was found to be in violation of the Voting Rights Act. Currently, Texas Attorney General Ken Paxton has filed an appeal with the United States Supreme Court to argue how Texas’ voting laws do not discriminate against Hispanics and African Americans.

A temporary solution offered by the state in response to the Voting Rights Act violation is a Texas Election Identification Card (EIC). According to the Texas Department of Public Safety website, one can apply for an EIC free of charge if able to provide any documentation to verify U.S. citizenship, one’s identity, age and eligibility to vote in Texas.

Often lost in this debate is how the laws can make voting or registering to vote confusing or complicated for college students. Understanding the do’s and don’ts of voting early or on Election Day, precincts and which address to register under can be a daunting feat for young or first-time voters. While the EIC might seem like a viable solution to perceived challenges, individuals like Martinez feel it’s only a temporary fix.

“There are still hoops to jump through,” said Martinez. “It’s a little inaccessible,” particularly for students who may not have reliable forms of transportation or cannot provide the sufficient documentation.

Trynoski, a political science major, affirms that students may face some difficulty voting.

“A lot of (students) don’t know that you have to update your address if where you lived last year is not in the county you reside in,” he said. “Students who live on campus without a mailbox who are registered in their home county may face difficulties attempting to cast an absentee ballot. The Center for Civic Engagement is working with UTSA to resolve this issue; however, we still advise that if you live on campus, you get registered in Bexar County.”

Overall, this seems to be the general consensus amongst those who recognize voter ID laws as a barrier for student voters. The one month voter registration deadline is also a concern for Trynoski, who felt same-day registration or a deadline two-weeks before Election Day might appease the lifestyles and circumstances of college students.

The last day to register to vote in Texas is Oct. 11, 2016. Rowdy Vote and the SGA will both continue to register campus voters up through that date. According to Trynoski, the SGA collaborated with The San Antonio Higher Education Representative Assembly (SAHERA) to get NVRD “implemented by the SGA of every accredited higher education institution in San Antonio.” For individuals like Martinez and Trynoski, the bigger picture of their work envisions a future where campus voters become civic actors and agents of political efficacy. For Gillen, a unified goal might create a unified voice students can listen to and understand.

“I think part of the reason voter turnout is so low among our generation is that college students who aren’t heavily invested in politics associate voting and elections with rhetoric and bickering,” he said. “Hopefully that can change.”