The taco: A handheld history 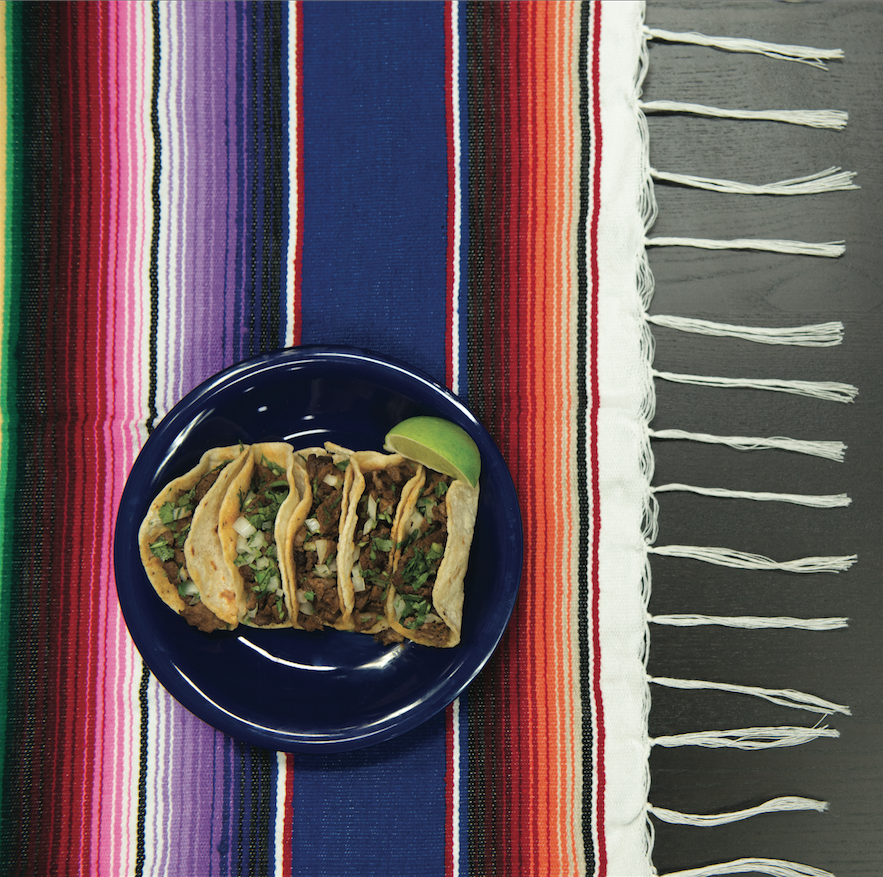 You can’t have a taco without a tortilla. The tortilla holds everything together, and is the structural indicator of a taco. One could argue that the tortilla is the actual essence of a taco. The two most popular tortillas (wheat flour and corn) envelope the early origins of what we consider Mexican cuisine. The tortilla is so integral to the identity of Mexican cuisine, that its history and relationship with Mexican food and culture transcends borders and landscapes.

But you can’t have a tortilla without the hard work of hands. Hands that belong to my grandmother, soft and worn, but strong from years of pushing down masa and building up her children. Her hands, washing over my mother’s, washing over mine, gu ide over my fingers without telling them where to dig. Our efforts overlap and collaborate; she passes everything she has worked on to me, and I will pass it on as well. Tortillas are the artistry of hands, and a testament to the corn from which masa is ground.

Today, when world-renowned Chef Johnny Hernandez isn’t dazzling President Obama with Cinco de Mayo delights or catching his own pulpo in the Mediterranean, he runs a handful of unique and successful restaurants, with La Gloria, The Fruteria, and El Machito based in his hometown of San Antonio. A lifelong fan of homemade corn tortillas, Hernandez reminisces about childhood farming attempts.

“I actually planted corn in my own backyard,” he chuckles. “I had to be about ten years old,” he recalls, vividly noting the tiresome labor entailed with trying to maintain corn crops as a child.

Hernandez remembers his father’s restaurant in the westside of San Antonio.

“It was mostly comfort food,” he says, “Mexican meat and potatoes, fried chicken.” The blending of cuisines and comfort dishes by the late Mr. Hernandez appeased the palates of all San Antonians. For his school lunch, “in a greasy brown paper bag,” Hernandez notes, he’d have a taco—usually carne guisada.

“I would trade them for peanut butter sandwiches a lot of the time,” he laughs. His tacos were typically wrapped in a flour tortilla.

While today’s up-and-coming trendy taco fare brings the spotlight back to the corn tortilla, Hernandez notes that its fluffier counterpart is still a prominent staple of Mexican cuisine.

“Flour tortillas are a very traditionally northern Mexico product,” says Hernandez. The fact that flour tortilla has remained a staple in Mexican cuisine is unsurprising, given the remnants of Spanish culture, tradition, and beliefs that still influence Latin America today. An artifact of Spanish colonialism, the flour tortilla is beloved, but burdened by a complicated history.

The Institute of Texan Cultures (ITC) Lead Curatorial Researcher Dr. Sarah Gould knows a thing or two about Mexican food. She covered food customs for the “Los Tejanos” exhibit at the ITC, and she appreciates all aspects of Mexican food as authentic, not just the recent trend of street tacos. By deconstructing the dishes we most commonly consider “Mexican,” Gould depicts a cuisine that embodies assimilation and acculturation.

“Spain produced lard from pig and pork,” she explains, “and they brought olive oil with them (to the New World). Rice came to Spain from the Silk Road.” And those other elements we love in our tacos, like cumin, garlic and cilantro? They’re from the Old World too.

The Spanish conquistadors arrived in 16th century Mexico and were appalled by the veneration of corn by indigenous people. Chicomecóatl, Aztec goddess of sustenance (hence the corn) was a prominent icon in pre-Columbus beliefs. Incompatible with Catholic doctrine, Chicomecóatl, fellow gods and the power of corn were stamped out by conquistadors and missionaries who weaponized food to indoctrinate and convert Natives to Christianity.

Wheat, as Gould explains, was a significant ingredient brought over by the Spanish because it was vital for their Eucharist wafers (the Catholic sacramental bread offering during Communion). Having witnessed how the Native peoples patted maize into what was essentially flatbread, the Spanish borrowed this process and applied it to their own flour.

“Tortilla means ‘little cakes’ in Spanish,” says Gould. With so much focus on these “little cakes,” is this article simply about tortillas? Isn’t it supposed to be about tacos?

Well, you can’t have a taco without a tortilla. And you can’t have the tortillas that are so integral to Mexican cuisine without the conflict of colonialism. And while we fast-forward a few centuries to early 20th century San Antonio, we can still feel the impact of colonialism wrapped in the guise of a commoner’s meal.

According to city-stats.org, roughly 43 percent of San Antonians identify as Catholic. That figure has increased roughly 7 percent since 1920s San Antonio. Despite rapid population growth in recent years, the percentage of Catholics has maintained a similar range in conjunction with population. In the early 20th century, San Antonio was still a considerably rural city, with a downtown center that housed mostly offices. The offices housed predominantly white men who worked and looked out windows, watching the south Texas sun beat down upon brown roads and brown hands. Hands that belonged to women and men out in the markets selling handmade snacks to laborers meandering in and out of the market place.

Before the hipster-fied, trendy Farmer’s Markets of today, markets where farmers came together to sell and trade produce, supplies and other various goods were the norm. One such market location is where current iconic San Antonio restaurant, Mi Tierra, stands today. Here, Gould explains, a band of women infamously known as the “Chili Queens” would set up shop to sell tacos and other street foods to downtown patrons.

“Tacos weren’t a meal,” clarifies Gould. “They were more of a snack to hold you over.”

The word taco was originally used to describe little explosives that Mexican silver miners made from gunpowder wrapped in paper. The term was eventually passed on into food culture and what we now identify as tacos grew in popularity.

The Chili Queens and their street food were well-known and well-loved throughout late 19th and early 20th century San Antonio. Tourism came to San Antonio in 1877 with the introduction of the railroad, which brought more mouths to feed and hearts to captivate with delicious delights. While there was a genuine interest and appreciation for what the Chili Queens and other vendors served, ghosts of colonialism eventually manifested themselves in an early form of cultural appropriation. Or something Gould refers to as “food gentrification.”

According to PBS, gentrification refers to “the arrival of wealthier people in an existing urban district, a related increase in rents and property values, and changes in the district’s character and culture.”  Critics argue that gentrification and a whitewashing of Mexican food occurred in the early to mid-20th century, appeasing Anglo-Saxon palates with subdued variations of Mexican dishes. One of San Antonio’s earliest examples of food gentrification is William Gebhardt, a German immigrant who settled in south Texas and became enamored with Mexican food.

Gebhardt witnessed the magic of the Chili Queens and other Latinos/as and commercialized processed chile powder to use for cooking. As one of the early advertisements read for Gebhardt Mexican Foods Company, “The ‘Chili Queens’ may have given it the name . . . But Gebhardt gave ‘Chili’ its flavor . . . San Antonio style.” Thus the origins of the Tex-Mex food and restaurant industry began in the Alamo City.

With racial segregation’s negative influence on economic and ethnic minorities, San Antonio saw the rise of white-owned Mexican restaurants. Working-class Latinos/as were marginalized from the market plaza by imposed laws and codes that subsequently made it difficult for individuals like the Chili Queens to compete.

It wasn’t until the Cortez family (of Mi Tierra and Pico de Gallo) and Jacala Mexican Restaurant (self-promoted as the oldest Mexican-owned and operated restaurant since 1949) that the Latino/a began to reclaim a place for themselves within the cuisine their own cultures shaped.

For Gould, food gentrification is a concern, but she maintains an optimistic outlook on the future of Mexican food.

“Food is one aspect of culture,” she says. “Culture is always evolving, so food is always evolving.” Which means, sometimes a taco is not simply a taco. Today, for example, we have Korean tacos—a testament to Gould’s tasty theory of Mexican food’s malleability.

Hernandez agrees with Gould, and he hopes to highlight facets of older customs and traditions in a way that pays tribute to indigenous practices while appealing to modern clientele who crave “authenticity.”

One of Hernandez’s current projects is a corn crop about 20 miles outside of San Antonio. Returning to his curious roots and a testament to the work of hands, the crop field provides corn for all of Hernandez’s San Antonio restaurants.

“We harvest it, we silo it, we stone grind it—we deliver it to the restaurants,” he says.

With the induction of street tacos into popular cuisine, Hernandez has witnessed a curiosity from professional chefs for spices and flavors associated with Mexican food. “Chefs want to respect authenticity. They want to learn what is authentic, and then fusion begins. Mexican food is the ultimate fusion: it’s the Old World and New World.”