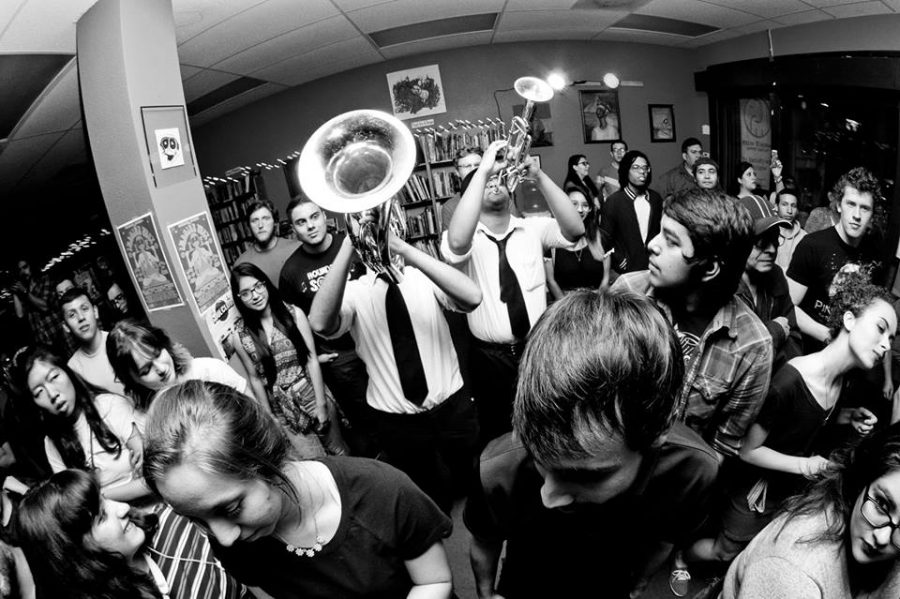 A book store by day and music venue by night, Imagine Books and Records has become a pillar in the San Antonio music community.  When it opened in October 2011, the store almost immediately began booking shows and has since been recognized as San Antonio’s Best Small Venue and Best DIY Venue by the San Antonio Music Awards.

“The Loudest Bookstore in Texas” now publishes written works, records tapes for local musicians and has its own week-long music festival, Imagine Fest. This month, Imagine Books and Records is celebrating its fifth anniversary with a three-day music event from Oct. 20 to Oct. 22 and is featuring some of the best music acts in San Antonio such as Verisimilitude, Deer Vibes, Octahedron and Alix Williams & The Golden Fleece.  In anticipation of the event, Don Hurd and his son Ezra, the event coordinator, discussed the anniversary and how Imagine became what it is today.

“I took all the things that I’ve loved to do in my past and brought them to Imagine,” said Hurd.  The store represents an amalgamation of Don Hurd’s life experiences from working in several books stores across San Antonio, managing Apple Records, creating and organizing massive music events such as his “No Concept Art” series, creating his own magazine “Windows” and performing as a poet between punk bands. But he knew that Imagine needed to be more if it was going to succeed.

“If we could somehow manage to also make the store a part of the community, then it could survive,” said Hurd.

After only a few months of operating the bookstore, Hurd organized the first show with his friends from the underground scene in December 2011. At first, the shows consisted of a mostly older crowd, but everything changed when John Stotko and Adam Koch of the band “Musicians Need Food” asked to play at the venue. Hurd believes that was the turning point of the store.

“Everything changed once the young people came,” said Hurd, as more and more of the younger generation of musicians would seek to perform at the venue.

“For a while, it was a small venue: once a month, then twice a month, then every weekend, and now it’s just nuts,” said Hurd. Don’s son, Ezra, now takes responsibility of coordinating some of the shows and has led it to becoming an award-winning venue.

“Why aren’t we counted as a regular venue? We’re a bookstore; yeah, I know, but this could be a venue too,” said Ezra. Last year, Ezra led the movement in getting people to vote for Imagine at The San Antonio Music Awards. He has become an integral part of booking bands for the show and has helped the store grow to becoming a regular venue with multiple shows in a week. The growth of the venue has culminated this year with the creation of their very own festival, Imagine Fest, a seven-day festival with seven bands performing each night.

Perhaps the most important aspect of Imagine Books and Records is that it’s family owned and operated.

“We want bands to feel welcome and that we care about them,” said Hurd. “I don’t know how many hugs we’ve given to bands when they’re done performing.”

But working with family can be difficult, and Ezra said separation of home and work “takes a lot of patience, but, for the most part, we all work well together; we get on each other’s nerves, but we love each other.”

The anniversary will celebrate this family-owned business that has become the heart of the underground music scene of San Antonio. The bands playing at the anniversary show will almost all have some connection to the store.

“Most of them are people who meant something to us, through friendship or music,” Ezra explained. Ezra has worked closely with Verisimilitude and has played saxophone at several of their shows. Alix Williams & The Golden Fleece holds a special place in Don’s heart as he’s watched Williams grow up and become the artist she is today. Other bands, like Deer Vibes, have been members of the community the family has always wanted to work with.

Imagine’s five-year anniversary will take place Thursday, Oct. 20 to Saturday, Oct. 22. All shows will start at 8 p.m. with a $7 cover charge. Imagine Books and Records is located at 8373 Culebra Road.

For more information about the lineup visit their website at imaginebooksandrecords.com.