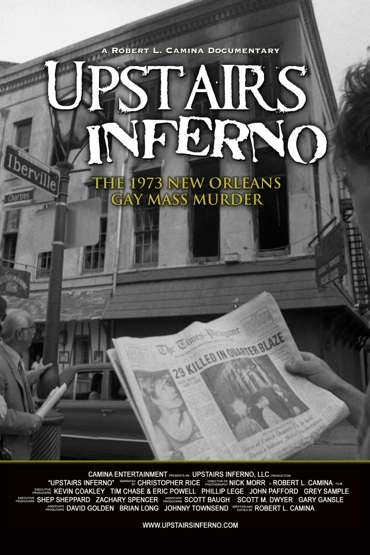 Robert L. Camina graduated from UTSA in 1997 with a B.B.A. in Marketing.

His previous film, Raid of the Rainbow Lounge (2012), screened at the inaugural San Antonio QFest in 2013. It was his first full-length documentary and, sold out to audiences, received rave reviews and created a media frenzy. The film recounts the widely publicized and controversial police raid of a Fort Worth, Texas gay bar that resulted in multiple arrests and serious injuries. The raid occurred on June 28, 2009: the 40th Anniversary of the Stonewall Inn raid.

He then began his work on a new project when he realized that few people knew about the event despite the historical significance.

“I thought I knew my Gay History. When somebody told me about this tragedy over three years ago, I was shocked!”

On June 24, 1973, an arsonist set fire to the Up Stairs Lounge, a gay bar located on the edge of the French Quarter in New Orleans, Louisiana. For 43 years, it was the deadliest single event to affect the gay community in U.S. history.

Camina was inspired to work on Upstairs Inferno because “It is as historic as the Stonewall Inn raid, but it doesn’t exist in the common LGBT history narrative. I thought that needed to change.”

The film analyzes the importance of the event from the perspectives of the victims, their families, others affected by the tragedy, the first responders and the significance to the LGBT community.

“I also wanted to humanize the story. It is easy to trivialize a situation when you gloss over a headline in the newspaper (or a Facebook post). There’s something about seeing and hearing the story from those who experienced an event that truly makes it ‘real’.”

Camina also wishes to jumpstart the critical discussion about the current state of LGBT equality in the United States.

“I believe it is crucial to acknowledge, preserve and honor our history as LGBT people. As popular attitudes shift on LGBT issues, we risk losing the stories of the struggles that got us where we are today. It is our responsibility to honor the memories of those who came before us, including those who died at the Upstairs Lounge. The people who experienced this tragedy paved the way for the freedoms enjoyed by the New Orleans LGBT community of today, as well as the overall LGBT movement. I wanted to create a film that honored their forgotten stories.”

Upstairs Inferno is a film that turns to the past to shine some light on the present.

“This is a gruesome story; there is no way around it, and, in light of this Summer’s mass shooting at Pulse, the gay nightclub in Florida, the parallels strike a painful chord,” acknowledged Camina.

“Hopefully, now, more than ever, audiences walk away from the film with a renewed call for compassion.”

Learn more about the the film (including screening dates and locations) at www.upstairsinferno.com and through the Facebook page: www.Facebook.com/upstairsinferno.