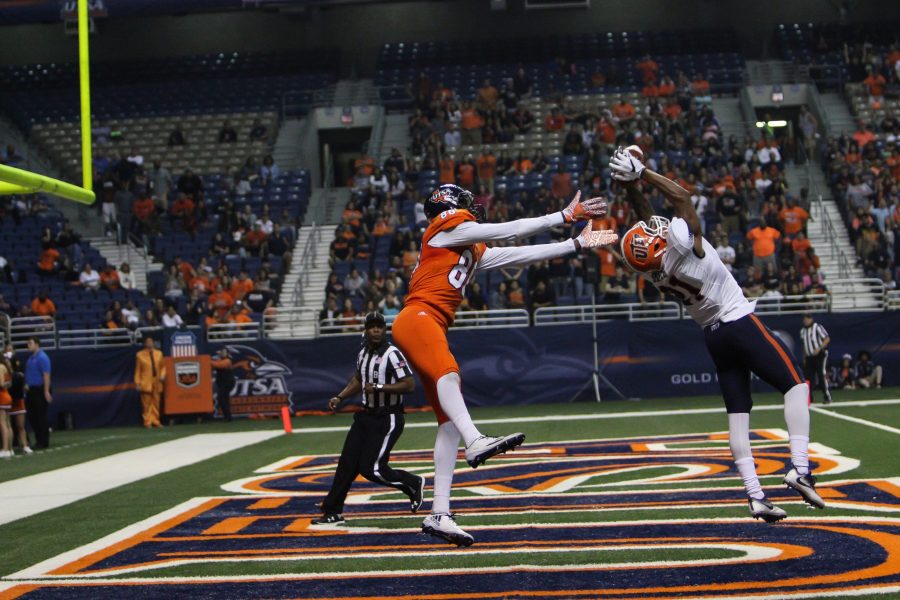 Defensive back Dashone Smith of UTEP intercepts a pass to wide reciever Josh Stewart in the second half of Saturday’s game between UTSA and UTEP at the Alamodome. UTSA lost in quintuple-overtime 52-49. David Guel, The Paisano

Saturday evening, he UTEP Miners (2-5, 1-3 C-USA) spoiled UTSA’s homecoming week with a 52-49 defeat in a game that went to five overtime periods. The Miner victory concluded Ryan Metz pass to Warren Redix was the first game to go to more than 4 overtimes in conference USA’s 21 years of existence.

UTSA led the game 28-14 at one point, but the Miners were able to fight back and extend the game past the regulation period.

Both the Roadrunners and the Miners totaled a combined 101 points and 969 total yards in a game that will be remembered as the longest football game in C-USA history.  This game was also the fifth longest game in the NCAA’s football bowl subdivision.

“It’s a tough one, it hurts. We went somewhere where we had not gone before” Wilson said on the loss. “The reality was we had opportunities within regulation. We had opportunities in the second, third and fourth overtime, and we didn’t finish. We didn’t do the things we needed to.”

Metz led the Miners with 211 passing yards and 3 touchdowns, his teammate senior running Back Aaron Jones led all rushers with 128 yards and one touchdown.

Junior quarterback Dalton Sturm once again led all players in total yardage with 297 (214 passing, 83 rushing) and 4 touchdowns. Senior running back Jarveon Williams also finished the game with 111 rushing yards and a passing touchdown on to Junior Tight End Shaq Williams in the first quarter.

“We had great drives at some points, and then at some points we just started to sputter” Said Sturm. “We have to be able to complete drives, especially on the field goals.”

Junior safety Nate Gaines once again was a leader for the defense, finishing with 9 tackles. However, he felt that his and the defense efforts were not enough in the defeat against the Miners.

“The offense played phenomenal.  However, it never should have gone to five overtimes.” Said Gaines “Collectively as a defense, we had too many blown assignments, too many missed opportunities. We could have capitalized on their mistakes and didn’t”

After a regulation period that featured long offensive drives, trick plays, penalties, an ejection on UTSA  junior center Austin Pratt and a late hit on Sturm from UTEP senior defensive end Brian Madunezim, both the Roadrunners and Miners were unable to score a single point in the fourth quarter, ending with a tie score of 28 apiece.

Before the overtime period, the Miners won the overtime toss, and elected to play defense, meaning UTSA received the ball first.

After managing just one yard, junior kicker Victor Falcon drilled a 43 yarder to go up 31-28. Needing to match the score to continue the game, UTEP’s Jay Mattox made 32 yard kick to tie the game.

In the 2nd overtime, UTEP needed only one play to score as Metz fired a 25 yard touchdown pass to Aaron Jones to up 38-31. One their drive attempt, Sturm made his own 25 yard pass to junior receiver Brady Jones, to go a 3rd overtime.

By rule: once a game goes past two overtimes, both teams must finish a touchdown with a two point conversion instead of an extra point.

Now starting the 3rd overtime, Sturm led the Roadrunners to another score. This time, 9 yard pass to Junior Kerry Thomas Jr and a successful two point conversion from Jones.

Needing 8 points, UTEP scored yet again with a 12 yard run from Walter Dawn and a conversion from Metz to Tight end Hayden Plinke.

The fourth overtime was a direct contrast from the others, as both teams failed to score. UTEP’s Aaron Jones fumbled the ball and was recovered by UTSA Defensive End Kevin Strong Jr. The Roadrunners had a chance to end the game, but were unable to capitalize as Victor Falcon missed a 42 yarder.

The final overtime ended after UTEP scored the Metz to Redix pass to counterpart Victor Falcon’s made 33 yard kick.

UTSA’s loss was hard for the team. As Coach Wilson, Sturm and Gaines showed signs of disappointment. However, all three were optimistic that the team could learn positively from it.

“It was a heavyweight fight and it went the distance.” Wilson said, “Our kids fought till the very end. I’m proud of them for their effort. We’ll be better because of going through it.”