Rocky Horror: Let’s NOT do the time warp 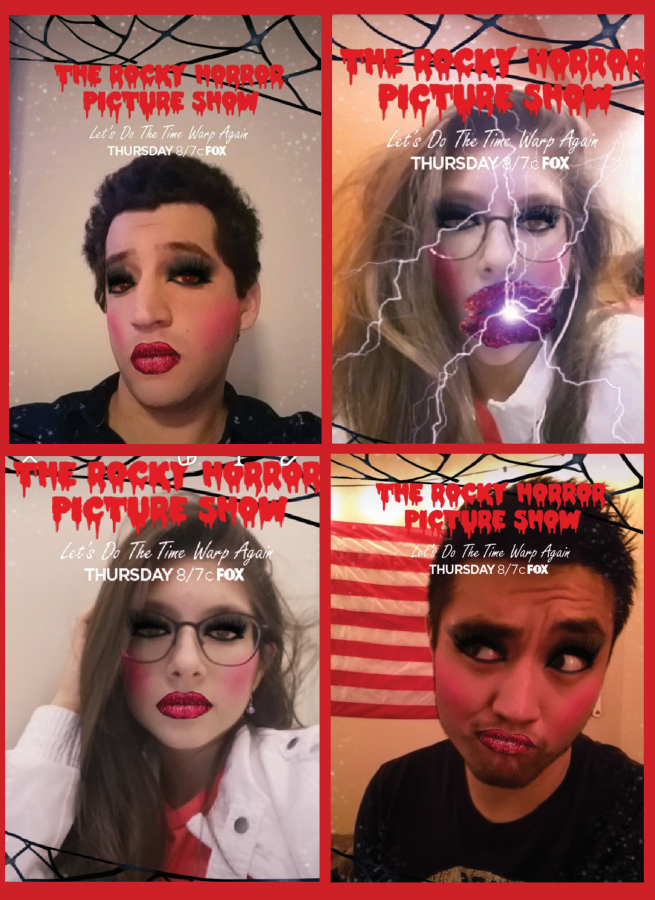 When Fox announced the remake of the beloved 1975 cult movie Rocky Horror Picture Show (RHPS) fans of the original reacted in various ways. Many, were concerned about the remake being absolutely horrible and, of course, it totally was. The attempt of a remake aired Thursday, Oct. 20 at 7 p.m. central.

When I found out about the remake, the time and channel were my first concerns. I feared the essence of the original would be lost in the midst of keeping everything family “safe” with lots of censorship. The movie was definitely toned down, and it seemed like Kenny Ortega—the director of the High School Musical trilogy and now RHPS: Let’s Do The Time Warp Again—could not leave his past behind and ruined this iconic movie.

Ortega added an unnecessary number of people to scenes and made a fake audience participate throughout the movie, similar to midnihgt shows in the 1970’s where people would dance, scream and mime some of the scenes of the movie—only in this case they were a paid cast and really did not add anything to the remake. This movie was converted into a musical/concert by adding choir girls, microphones and a band that seemed to be all over the place. This movie was filled with overcomplicated, distracting choreography, too many neon lights and cheap costumes.

There were many things I did not like about the remake. First, they completely butchered every single song, and the most painful one to hear was “Time Warp”; it was off rhythm with unnecessary added vibratofrom singers and a hideous choreography that added complicated steps to a simple routine. That was a big no-no, and made the rest of the movie a complete waste of time.

Another issue was the clothing. The costume designer did a horrible job: everything was too embellished, cheap and looked like it came straight out of a Hot Topic store. I still have no idea what kind of hat Dr. Frank-N-Furter wore when he first appeared, why Columbia wore a blue tutu and why Rocky wore gold basketball shorts instead of a speedo—not sexy.

Similar to the chaotic costumes and choreography, the set was way too clean and perfect. Instead of resembling the creepy old castle in the middle of nowhere, this looked more like a neon party at the Xavier’s school for gifted youngsters from X-men, all clean and dust free. Even when trying to match the “cleaning” parts, like in the original where Riff Raff (the faithful servant) had a reason to carry around a duster, in the remake he looked ridiculous because the castle was spotless.  That clean and organized castle took away the creepy, intruding feeling from the viewers.

A major setback to making this movie was that they tried to keep it all too pretty. Not only with the set, but with the casting as well. Everyone was way too pretty for their roles. The only person I have no complains about was Mr. Tim Curry, who did a great job as the Criminologist with an assistant, since the stroke he suffered four years ago left him in a wheelchair and with a slight speech impediment.

Victoria Justice as Janet Weiss did an okay job. Her voice saved her role, but that blue skirt suit didn’t suit her well. Cobalt blue does not represent the innocence and naiveté that she was characterized by, but that wasn’t her fault. Mr. Brad Majors was played by Ryan McCartan and that was just plain painful to watch. Reeve Carney was tall and had perfect hair, not the creepy semi bald Riff Raff we all know and love. Someone decided to take Magenta’s role too literally and dyed Christina Milian’s hair magenta, which was unnecessary and distracting.

Annaleigh Ashford played a rather good Columbia; again, there were some mishaps with the costume but overall she was good. Eddie “Meatloaf” was played by Adam Lambert and there was nothing meaty about him. His voice was magnificent, but apart from that his only scene lacked some serious acting because once again, it was turned into a concert. Rocky, Dr. Furter’s creation that was supposed to be dreamy “with blond hair and a tan” was a disappointment. His very obviously dyed blond hair (with dark roots) and over tanned skin was a total buzz kill.

Laverne Cox, although a great break for the LGBT community with the striking role as Dr. Frank-N-Furter, didn’t quite do it for me. I missed the manliness that Tim Curry gave us, with the dark make-up, crazy afro hair, his hairy armpits, boxy sexy body and the pearl necklace. Yes, Cox added some sexual flair to the role, but to be honest, seeing the “sweet transvestite from Transsexual Transylvania” with the body of a woman made it kind of hard to appreciate—It was a woman playing a man that dressed like a woman.

I would love to be able to say that there were some good parts to this movie, that I could maybe say you could survive watching it and that it may be worth your time. Unfortunately, my love and appreciation for the original cast and movie, the way this remake was produced and the way they messed with the essence of it made me want to say to you: save your time, and let’s NOT do the time warp again.