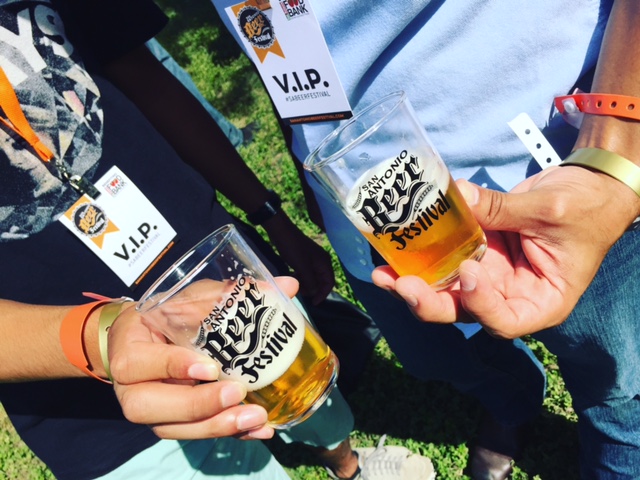 If you drove past Dignowity and Lockwood Parks this past Saturday, Oct. 15, you might have wondered what all the commotion was about. In case you missed it, the commotion was the 11th annual San Antonio Beer Festival. Whether you have never been before or just didn’t make it out, have no fear! Having never been before either, I decided to go check it out myself so I could share the details with all of you—and for the beer of course.

I was not disappointed. Put a college student in an open field filled with free swag from local vendors, live music and every kind of beer imaginable, and you’ve got yourself one magical Saturday.

With more than 400 beers on tap from 150 breweries around the world, the options were endless. But because the Texas Alcohol and Beverage Commission (TABC) does not allow “unlimited tasting” events, drinks were tallied via drinking cards that only allowed 12 samples per person.

This made the narrowing-down process a little more challenging; however, this is Beer Fest, and you better believe the event staff found a way to offer their guests a little more beer for their buck. Luckily for festival goers, it is not considered “unlimited tasting” if a fee is involved, so additional drinking cards were available for purchase at just $2.00. That is about 16 cents per sample. Not a bad price if you ask me!

Aside from all the beer, the festival also featured a wine garden. That’s right, I said wine GARDEN. Although the selection of wine was not nearly as extensive as that of the beer, it was a nice option for those who are not into sipping on lagers, ciders and ales.

In addition, Beer Fest also had three areas to listen to music: a main stage with local bands, a Latin D.J. booth and a today’s-hits D.J. booth. I made my way to all three but was sadly not wowed by the live entertainment. Maybe I just was not into the genres, which ranged from heavy metal to mellow jazz, but the D.J. booths were much more my speed. Everyone else seemed to agree, because the area that was designated for an audience remained empty for the most part.

My favorite part of the entire event was the vendors giving out free merchandise. Representatives from all over San Antonio were handing out promotional items like koozies, keychains, t-shirts and more. The San Antonio Current, Red Bull, Alamo City Comic-Con and even the San Antonio Spurs were among the many organizations present.

Although it was hot, there was no better way to cool off than being handed cute little glasses full of ice-cold beer at every turn. Despite the heat and interesting choice of live entertainment, Beer Fest 2016 was a definite hit in my book, and you can most definitely catch me at the same place, same time next year.