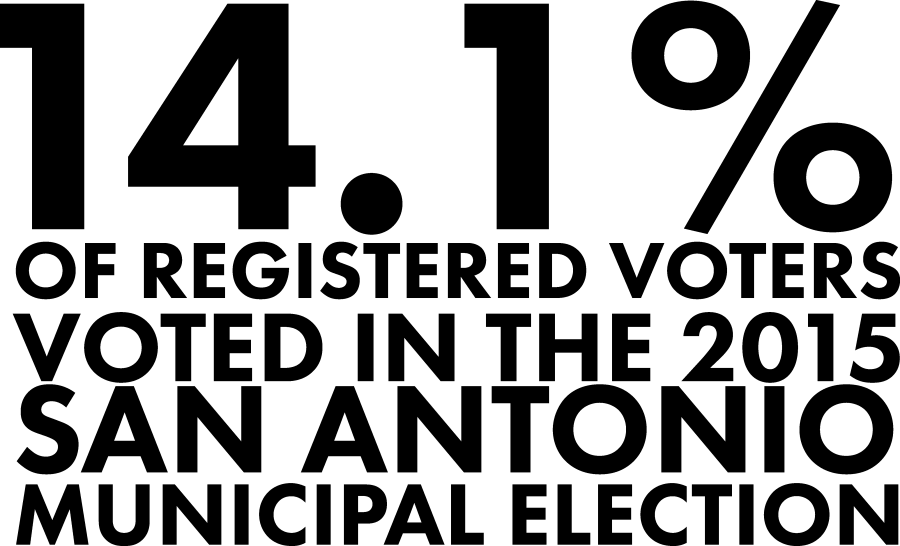 The TSS website also states that the voting rate was 55.7 percent for registered Bexar County voters in 2012 and just 31.4 percent in 2014–likely a reflection of residents’ perceived significance of presidential elections compared to mid-term elections. Furthermore, 25.5 percent of registered voters participated in early voting in 2012 compared to 19.8 percent of registered voters in 2014. Statistics show that early voting rates in Bexar County have steadily decreased since the 2004 presidential election.

According to Brian Halderman, the program director for the UTSA Center for Civic Engagement, the university participates in the National Study of Learning, Voting and Engagement conducted by the Center for Information and Research on Civic Learning and Engagement (CIRCLE) at Tufts University. The study incorporates publicly available voter engagement data with enrollment records submitted to the National Student Clearinghouse from UTSA.

UTSA participated in the study during the 2012 presidential election, the 2014 midterm election and is participating again this year. The university should receive 2016 results sometime next year. New data will provide insight into whether voter registration and voter turnout have improved since 2012 and 2014.

When asked about her motivations for voting, junior Jamie Ramirez explained that voting has always intimidated her. Despite these fears, she was concerned about the alarming and significant non-voting percentages and that influenced her to become civically engaged.

“My fear of what each candidate could do as president is greater than my fear of voting,” Ramirez stated. “I don’t want to be a part of the body that complains about the president—but never voted.”

Freshman Hunter Teirney believes that voter registration has increased in the county because this year’s presidential election is seen as one of the most important in the history of the U.S.

“My motivations for voting are to make sure that the wrong person for office does not get elected,” Teirney said.

In contrast, junior Stephanie Terranova said her concerns are economic improvement, the impact on the Supreme Court and ISIS. She believes that voting is a privilege and that voter registration has increased because of younger voters’ drive to be more politically active.

“More people have seen the direction America is going and want to change it,” Terranova said. “Newer generations care more and want to truly be heard and share their voice.”