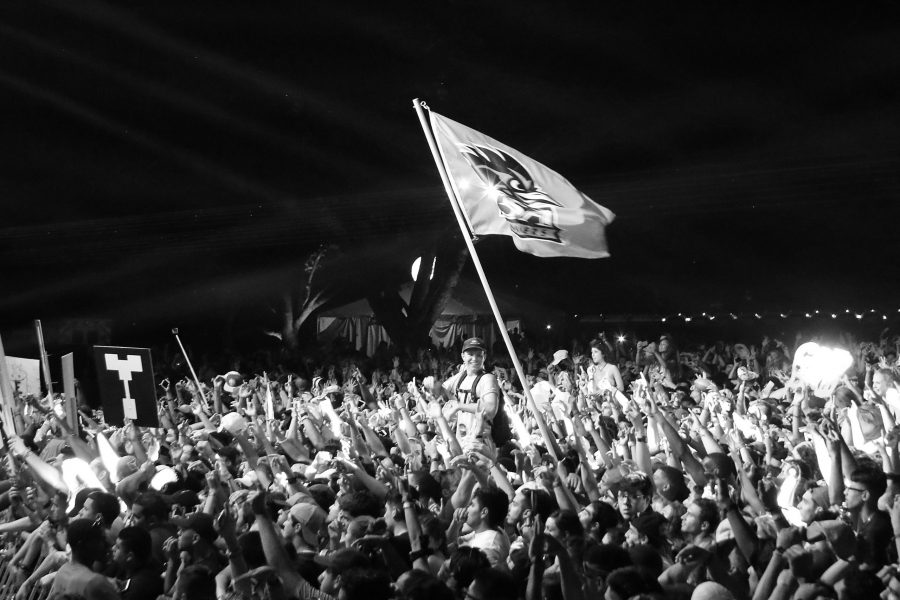 The sold-out crowd embraced Mala Luna with open arms and came in full force with a constant stream of dancing, moshing and chanting. In the spirit of Halloween, audience members dressed as superheroes and pop-culture icons such as Pikachu and Mr. Peanut. Even UTSA was represented at the festival with members of the audience waving giant Roadrunner flags and friendly UTSA alumni sharing the experience at every turn.

The festival seemed homegrown and tailormade for San Antonio, featuring several local musicians such as Greg G and VI$ION. The festival grounds were covered with cultural items from our city such as posters by local artist Cruz Ortiz, murals painted over the course of festival which looked as though they were taken straight from downtown, and a shrine dedicated to fallen artists like Tupac and Selina that looked like something you would find on the Southside.

The first day of Mala Luna was the most exciting as it had the highest intensity performances from the likes of Lil Yachty, Torey Lanez, Travis Scott and Steve Aoki.

Only a few hours after a Twitter feud and a public diss from Soulja Boy (ignited over the model India Love), Lil Yachty publicly made his clapback at to Soulja at Mala Luna. Adorned in a shirt that said “Pray 4 Soulja” on the front and “RIP 2007-2016,” Lil Yachty burned with passion on stage. He freestyled a Soulja Boy diss track that ended with him inciting the crowd to raise their middle fingers in the air to Soulja and a roar from the audience chanting “F*** Soulja Boy.”  His intensity created six different mosh pits in the crowd as he rapped  songs off of his new mixtape before ending his set by running into the crowd.

Tory Lanez entered the stage to the extremely angry rant about street life off his new album “I Told You” and immediately announced that he would be “going harder than anyone else.” His set was a roller coaster of aggression and passion as he switched from angry raps about the street to sensual R&B influenced songs about sex. Lanez would switch seamlessly between stage diving into the crowd and having the audience hold up his feet as he spat fire to dancing on stage and beckoning the audience to croon along with him.

Steve Aoki’s presence was announced by a NASA-like countdown that ended with a burst of space visuals on the stage screen. The audience couldn’t help but dance to the EDM mastermind with his fast beats and eccentric on-stage antics. Aoki would pull members of the audience on stage with him to dance, work the DJ booth and do live remixes of songs. He would do his own version of iconic songs such as Nirvana’s “Smells Like Teen Spirit” and the Friday the 13th theme song — for which he wore a Jason mask. He performed his infamous song “CAKEFACE,” which has become exclusive to his headlining event, where he throws several large cakes into the crowd.

UTSA alumni Travis Scott had the most exciting set of the night where he raged on stage to his hit song “Champions” and recent hit “Pick up the Phone.” The giant flaming visual on the screen couldn’t symbolize Scott’s energy any better as he ferociously performed. During his set, he spoke well about his time at UTSA and San Antonio and even grabbed a massive flag from the audience to wave on stage. The crowd raged with him creating massive mosh pits and a constant rain of water from thrown water bottles. Scott’s energy continued to escalate throughout his set and finally culminated in his climbing onto the spotlight tower in the middle of the audience where he performed his last two songs to his frenzied spectators.

On the second day of the festival, Jeezy gave one of the best performances of the night. Announced only a few days before Mala Luna as a replacement to Kevin Gates, who was incarcerated for battery, Jeezy did not disappoint. Jeezy encapsulated all the feelings of trap music, combining danceable beats with angry hip-hop lyrics. The crowd chanted along with him and they all raised their cell phones in the air to his performance of “My N****” and were treated to the experience of being one of the first audiences to see live performances from his new album, “Trap or Die 3,” only released a day before the festival began.

The line “it was all a dream” from G-Eazy’s song “These Things Happen” perfectly describes his set. He was the only musician to fully embrace the spirit of Halloween as he dressed like the Joker during his entire performance — complete with green hair and a suit. G-Eazy’s impeccable lyrical flow and EDM-influenced beats sent the audience into a frenzy of dance. His freestyles about San Antonio and the festival itself were perfectly integrated into his set. G-Eazy used his time on stage to make poignant political comments on the upcoming election and transition into his recent song “F*** Donald Trump.”

The success of Mala Luna’s first year can only mean the festival will grow even larger in the future. When the festival comes around next year, it will be a must-see for San Antonio music lovers.