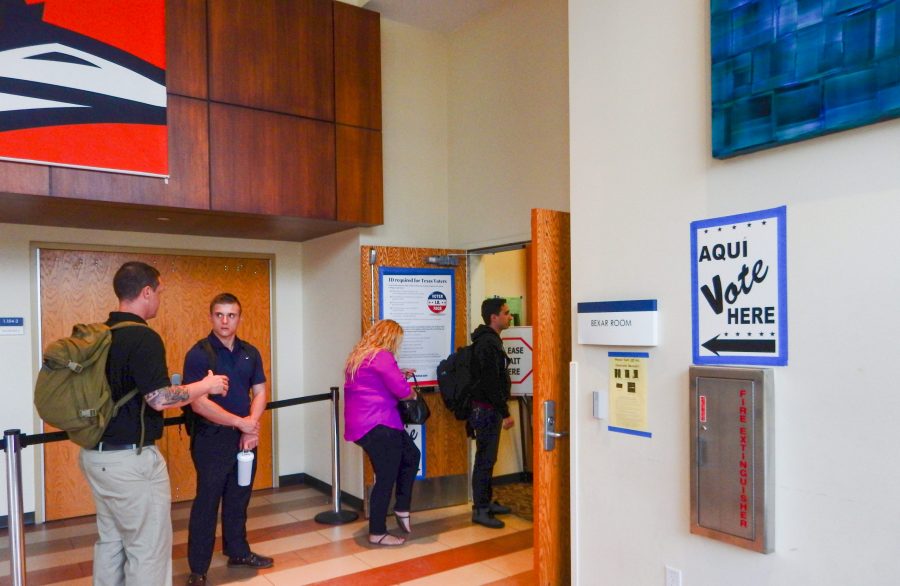 Students wait in line to cast early ballots in the Bexar Room. Isaac Serna, The Paisano

A line of students wearing Rowdy orange t-shirts filled the Bexar Room to cast their early votes for the upcoming Nov. 8th election.

Dr. Francine Romero and her foundations of civic engagement class hosted what they have described as a voting ceremony.

“It’s so neat that we’re doing the class at the same time that we’re having the election,” Romero said. “We all decided we wanted to vote as a class; we invited the councilman, and we invited Dr. Romo and also SGA President Andrew Hubbard.”

All of the invitees accepted their invitations. President Ricardo Romo, District 8 councilman Ron Nirenberg and SGA president Andrew Hubbard were among those who casted votes on campus

“We wanted to organize a ceremonial vote because, for a lot of students here, it’s their first opportunity to cast a ballot in a major election,” Nirenberg said. “It felt right to do it with them.”

The foundation of civic engagement students met their guests at the foot of the H-E-B University Center stairs. From there, they walked in procession and lined up to cast their ballots.

“This is a visualization of civic engagement in action, and I think that UTSA and the College of Public Policy should be really proud,” Drew Galloway, executive director of MOVE San Antonio and UTSA alumnus, said. “I think it symbolizes a much bigger movement around the millennial generation to get involved and to make a difference.”

“Right now we’re trying to learn about the Constitution and current events,” Diego Lopez, sophomore political science major, said. “We apply what we learn to events like this and try to make a difference.”

For SGA president Andrew Hubbard, increasing voter turnout on campus is the ultimate difference.
“We had 800 students registered to vote. That’s something that’s never happened here on this campus, and the reason is because we all came together,” Hubbard recounted.
Targeting first-time voters has been an effective strategy to boost voter turnout on college campuses.

“The student leaders of this campus remembered that we have one goal in this and that we are all going to work together to attain it, and that goal was to get as many students registered to vote,” Hubbard said. “That same effort is being transferred to get students mobilized at the polls.”

Jakelyn Valdez, a sophomore bilingual education major, casted her first vote and described the experience as enjoyable and simple.

“The staff were very helpful and friendly,” Valdez said.

Valdez was directed by UTSA’s affiliated Facebook and Instagram pages on where to vote. It was there that she discovered at which location she could cast her ballot on campus, but the student government employed other means to get out information, as well.

“We’ve been very smart at UTSA by partnering with student organizations that are passionate about getting students to the polls,” Hubbard said. “The organizations that came together were SGA, TFN, MOVE San Antonio, Green Society, Secular Student Alliance and some others.”

The city government is also trying to raise voter turnout.

“We’re using all of our communication channels to remind people that early voting is lasting two weeks and that they need to get their ballots cast by Nov. 8,” Nirenberg said. “You know, casting a vote is probably one of the most critical things we can do for our country right now, so we’re just reminding people that it’s happening this week.”