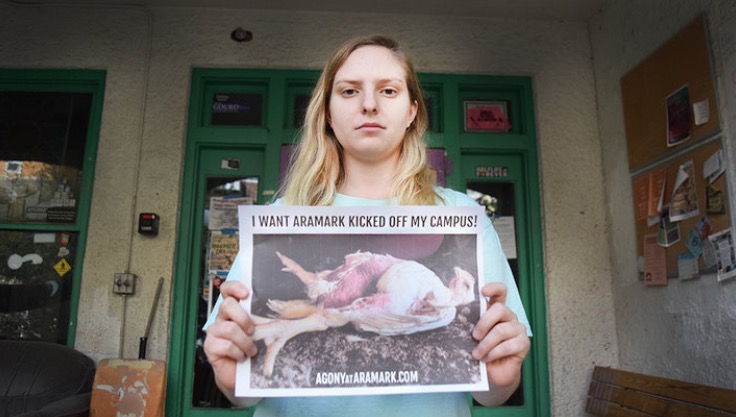 Zoey Wright, the Human League, holds a photo of a chicken bred to grow unnaturally fast. Isaac Serna, The Paisano

UTSA’s dining vendor, Aramark, is under pressure from The Humane League (THL), a nonprofit that aims to end animal suffering and adopt progressive welfare standards for the chicken they source. “Stop Abusing Chickens,” a THL petition directed at Aramark, has garnered nearly 90,000 signatures on its change.org petition.

THL is campaigning at UTSA to engage with students about humane factory conditions. Its “Agony at Aramark” campaign is active at over 50 universities.

“(Chickens) are bred to grow unnaturally fast and often suffer from painful crippling, organ failure and heart attacks,” THL stated in an open letter to Aramark.  “At the slaughterhouse, they are violently handled, painfully shocked and cut open at the throat—often while still alive and able to feel pain.”

The petition’s attached letter states that the chickens raised to be sold as meat to Aramark deserve better than “the filthy, windowless sheds they live in.” THL asks for the birds to be raised in reasonable conditions instead of “being forced to live in their own waste and toxic ammonia fumes due to lack of space.”

THL calls for an end to the current practices and suggests less cruel practices like Controlled Atmosphere Stunning, in which oxygen from the chickens’ environment is removed and slowly replaced with a nonpoisonous gas that puts the birds to sleep while they are still in their transport crates.

Aramark has managed UTSA’s dining services since 2008. The company was selected by a food service evaluation team comprised of students, faculty and staff.

Karen Cutler, Aramark’s vice president of corporate communications, assured concerned clients and customers that Aramark is committed to animal welfare. She cited their current cage-free egg policy and states the company is working with growers.

Cutler explained that just one to two percent of all the broiler chickens grown in the U.S. are raised in a manner that meets the new farming conditions.

No major food company has made a commitment due to minimal supplies available.

“We are currently figuring out how Aramark’s large purchasing volumes can be met and developing a realistic timeline for large-scale implementation. We will share our plan as quickly as possible when it is finalized.”

Whole Foods Market is the only recorded company that has pledged to implement new broiler-chicken welfare standards and move away from fast-growth breeds of chicken by 2024.

“This is a false, misleading campaign being driven by The Humane League,” Cutler said in response to the Agony at Aramark campaign. “The sole reason for the campaign is that we are working with respected groups like the Humane Society of the U.S. and Compassion in World Farming and not them.”

The two organizations have clashed in the past. In 2015, prior to Aramark’s adoption of cage-free egg policies, THL petitioned Aramark to adopt such practices. THL used grassroots organizing tactics similar to its Agony at Aramark campaign and garnered 75,000 signatures, many from students at universities.

Student coordinators, such as Zoey Wright, THL student activist at UT Austin, are leading campaigns to raise student awareness.
“The campaign is trying to get people to care by revealing alarming and upsetting facts about Aramark,” Wright said. “The startling imagery of the posters around campus will hopefully draw attention to the inhumane and atrocious practices of the industrial chicken industry.”
Wright was approached by The Humane League to be the “face” of their petition at UT.

“Along with the petition, I have been doing a lot of outreach on campus to help raise awareness and gain support from the UT student body.”

Aramark responded to the campaign by stating that they partnered with the Humane Society of the US to expand its cage-free commitment by 2020.

Aramark was awarded the Henry Spira Humane Corporate Progress Award from the Humane Society as well as the Good Egg Award by Compassion in World Farming for the adopting cage-free egg policies and following their commitment.

“Aramark is misleading their clients into thinking that they are committed to correcting this problem when, in reality, they do not have a meaningful public policy or timeline,” Aaron Ross, THL’s Campaign Director, said. “Instead they are humane-washing this important issue to students… even the testimonials from their partner organizations admit that Aramark has yet to address the issue.”

Campaigns have been effective in urging companies like Aramark to adopt humane animal welfare policies.

During Wright’s summer internship with The Humane League, she spent time pressuring other companies, including Buffalo Wild Wings, to adopt similar policies.

“The tactics of the (Buffalo Wild Wings) campaign were very similar to (Agony at Aramark),” Wright said. “We were taking photos of us handing informative leaflets to the customers who were walking into the restaurant and then sending them to their corporate offices to show what we were doing.”
These same tactics were carried out at Buffalo Wild Wings locations around the country by employees of THL. The “Agony at Aramark” campaign hopes to reach the same national popularity of the Buffalo Wild Wings campaign.

“The Aramark campaign is similar because The Humane League is also using its employees and resources around the country to work towards the goal of changing their welfare policies. It is very strategic because it magnifies the campaign on a national level and makes it so much more powerful,” Wright said.

THL succeeded when cage-free egg policies were adopted by Aramark, PepsiCo, Sodex and other large companies, but success in their next fight is entirely dependant on the demand of those who dine at Aramark.

“Animal welfare policies do drive my thought of consumption to an extent,” Audrey Castor, junior human resources management major, said. “Yes, I’m aware of the animal cruelty involved to keep up with the demand for our consumption, but it doesn’t make me not want to eat chicken at all.”

For students like Castor, awareness of animal treatment during production doesn’t imply they’ll seek other options.

“I do agree with the (THL) petition and their call to action,” Castor said. “It helps me be more aware of the production of chicken.”

“Although it may not be ethically right, I can’t say that I won’t ever eat in the cafeteria again,” Castor added.

Despite some students’ lack of concern, THL believes that on-campus efforts can make their goal achievable.

“College students have a right to know where their food comes from; they pay a lot of money to eat in the dining halls,” Zoey Wright concluded. “Hopefully, students will recognize the power of their voice because they deserve to have ethically sourced food.”