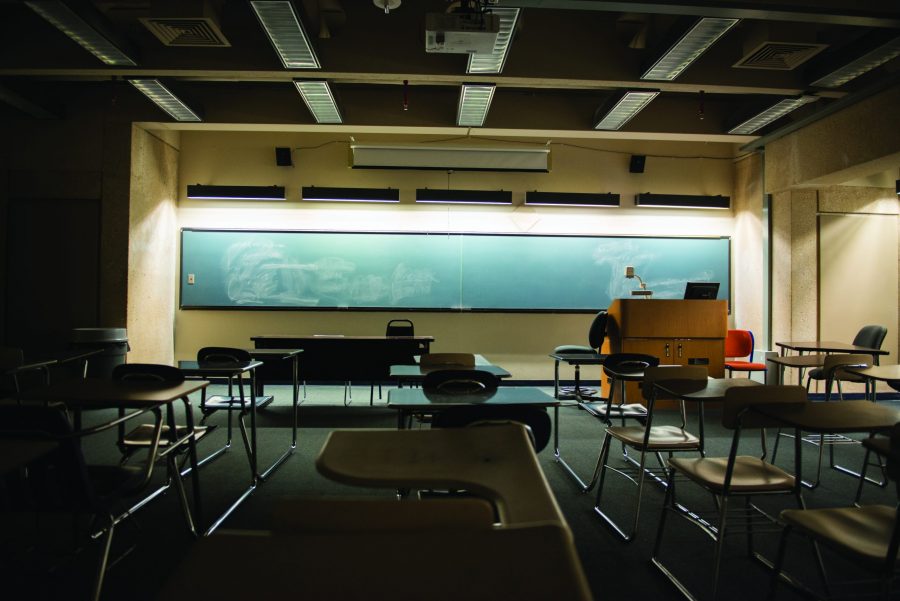 Courses were cut across COLFA’s departments, resulting in decreased pay, loss of benefits, or letting go of faculty.

This is the first installment in a series on COLFA’s budget situation.

The Faculty Senate Executive Committee (FSEC) and Faculty Senate are voting on a resolution containing recommendations for handling dramatic budget cuts within the College of Liberal and Fine Arts.

The proposal comes after COLFA non-tenure track (NTT) faculty were notified that department-wide cuts were to be made on their course loads for the spring 2017 semester.

The resolution, which came out of the Faculty Senate Executive Committee, cites a number of concerns that have risen from the budget constraints, including the loss of health care benefits for some faculty members, the possibility of successful instructors to seek full-time employment at other institutions, the undermining of research and teaching relationships between tenure/tenure-track (T/TT) and NTT faculty, and the disproportionate effect of the budget shortfall on NTT faculty.

According to a memorandum sent to COLFA faculty by COLFA Dean Daniel J. Gelo, the college incurred an overage that was, in past semesters, offset by other available sources of funding. These sources, or any other college or university funds, are no longer available.

In the memo, Dean Gelo takes full accountability for the decision to reduce courses across COLFA departments (approximately 50 percent for NTT faculty without contracts) and to suspend of six out of nine planned tenure and tenure-track faculty searches.

“No one saw it coming,” classics lecturer Dr. William Duffy said. “My department had hired several more NTT’s, both full and part-time, and a lot of them aren’t going to have classes at all.”

Duffy originally was scheduled to teach five classes for the spring 2017 semester; his course load has now been reduced to two. Duffy suffered a pay cut and his health insurance benefits went from fully paid for to only half.
“It’s exceedingly unusual to have this sort of change happen between semesters,” Duffy said. “Very few of us would’ve had the chance to apply for other jobs or make financial preparations.”
In the memorandum, Gelo stated that “no courses taught by full-time faculty, either tenure/tenure-track or non-tenure track, will be removed.”

Duffy, who is on a one-year contract with the university, believed he would not be affected by the cuts due to his full-time position.

“One of the real surprises for me was that the memo said that full-time NTT’s weren’t going to be affected. But when I went to check (if my courses were cut), I found that only full-time NTT’s on three-year contracts were not affected.

“People who think they’re in the clear now might be in for a surprise in the next week or so.”

Duffy plans to teach at other institutions next semester to offset the losses he faces from the course cuts. He warned that because other affected faculty are likely to do the same, this may impact an instructor’s dedication to students.

“Be prepared that a lot of your faculty have a lot more jobs now and might not be able to give you the time and attention you’re used to,” Duffy said. Another COLFA professor, who asked to remain anonymous, expressed similar concern.

“If faculty are forced to find other teaching jobs or other forms of employment outside of UTSA, our time is going to be spread, and we’re not going to be able to be here offering advice for graduate programs, writing letters of recommendation, or helping students with their applications for study abroad programs,” said the faculty member.

This professor, who also experienced a reduction in courses, pay, and benefits, continued, “Students come to my office to ask about their careers, about applying for graduate school–and if I’m thinking that I need to go teach this class at another college–then I’m not going to be here to do that.”

The resolution suggests the allocation of funds or a loan to offset the budget deficits for the time being until faculty can make long-term financial or employment plans. The resolution also calls for the creation of a short-term task force consisting of faculty senators who will meet with the Provost, Dean, and department chairs to discuss plans to reduce or avoid the course reductions entirely. A long-term task force consisting faculty, administrators, students, and other stakeholders within COLFA and every other college to ensure everyone is operating within budget is also proposed.

The resolution will be presented to Dean Gelo and Interim Provost C. Mauli Agrawal if it reaches a majority approval vote by at least half of the Faculty Senate.
Dean Gelo could not be reached for comment.