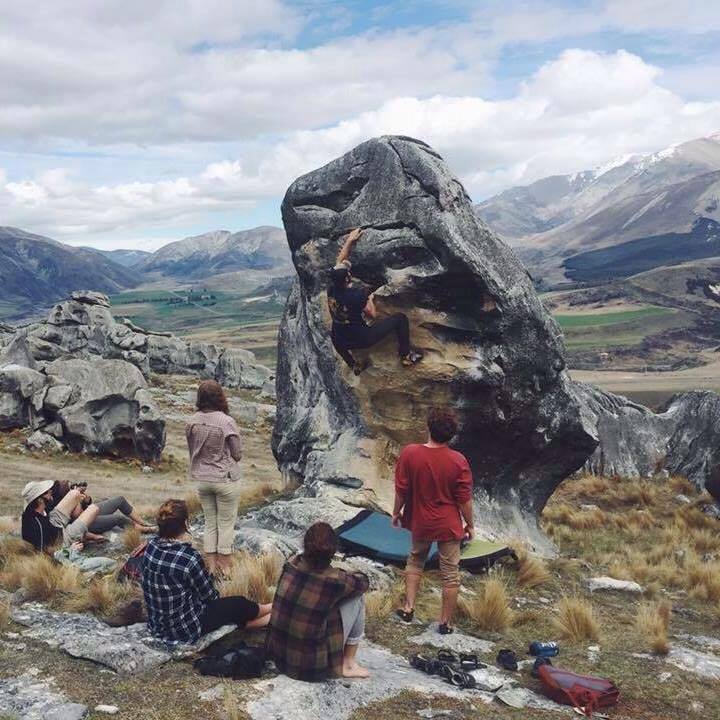 YWAM (Youth With A Mission) Oxford climbers spend a day bouldering in Castle Hill, New Zealand. Bouldering is a type of climbing without ropes or harnesses. The distance is usually short enough that a crash pad can be used to cushion the fall. Photo courtesy of David Matalon

Rock climbing invites people into nature’s greatest competition. Climbers can gaze upon the rock face and think long and carefully about how to conquer the rock. The physical and mental nature of climbing gives the climber an opportunity to move past their ordinary life and tackle something greater than themselves.

The history of rock climbing dates back to the mid 1800s when John Muir attempted a free solo climb–without any kind of harness or climbing gear–of Cathedral Park in Tuolumne Meadows, California in 1869.

Climbing culture found its roots in Yosemite, California, home of the infamous El Capitan and Half Dome.  Half-Dome and El Capitan have held the eyes of climbers for hundreds of years. A climber is considered to be among the best in the sport if they can climb these 8,000 and 3,000 foot rock faces.

Legendary climbers Warren Harding and Royal Robbins helped lead a revolution of climbers from the late 50s to the early 70s. El Capitan was deemed impossible to climb until 1958 when Warren Harding and his climbing partner Dean Caldwell ascended to the top. The climb took Harding and Caldwell 45 days to make it to the top, which included trips back down to the bottom using fixed lines. It was 1968 when Harding’s rival Royal Robbins out did him with the first solo climb of El Capitan.

The sport of climbing has evolved since then. It’s become widely popular across the world, and many climbers travel all over the world to complete the most challengin climbs.

Alex Honnold, a professional rock climber from Sacramento, California, is considered to be the best free solo climber in the world. Honnold and his climbing partner Hans Florine ascended to the top of El Capitan in under three hours.

The sport of climbing has developed its own culture. Many climbers will group together, pack up their gear—which includes harnesses, ropes, carabiners, ATCs, quickdraws, camalots—jump into the nearest van and take a drive down to their desired climbing spots. Climbers will stay out whole days or even for weekends at a time to climb different routes.

Climbing can be a social sport; but when a climber finally gets onto the rock face, the only socializing is between the climber and the rock face. The ugly rock face becomes the climber’s best friend and worst enemy.

There are different styles of climbing. Lead climbing involves a climber taking the lead with the rope by clipping themself, using quickdraws, into bolts as they ascend up the route. The climber will also have a belayer at the bottom who gives and takes rope as the climber needs it.

Lead climbing also involves more strategy and can invoke more fear in the climber. The climber must think carefully about the direction to take in order to reach the next bolt. If they attempt to make it to the next bolt but are unsuccessful, it could result in falling back to the previous bolt. These falls waste a lot of the climber’s energy and could cause injury.

Top-rope climbing is the safest and most basic style of recreational rock climbing. It’s where a rope is run through two bolts at the top of the route; this creates a pulley system where the climber is hooked up to one end and the belayer is hooked up to the other end of the rope.

Climbers, in most cases, will use a rope and a harness to protect themselves in case of a fall. However, some expert climbers, or adrenaline junkies, use only climbing shoes and a chalk bag to climb, which is considered a free-solo climb.

There is much to conquer in the sport of rock climbing. At the start of a climb, the climber chalks up their hands and then takes a good look at their competitor: the rock face. Some rock faces are greater challenges than others.

The Yosemite Decimal system, used primarily by climbers in the United States and Canada, is a rating system that measures a climbing routes difficulty. The rating system ranges from 5.0 to 5.13.

Some get gripped by fear when they realize how far they are from the ground and how hard it would be to continue up the rock. Some find themselves at a physical barrier that is difficult to push through.

A climber can only go as far as their forearms will allow them; they can continuously shake their forearms to loosen the tightness, but the moment could come when there is no more strength left to give. Many climbers are defeated by their competitor and are forced to descend back down to the bottom.

Many parks and natural areas facilitate recreational rock climbing; they have bolted routes for a climber to follow.  However, it’s often the case that a climber is left to find their own route when things get tough on the rock.

Rock climbing is nature’s past time. No sport can get someone closer to nature than rock climbing can. A climber will attempt to conquer a rock face by using cracks, caves and holes in the rock. By the end of the climbing route, the climber will know his competitor well.

As long as nature has rock faces, climbers will be there with their ropes, chalk and small doses of courage. To someone outside the sport, climbing rock may make no sense, but to climbers, climbing rock may be the only thing that does make sense.