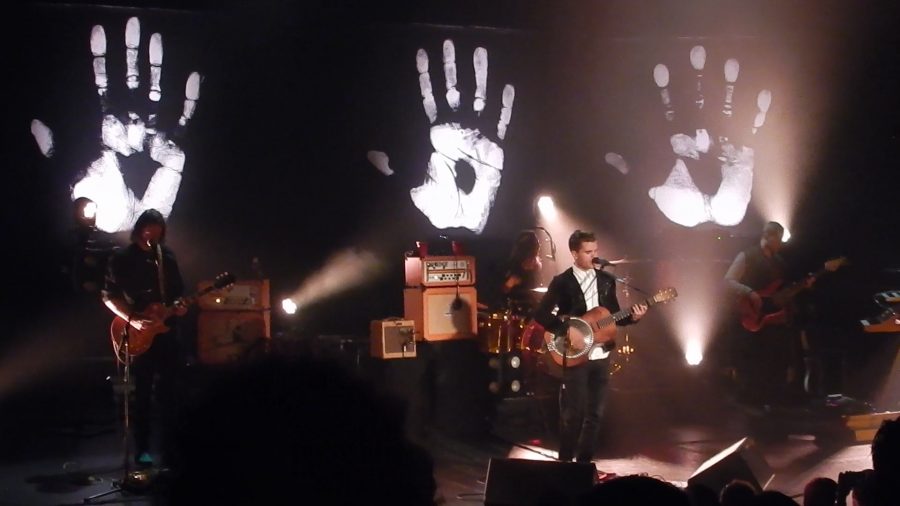 Kaleo performs amist a background of handprints to promote their Handprint Tour. Photo by Raquel E. Alonzo, The Paisano

The audience was captivated from the moment Kaleo stepped on stage to the moment they hit their encore. Kaleo’s first performance in San Antonio was a memorable one.

The first opening band was The Wind + The Wave, which had a country feel mixed in with indie roots in it’s music. They started with the song “Let’s Forget That I Was Ever Even Here,” and continued with hits such as “Love Somebody” and “Happiness is Not a Place.” Their set felt intimate, with the glowing of their marquee signs that read “W + W.” Subtle colors such as yellow and blue washed over the audience and they had an overall easy going stage presence. This band was ideal to get people in a good mood for the rest of the acts.

The second opener was Bishop Briggs, and her style is labeled as indie pop and alternative rock, but her music felt more like hip-hop mixed with indie-meets-techno. Her interesting style of music pumped up the crowd during her performance especially on her top hits her top hits “Wild Horses” and “River.” During her performance of “Hi-Low (Hollow),” her voice bellowed throughout the theater, and everyone could feel her energy. Her cool presence on stage made everyone want to sway and dance along to her upbeat, trippy music.

The Aztec Theater was only half full when the first act performed but the theater was packed by the time Kaleo came out. The massive difference between genre in all three bands was drastic, and there was an audience to match these varying styles. People from all walks of life and of all ages attended the concert. There were some people dressed in cowboy boots, others in gold chains with baggy pants and others in typical Friday night club wear.

Although Kaleo took a lot longer than the first bands to come out and play, they were worth the wait. They began their set with a romantic backlit stage and the lead singer’s sultry voice, seducing the audience from his first note. The band switched between blues, indie and rock; each song was a surprise so you’d never be bored. The four piece band from Iceland formed a dynamic sound and the lead singer’s voice mixed with the band pumped up the crowd—no jumping around on stage needed.

Kaleo played hits such as “I Can’t Go on Without You,” “Save Yourself,” “All the Pretty Girls” and “Way Down We Go.” As each song played, their energy rose higher and higher.

Their rendition of “Bang Bang (My Baby Shot Me Down)” was one most people have never heard before. There was a spotlight onstage, and the song was slower and more dragged out than usual. Everyone assumed it would be a ballad when suddenly the drummer banged his drums as the singer sang “bang bang,” making people jump out of their spell and get ready to gear up for a heavy and slow rock-n-roll completion of the song.

Throughout their concert, Kaleo had giant white handprints on black backdrops on stage to signify their Handprint Tour. While performing, various colors were reflected onto the handprints, this created the right atmosphere for each song. Although the concert was eye catching with its fancy light show, Kaleo could have done without it; their music alone was enough to send the crowd into an uproar.