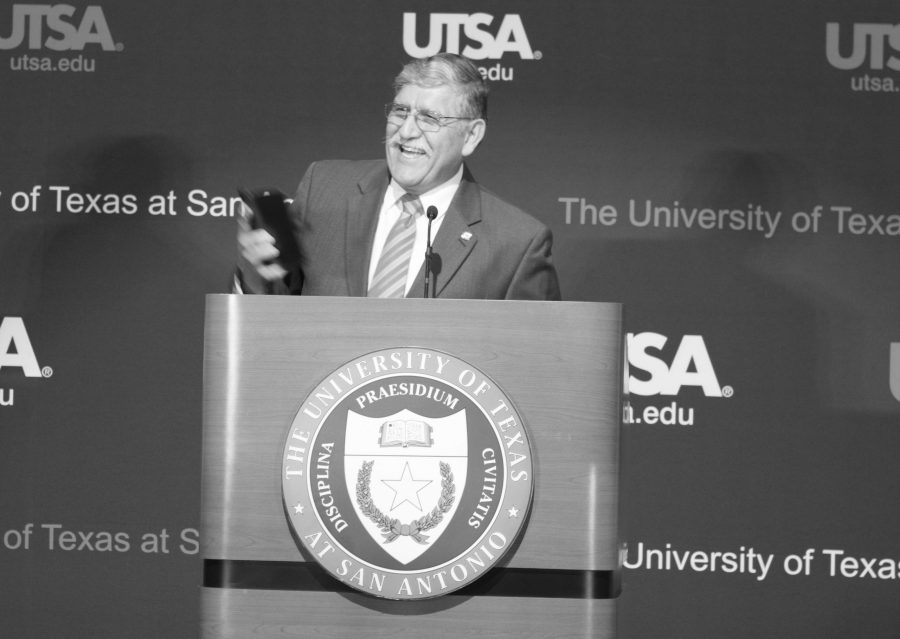 According to Romo, there are “ten essential first steps. They cut across academics, research, resources management, and brand,” highlights of the plan include the academic focus on undergraduate and graduate recruitment along with improvement on advising, counseling and mentoring; the hiring of more faculty members for research and a greater emphasis on research grants; and new sources of revenue and budgets and improved IT systems.

After explaining a few components of the plan, Romo stated, “in this initial phase, we will also focus on greater recognition and esteem for UTSA by developing a distinct brand. Whenever you say ‘UTSA’ anywhere in the world, we want people to immediately thing of excellence and innovation.”

Blueprint UTSA was developed to keep the university going forward. After asking for help on identifying the priorities of the university, students, staff and faculty were able to come up with over 60 initiatives. From those 60, five categories were created which include transformational student experience, impactful research, enriched community services, improved business processes and infrastructure and greater recognition and self esteem.

This plan is to be distributed to every staff member within the week and will be in immediate effect over the next few years.

Times are looking tough for the university as it will face constraints on budgets in the coming few years, a four percent reduction within the budget is expected. “I hope I’m wrong, but I don’t think we should expect any additional state funding over the next two years.” Romo reported with worry.

In his years as president, Romo’s administration cultivated the master’s programs from 36 to 68, and doctoral programs saw a rise from 3 to 24, student enrollment grew from 18 thousand to 25 thousand and the campus has expanded from 1.8 million square feet to 5.4 million square feet. 2005 was a major year in setting new goals and launching initiative in order to achieve excellence.

This was the year UTSA began its focus on research. Comparing himself and UTSA to Tim Duncan and the San Antonio Spurs, Romo is proud to have created a culture of teamwork and collaboration, improved the community and earned respect and admiration.

“Just like the Spurs, we have become the symbol of excellence. We are the University of the 21st century,” he said.

“Remember why we are building a Tier One institution. Our students deserve it. Our city deserves it. Everyone who has ever believed in us deserves it. And, I believe in you. For everything you have done for UTSA and our students, mil gracias! Go Runners!”