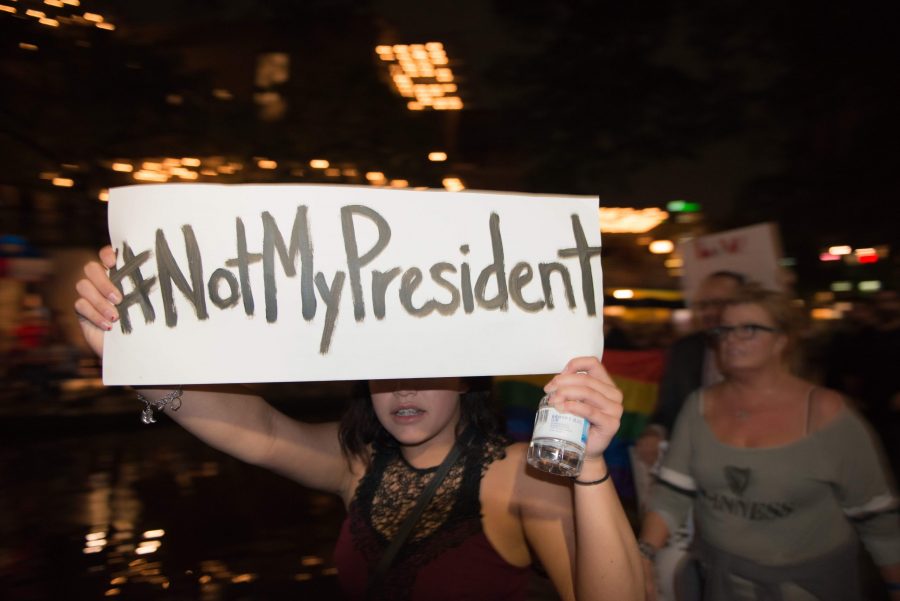 Anti-Trump protests have swept across the nation. Demonstrations have been organized in countless major cities in the U.S., including San Antonio.

A small group of UTSA students gathered in opposition to the United States President-elect, Donald J. Trump. Brandishing signs and assembled in line, the students marched through campus chanting, “not my president” and “love trumps hate.”

The procession of fifteen students marched on campus, circled the Sombrilla and moved through the JPL, on Nov. 9 at 6 p.m. The demonstration generated little attention due to the hour it took place.

“I’m impressed they’re having a Trump rally the day after the election,” Ben Medellin, graduate history student said, “It might have an effect if they keep going.”

The on-campus demonstration received mixed feedback among those on campus.

“I get (the protesters) may not be happy,” senior political science major Michael Wilkinson said. “I haven’t been happy with some of the things that have happened over the past eight years, but that’s life.”

“Well at least it shows that people care,” freshman environmental science major Kaylee Scherbeh added. “I can’t imagine any other way (the protesters) can get people to see them.”

Others contested the students’ demonstration with a shake of their head and shouting contradictions to what the students’ signs stated.

Students were heard shouting, ‘Better than having a criminal in office,’ and asking the demonstrators, ‘How is Trump a racist?’

“We’re going to get a lot of negative feedback and that’s okay.” Chloe Robinson, an undeclared freshman who helped organize the protest, said.

“It’s kind of sad to see other schools coming together to protest, but here at UTSA, even mentioning a protest we got a lot of negative feedback.” Adriana Cervantes, a sophomore communications major who also helped organize the protest, said.

UT-Austin students led an anti-Trump protest using a similar formula as the UTSA students, but on a larger scale. UT students gathered on campus on the morning of Nov. 9 and took to the streets by the afternoon.

UT’s downtown location proved advantageous; the protest generated the support of nearby Austin residents who also opposed the election results.

In San Antonio, protesters gathered at the Alamo. Waving their flags and signs, the group mobilized and marched downtown. Their call against the divisive attitudes they believe Trump provoked echoed throughout the historic site, and the city.

An estimated 600 protesters assembled at the Alamo on Nov. 11, and over 1,000 participated the following night.

“The night as a whole was a real sign of hope.” Sebastian Waddy, senior political science and economics major, said. “It’s a sign that we believe San Antonians desperately needed after being torn apart last Tuesday by the presidential election.”

“The message was loud: that the xenophobic, homophobic, racist rhetoric that has consumed America over the past several months will not be allowed to develop into American Principles.” Waddy continued, “Our principles are much stronger, unifying and accepting.”

Before the protest at the Alamo began, a couple posted on Facebook in an effort to organize a counter protest. They encouraged Trump supporters to exercise their right to open-carry at the assembly.

“There were a few Caucasian people with rifles both nights that stood about 50 feet from where we were but it didn’t intimidate us,” Cortes said.

The San Antonio protesters organized via social media and word of mouth. Aztlan Rising hosted the Facebook page but the protesters insisted it was a “community event” and not affiliated with one organization.

“I invited all of my Facebook friends to the event and the people who were running the pages did the same thing.” Alejandra Cortes, president at UTSA’s National Criminal Justice Honor Society Alpha Phi Sigma, said. “(The protest) ignited the activist in me and I was able to talk to other people who felt that we were regressing to making hate crimes acceptable and the norm.”

Cortes mass emailed members of her organization and posted flyers on-campus to get the word out.
“I joined the protest because I feel very passionate about equality for everyone that has been targeted as a result of Mr. Trump’s statements during the campaign. Not all Mexicans bring ‘drugs, crime,’ and are ‘rapists.’ To see so many people buy into Trump’s hateful political rhetoric was disappointing,” Cortes said. “I feel that it’s necessary to unite with others to let hateful people know that we will not be silenced by hate and that we won’t stop fighting until it ends.”
“You can protest all you want,” Wilkinson said, “but as soon as you become violent you’re no longer protected by the Constitution.”

The Trump protesters demonstrated peacefully and took precautions to avoid conflict. Waddy offered to be a “peacekeeper,” but despite hearing news of counter protests forming, everything remained peaceful.