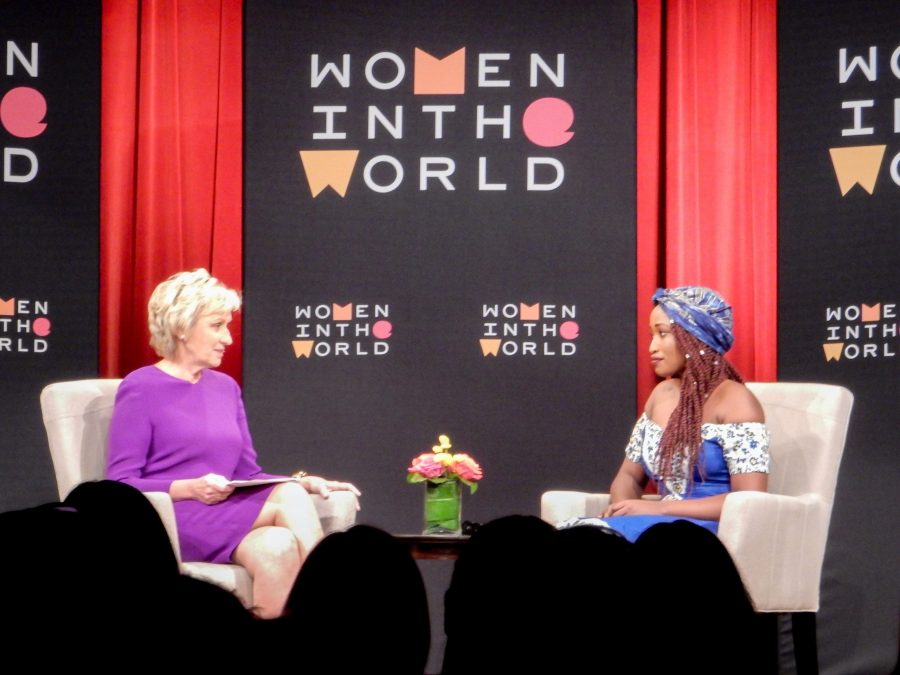 “As a female pursuing a STEM career, I began to feel a significant level of importance in the room myself,” said Elexus Liggins, a senior at Judson High School who was nominated to attend the Women in the World 2016 Conference (WITH). She plans to major in computer programming and hopes to attend UT Austin after community college. She will have 32 college credit hours completed by the time she graduates in June.

“This enriching event allows (people) to listen and visualize the journey of the amazing ladies we saw tonight,” said Liggins. “(The women) showed us a more impactful form of achievement, and that is to create a movement.”

Sheryl Sculley, city manager of San Antonio, welcomed the women—and men—in the audience to the panel who were about to speak on their struggles, stories and strife. Tina Brown, Founder and CEO of Women in the World, gave opening remarks about what exactly WITH is all about.

The first panel titled “After the Mudbath: Can We Ever Regain the High Ground?” was moderated by Bianna Golodryga, anchor at Yahoo News & Finance. esteemed women such as Lorena Chambers, CEO/Chief Strategist/Chambers Lopez Strategies; Emily Ramshaw, Editor-in-Chief of the Texas Tribune; Karine Jean-Pierre, National Spokesperson and Senior Advisor of MoveOn.org; and Jenifer Sarver, Principal/Sarver Strategies discussed the issue of misogyny and racism in the 2016 election and how America can carry onward.

“He’s a giant question mark,” said Ramshaw of President-Elect Donald Trump. “As Jenifer was saying earlier, I don’t even think he reflects the Republican Party. He’s not a Republican…the nation has elected someone who is entirely unpredictable.”

Ramshaw she stated that Trump has brought out the racism and misogyny within the electorate and pointed out that hate crimes have only begun to rise. Sarver stated that the cabinet members Trump appoints will embolden people who commit hate crimes.

The second panel named Sarah Evans, Founder of Well Aware, this year’s “Toyota Mother of Invention” and awarded a $50,000 donation to help her cause. Amy Costello, Founder and Managing Editor of Tiny Spark, joined Evans on stage and was interviewed by Darlene Dorsey, Reporter at News4/Fox 29 San Antonio. Nancy Inouye of Toyota Motor Sales awarded Evans the sizable donation.

Masih Alinejad, Iranian journalist and founder of My Stealthy Freedom spoke out on the issues of the hijab in her panel led by Bianna Golodryga. Alinejad was jailed while pregnant with her son, was forced to leave her country and live in exile. She has not seen her family in seven years.

The hijab is not just an aesthetic issue—it is an issue of women’s rights. The unveiling photos Alinejad received from women taking off their hijabs are powerful; the photos mean freedom that the women wearing them do not have. Showing hair, drinking and partying with boys can lead to lashes or jail time for Iranian women. To stand up for their rights, the women even took bikes to see the supreme leader. Alinejad was passionate about her movement and urged everyone to help out where they can.

“The Art of Survival” panel hosted speaker Sandra Uwiringiyimana, activist and author of How Dare the Sun Rise which is due for publication next year. Tina Brown interviewed Uwiringiyimana who is currently a junior university student majoring in international diplomacy in New York and a citizen of the United States. Uwiringiyimana witnessed to the slaughtering in Congo when she was ten years old.

“I felt wrong from a very young age,” said Uwiringiyimana. She was treated poorly by other students in elementary school because of the tribe she belonged to. The day her refugee camp was attacked in Rwanda was like a horror scene out of a movie; she saw dead bodies all around her. She lost family members that day including her six-year-old sister.

Uwiringiyimana arrived in Rochester, NY in winter time with her family and were unable to speak English. Taken from her home in Congo, then to the refugee camp in Rwanda, then to the U.S. took a toll on her; she did not have a chance to breathe. She would soon discover the issues surrounding black women in America. Her project includes photographs of survivors of the massacre and her book will talk more about her personal story.

Darlene Dorsey hosted Randi Gavell, retired Army Staff Sgt., and Sarah Rudder, Marine Lance Corporal during the panel “The Strong and The Brave.” Rudder pulled people from the Pentagon on Sept. 11 and in doing so shattered her leg but continued working for 24 hours. Doctors tried to save her leg for 12 years, but ended up amputating it. But this did not stop her—she started bench pressing three days after her amputation and now participates in sports.

When Gavell was deployed to Iraq, three vehicles pulled up to where she was stationed and attacked her camp site. The blast ended up injuring everyone and only three people of the fourteen were mobile. Gavell suffers from post-traumatic stress (PTS) and discussed how the “disorder” part of the illness gives it a stigma; the word disorder has driven away people who need to seek help. Both Gavell and Rudder competed in the Invictus Games in Orlando. Veterans have a history of committing suicide and the Invictus Games help veterans forget, for a few moments, the challenges they face

“I did not write about the election, that is not the chaos in this book,” she joked. Cornwell has sold over 100 million copies and has authored 29 New York Times bestsellers. She discussed how vigilant we must be in our cyber security and how she ties her job as a forensic scientist into her fiction. Cornwell claimed that she does not thrill seek, rather it is her characters that encourage her to the unconventional pastimes. She spoke about how women need to be tougher and not so sensitive, how women must be there for each other and not tear each other down. Although she has faced the fact that screenwriters and directors want to change her lead female character to a male, she has not stopped dreaming of her character hitting the big screen someday.