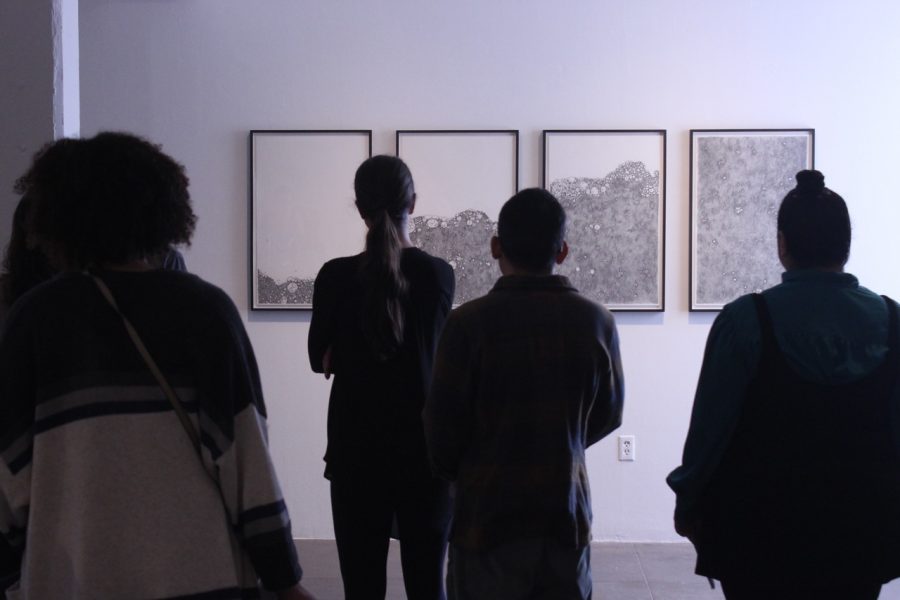 Photos by Enrique Bonilla, The Paisano

Downtown non-profit organization Artpace continues to foster the freedom to dream with the latest installment of its International Artists-In-Residence program. Guest art curator Denise Markonish consciously selected an artist from Texas, the United States and one international artist to move to San Antonio and create an exhibit. There was only one rule: create something from the heart.

Markonish wanted this year’s installment to feature and highlight fearless women, and she accomplished that goal. Through the original work of artists Kim Morgan, Lily Cox-Richard and Kim Faler, a vision was realized. Though these women all hail from three different areas, their stories find moments of intertwinement, and Markonish acts as the string of thread that makes its way through each artist’s piece.

Artist and sculptor Kim Morgan hails from Nova Scotia, Canada. She has been featured in galleries around the world such as The Cynthia Broan Gallery in NYC, St. Paul’s Gallery in New Zealand and the 2010 Vancouver Olympics. Morgan is intrigued by the representations of body through social and medical systems.

The foundation of her exhibit was to create a “universal blood type.” This  fascination for blood and the medical system began with her parent’s diagnosis of cancer; she spent a massive amount of her time in hospitals. To realize her vision, Morgan compiled a collection of blood scans from multiple diverse individuals — some who are not permitted to give blood for reasons such as ethnicity, sexual orientation and various medical conditions. She creates a wall of the scans that have been printed onto a taffeta curtain, in which the individual blood cells shown seem to be almost 3-dimensional.

The inside of the body is brought outside for everyone to see. The piece is rightfully entitled “Sigh.” Every five to seven seconds, an AC unit hidden behind the taffeta wall releases a strong gust of air and causes the entire piece to…sigh.

This very sigh is the heart of her piece. It is more than just a gust of air; it is a form of expression. Through the sighing of her piece, the blood cells appear to be moving, as if taking flight through someone’s body. The universal blood type eliminates stigma and discrimination by showing that we are all connected. Her exhibit is masterfully off-beat and distinctly different from her colleagues, making for a major talking point of the artist in residence experience.

Lily Cox-Richard comes from Houston, Texas. She has had solo exhibitions featured in the Hudson River Museum in New York, Hirschl, the Adler Modern in New York and the Vox Populi in Philadelphia. Her installation is named “Salv,” and it beckons the question of value. She has compiled three bales of compressed scraps consisting of over three tons of copper, which is an infinitely recyclable resource.

The three bales are placed strategically throughout her space. Cox-Richard wanted to create an experience that would demand attention and force people to walk around her work. The bales hold their own individual stories in pieces of disposed copper that take form in different objects.

Through months of watching trash get sorted and shredded to decrease its presence, questions of how value is determined were brought about, and the groundwork for “Salv,” was sparked. Cox-Richard has drawn attention to how material moves through our lives as we put dollar amounts on everything, marking it a scarlett letter of monetary value.

In one of her pieces, Cox-Richard creates an illusion piece based upon a 1985 trailer-truck accident in which asphalt was spilled from the tank of the trailer and spewed all over the mountain. Still, today the asphalt remains and functions not as trash or dirt but as a landmark. The things that make Cox-Richard tick are fearlessly projected through her art. Her work encompasses loaded meaning and is sure to tinker the brain.

Kim Faler is a native of Williamstown, MA. Her residence in San Antonio marks her first time in Texas. Faler joked about being surprised to have not yet seen tumbleweed. Faler likes to focus on the moment of now, the ways it is created and taken down. She would like to stop time and magnify the small moments that we sometimes take for granted.

In the heart of Faler’s creative space lies a structure of walls that bleed paint down to the floor and pots that ooze soil onto the surrounding areas. With this structure, Faler has set out to challenge functionality by creating purposeful malfunctions that are as beautiful as the functioning. A tree planted a little outside its pot, a pattern painted outside the lines of it’s stencil. Faler has showed that she is not afraid to get her hands dirty with her earthy and resourceful exhibit. She has used rocks, grapevines, branches and more to convey her message that everything holds value.

The natural pace of the ocean provides inspiration for two portraits included in the exhibit. Faler has rendered the portraits in graphite. The moment of water crashing the shore is slowed down to a halt and actualized in the paintings of grey and white matter. Even though it is not moving, the portrait creates illusion of both inward and outward breath. Faler’s creations are imaginative and vibrant. The eyes cannot help but gravitate to the bold watercolor hues she uses.

Each artist’s piece acknowledges the things we take for granted and show us how fragile life is. Each woman has connected through the act of simply caring: caring about the people, the things and the processes that are looked over. It is an exhibit for anyone and everyone to view until Dec. 10, free of charge.