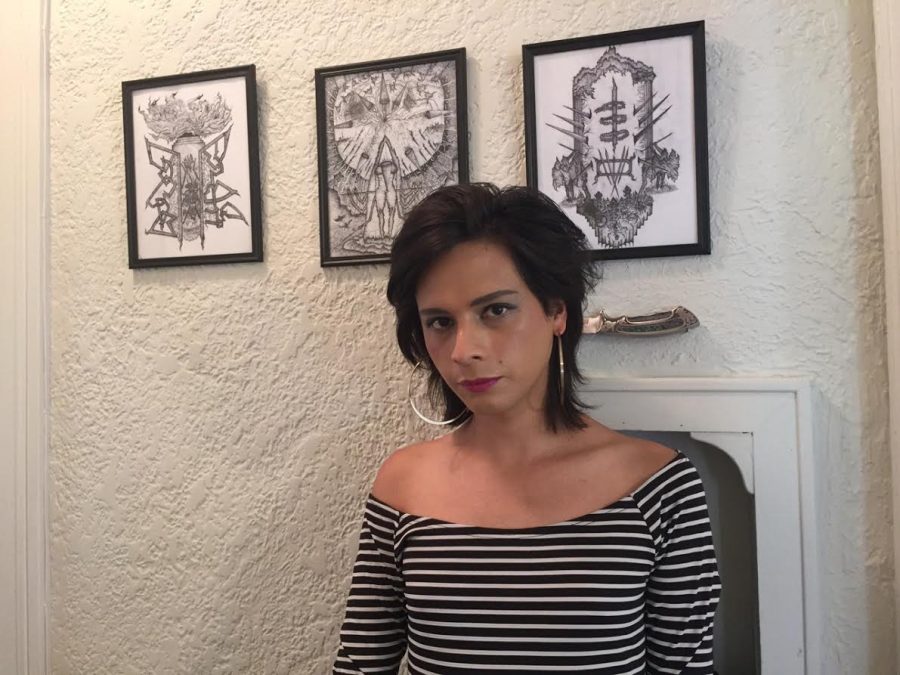 “Trans-demon baby, ”Antemia Kavillari is a visual and musical artist from San Antonio. Kavillari represents a very small number of women performing in the metal and arts community in San Antonio: an integral and vital element of the San Antonio art scene that is experiencing a shift in its perception of the human body and is challenging body normative standards – the aim is to overcome harmful body image expectations for a more inclusive society.

Her artwork is dark and brooding, filled with esoteric symbolism that better represents her identity than traditional depictions of the human body do.

Persevering through norms and ignorance, Kavillari’s art has risen to great heights over the past year. Her work has been showcased at several  local art popular San Antonio destinations like La Botanica, Brick at Blue Star and Hi-Tones. Her black metal project “Willow” will be featured on Viceland’s “Gaycation” upcoming season starring Ellen Page and produced by Spike Jonze — a series that explores LGBTQ cultures around the world.

I sat down with Kavillari to discuss her distinct dark stippled style, her experiences as a woman and the San Antonio art community.

Antemia is a forward-thinking artist who has recently been gaining visibility. And similarly, is part of a group of people who are just now gaining representation despite having been present all along. How much and what kind of  art goes unappreciated in our city? San Antonio is thriving with art, music and culture, but there seems to be a lack of substantial audiences for the creative minds churning out the work. Renovations to the Deco District and Blue Star Contemporary Art Musuem may change this in the seasons to come. Be sure to check out Antemia’s performance as “Willow” on Viceland’s upcoming season of “Gaycation.”

B: You gravitate toward darker imagery in your artwork. Could you expound on its role in your content?

K: When you look at my content a lot of my audiences have told me it has a lot of Nick Blinko and Gustav Doré influences. These are just a couple of artists who influence me on different levels. I strive to really put my reality into that filter, per se. I had just started a stippling just a year ago; I got a knack for it and had to build a lot of patience to approach that method, but it has worked out pretty well for me.

B: How does your work reflect your transition and experiences as a trans woman?

K: For me, the art was more of a manifestation of a lot of absence growing up here in San Antonio. I had to face a lot of self-hatred, and that self-hatred was toward my body and who I am. I think removing myself from a lot of people I was close to and constantly changing my apartment was my way of communicating what I was trying to do with myself to others. From a year ago when I transitioned on October 12th — I remember the exact date — and I was afraid of drawing my own body. I recently did a piece where I was drawing my own body, but instead drawing depictions of cis-gendered women — I wasn’t prepared to really put myself out there in that light — and I used a lot of esoteric symbolism to really put myself out there on that level.

B: How do you cope with transmisogyny/fetishism/sexism in extreme metal?

K: It’s more my dedication to the genre. Like many audiences in that genre can relate blindly submitting to their idols and the sonic power that metal has, where we don’t even see the ideologies connected to it. That was me falling under the whims of that genre. I had to make my own meaning with it. That’s my truth and my distance which have had to endure a lot of suppressive things throughout my life. I cope with it by depicting my own truth and living that burden that’s placed on me. I wouldn’t say my artwork is vengeful, but there’s going to come a point in time in which people are going to have to look at it and understand it. You’ll have no way to not view it politically.

B: How has the San Antonio arts community responded to your emergence as one of the few trans artists in the community?

K: “I find the people in the community I’m connected to are the most important. From doing artwork for Haunter, to connecting to other trans folks in San Antonio who tell me that I’m an inspiration — this transition has been a really positive experience. I don’t think my presence has been as visible as I want it to be; I think there’s still more work to do as a community, but it’s been a positive experience overall.”