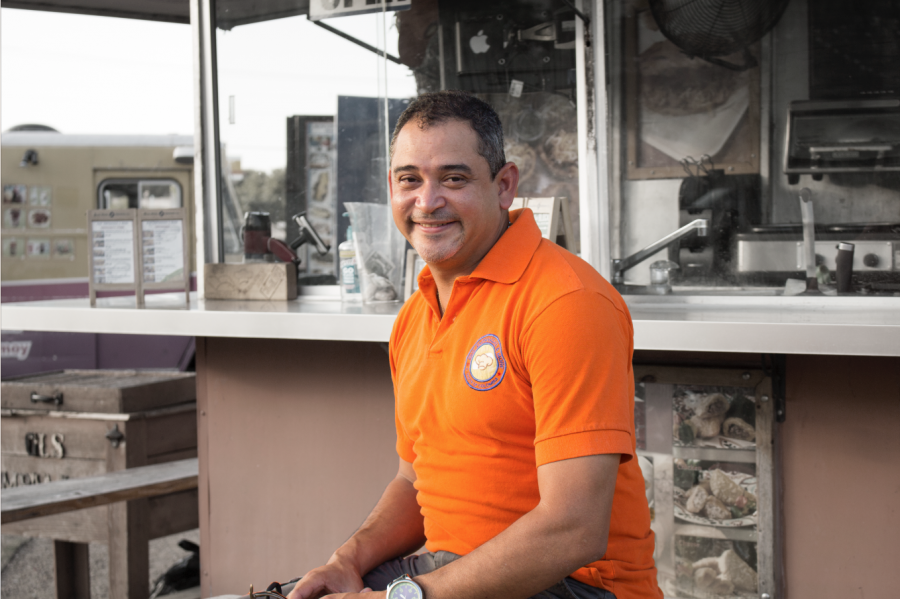 Operating out of a small truck built in his garage, Gustavo Guete—or “Gus,” the owner of Gus’ Empanadas & More—serves a variety of items including Colombian-style pizza, hot dogs and (of course) empanadas, to patrons of The Block Food Park & Patio Bar.

The Colombia-native San Antonio resident has dedicated his life to fulfilling his passion for cuisine; he considers it an art form and approaches every day accordingly. And he’s found a spot next to UTSA that he considers the perfect place to carry out his vision.

“The food represents your personality,” Guete said. “It’s not about the quantity, but the quality…you want that wow factor every time.”

Anyone hesitant to consider cooking an art form should consider Ralph Waldo Emerson’s broad definition of art: “The conscious utterance of thought, by speech or action, to any end, is art.”

Italian filmmaker Federico Fellini once asserted that “all art is autobiographical,” and that’s absolutely the case for Guete.

Gus was working 18 hours a day at three different jobs in New York when the Sept. 11 attacks occurred. His brother invited him to Texas to get away for a while, and he quickly fell in love with San Antonio’s people and culture.

He has resided in San Antonio ever since, but returns to Colombia to visit his family a few times each year. These trips remind him of the traditions passed down to him, particularly by his mother and grandmother; watching them cook and uphold family values had a profound effect on his outlook. Guete believes that maintaining his bond with Colombian culture allows him to better carry its traditions to the customers he serves daily at The Block.

“It’s very important to be engaged in your culture,” Guete said. “Part of expanding your menu is when you get creative because you have that inspiration from your country.”

Like art, food can transport people across time and space. As he considers himself an artist, Guete wants his food to have this effect.

“It’s not about the food,” Guete insisted. “It’s about the smell, the taste…it reminds you and brings you back to that home-y place that you want to be, comfortably eating something that you like.”

“I want people to feel as if they are in Colombia when enjoying my food,” Guete professed.

The environment in which Guete operates his business is beneficial in numerous ways. It can be difficult to convince people to try new foods from parts of the world they are unfamiliar with. But Guete sees The Block as an opportunity to attract customers who may not necessarily seek out Colombian food on their own, but are willing to try it when it is presented as an option.

According to Guete, one of the best things about The Block is its proximity to UTSA; he says the students have open minds about trying other cultures’ foods.

Artists compete not only internally to better represent their vision with each creation, but also with other artists for attention and recognition.

“We have to be challenging ourselves every time,” Guete proclaimed. “We cannot be in a comfort zone. To be ‘playing it safe’ is not safe. The public challenges you because they know you can do better every time.”

The competition among these particular chefs is for more than the public’s attention. They also compete for the respect of their peers. With a variety of food trucks lined up waiting to impress with multicultural meals, The Block has created a natural atmosphere of competition among the trucks’ operators. Guete sees this dynamic not only as healthy, but also desirable.

“This is a family; that’s how it should be,” Guete said. “To get better every day in what we do…that’s what it’s all about.”

“Latin cuisine is interacting…another reason I don’t want to be enclosed,” Guete reiterated. “I want people to see what I look like when I’m making (their) food.”

Latin cuisine is nothing new for the residents of San Antonio; however, traditional Mexican cuisine is still the most prevalent. Guete believes that Central and South American influence is not as apparent, but that San Antonians are becoming increasingly receptive of a wider palette of Latin American cuisine.

The next step, Guete says, is to publicize his business more. He wishes more people appreciated The Block for its challenging, creative environment. But despite his desire to expand, he maintains that passion and artistic integrity can never be compromised.

“When you do this just for money, that’s not going to work for you,” Guete warned. “Yes, you have to make the money to continue to promote what you really want to achieve as a chef. But in the end, you enjoy everybody else’s food when they know they’re not making it because they want your money. They want quality. They want you to give the best of what you’re doing.”