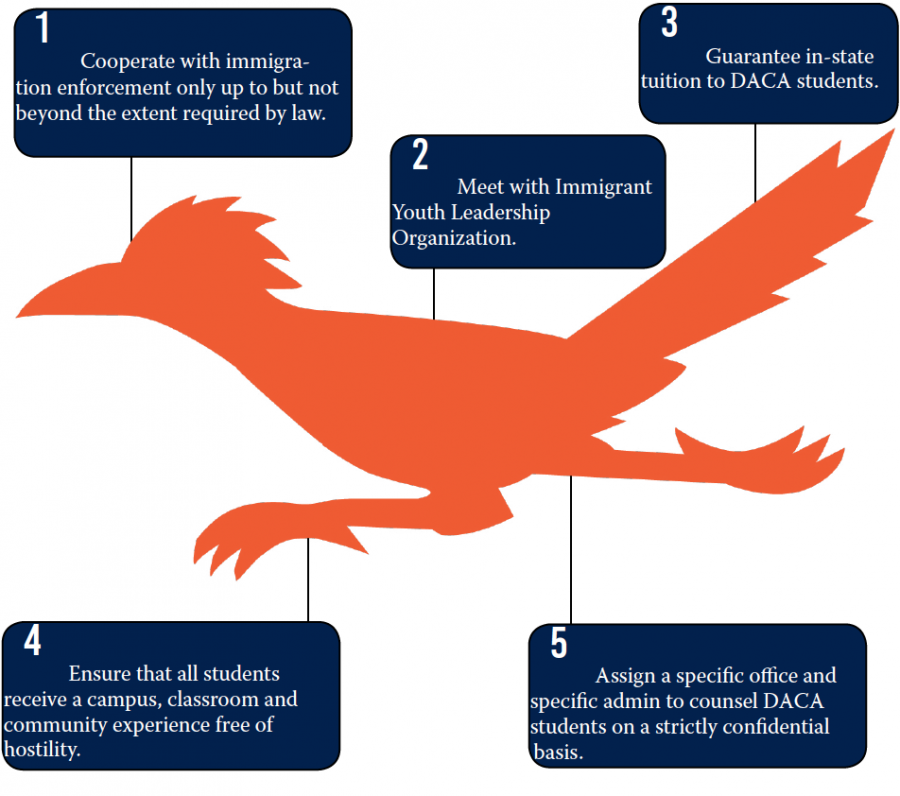 The UTSA Faculty Senate passed a resolution calling on the provost, president and UT System chancellor to affirm the university’s commitment to diversity.

“Many members of the Senate want to show strong and immediate support for students who might find themselves in danger, say if DACA (Deferred Action for Childhood Arrivals) was repealed or set aside in any way,” Writing Program Faculty Senator Greg Hazleton said.

The resolution requests that the UTSA administration investigate and implement concrete ways to provide safety and security for all students.

The Senate derived the idea from The Immigrant Youth Leadership organization’s (IYL) petition that called for UTSA to be designated as a ‘sanctuary campus.’ The Senate made a point of highlighting “core values” in the UTSA Mission Statement.

“The resolution was a way for the Senate to reiterate the fact that inclusiveness and respect are the values we see underlying the university mission,” Hazleton said.

Texas Governor Greg Abbot has voiced his opposition to sanctuary campuses on Twitter, while UT Chancellor William McRaven released a statement affirming his confidence and support of DACA.

“We do not discuss the immigration status of our students. In fact, the law allows and requires us to protect the students’ private information including immigration status,” UT System’s Communications Director Jenny Caputo confirmed in a statement to Texas Public Radio. The Faculty Senate resolution makes no reference to the term sanctuary campus despite a similar goal to protect students:

“The resolution the Senate passed is more or less the same in terms of content,” English Department Faculty Senator Alistair Welchman, one of the authors of the resolution, said. “It just doesn’t use the term because it seems to be a kind of trigger word for some state politicians. There’s no reason to use it if they’re going to find it offensive.”

“We are not a sanctuary campus. We don’t use that term,” Hazleton affirmed.

The primary distinction between the resolution and a sanctuary campus is the level of inclusiveness. The resolution calls for not only the protection of immigrants, but also requests the safety and security of all groups who feel insecure on campus.

“As the representative body of the faculty, we wanted the students to know that we stand in firm support of those values outlined in the resolution,” Hazleton affirmed.

“If the students don’t feel like those values are being upheld, we are an outlet that they can speak to.”

the full resolution and IYL petition: