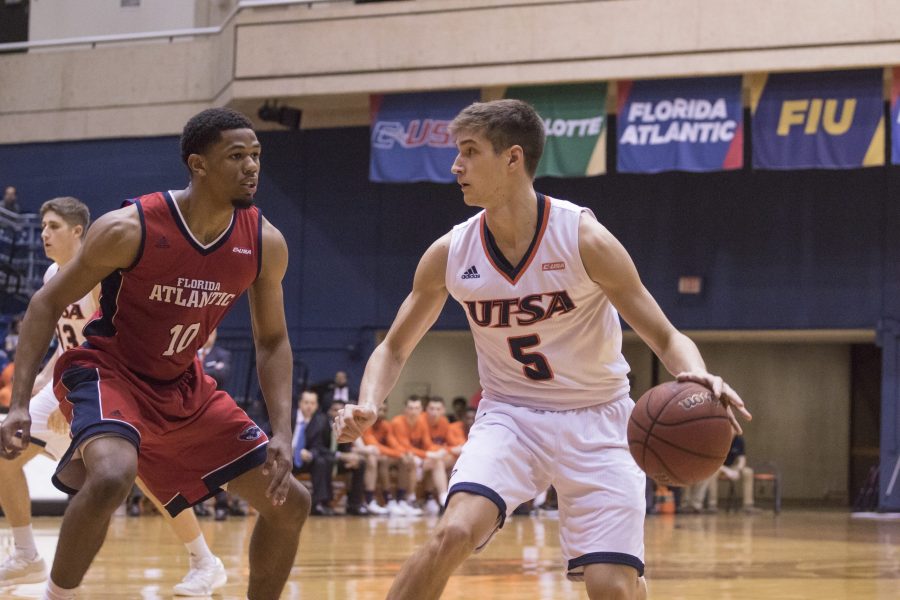 At the beginning of the 2016-17 season, the men’s basketball team looked as if they were struggling to adapt to first year head coach Steve Henson’s system. The team began at 2-7, and was losing games at a 15-point margin.

Many of those who saw last year’s 5-27 team were expecting a transitional year. Seven players from the late Brooks Thompson’s final year transferred or graduated and were replaced with Oklahoma transfer guard Bola Alade and six incoming freshman. Other than upperclassmen J.R. Harris, Nick Billingsley, Lucas O’Brien and James Ringholt, the rest of UTSA’s returning players were seldom used in the past season.

In spite of the team’s inexperience and inauspicious start, the Roadrunners have flourished thus far in conference play, starting at 4-1, and are now 9-9 overall. Two of their most recent victories were at the Convocation Center against the Florida Atlantic Owls (5-11, 1-4 C-USA) and Florida International Golden Panthers (4-14, 0-5) have defined the team’s sudden growth.

“There were a few times early in the year and exhibition games where they looked at each other and were unsure, but they trust each other more now,” Coach Henson said about his players Saturday afternoon. “They are a good, close knit group who care about each other.”

After trailing the majority of Thursday night’s game, the Roadrunners were led by a career high, 29 point, 10 rebound performance from junior forward Jeff Beverly as UTSA defeated Florida Atlantic 68-63.

At one point, the Owls were ahead by 11 points and UTSA was unable to consistently score apart from Beverly, shooting only 30 percent from the field.

Support from the guards was enough for Beverly to finish off the Owls, as he scored the final six points for the Roadrunners, including a go ahead basket over two Owl defenders.

As for their second win of the week, the Roadrunners were able to hold off strong scoring performances from FIU’s Elmo Stephen and Michael Kessens, outlasting the Golden Panthers, 57-55.

Beverly once again led UTSA players with 17, but freshman guard Bryon Fronhen’s 13 point, 10 rebound game was the story of the afternoon.

Saturday afternoon’s game against the Panthers was a contrast of drama, as the Roadrunners led for 30 minutes with a margin as high as 15 points, but was again struggling from the field. UTSA even went on an eight minute scoring drought beginning at the 14.38 mark in the second half.

In spite of the scoring struggles, the Roadrunners began to match FIU’s physical nature, and strongly benefitted from the free-throw line, shooting 83 percent from the line on 24 attempts.

After FIU’s Eric Nottage scored a layup putting the Roadrunners down 55-52, Frohnen scored the basket ending UTSA’s scoring drought. He then made two late free throws that giving his team the lead once again with 40 seconds left. Sophomore Center Nick Allen finished with the game’s final point.

With eight seconds left, FIU had a chance to push the game to overtime, but Nottage was unable to score as Littles grabbed the rebound, extending UTSA’s undefeated home record to 8.

Frohnen’s late game efforts have been the story to the Roadrunners season as unlikely heroes have stepped up to give UTSA four games ahead of last year’s win total.

“These last couple of games have frustrating, but as a team, we always persevere” Frohnen said on Saturday. “Our toughness has really helped us.”

The next home game for the men’s basketball team will be Feb. 2, as they play defending conference champion Middle Tennessee State (15-3, 5-0 C-USA) at 7 p.m. in the Convocation Center.