‘Creative Creatures vs. The Universe’ rocks the Brick at Blue Star 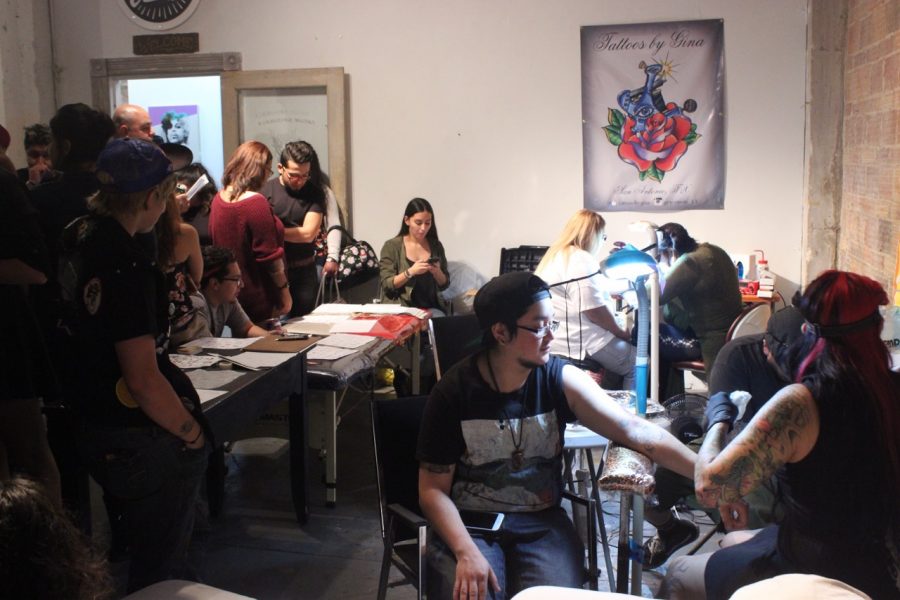 Sparked by a lack of activity in the San Antonio art scene, Creative Creatures sought to bring together amateur and professional artists, both local and regional, to be part of the growing art collective.

The dimly lit crowded corridor leading to Brick was filled with people of all backgrounds and fashion senses, including cosplay characters, culminating in a long line of visitors. Rios stood at the door greeting and selling tickets to patrons; portions of proceeds were donated to Robert Tatum’s Art Star Foundation.

Upon entering the brick faded to a matte white hallway filled with the aroma of beef fideo loco, a pulled pork sandwich topped with slaw & sriracha mayo courtesy of Renegade Foodie’s pop-up stand. To the left pinned against the wall, a never ending line leading to the bar and opposite, the entrance to the heart of “Creative Creatures.” Booths lined the walls and created corridors in the large white room.

Wayne Holtz (of House of Holtz) kicked off the performances of the evening with a dance-only performance followed by Cruzita Bones (of Bonez Burlezque). In between the booths, Mista Boombastica, an incense maker, left behind trails of his homemade “butt nekid.”

The corners of each line of booths were definite points to stop and stare as artists live-painted varying subjects; their work was available for sale at the end of the night. Particularly notable artist Adrian De La Cruz of DLC Art painted a large canvas of a stormtrooper at the event.

Patrons could also support face painters as well as more permanent skin artists from Calaveras Custom Tattoo. “Creative Creatures” fell on Friday the 13th, which made the event teem with tattoo machines buzzing and an endlessly long line of tattoo-happy patrons.

After the two dance performances, instruments and amplifiers hummed and shrieked in anticipation of a sonic act by Young Costello, a ska reggae four-piece band.

There was an overwhelming amount of support for each artist at this event. Regina Morales held a crowd near her booth showcasing her popular illustrations. Juxtapoz magazine featured artist, Jonny Duncan, sold prints, canvas pieces and apparel with his distinct cartoon figures. St. Dukes, local jazz rock four-piece amassed a large crowd in the second musical act.

The final act of the night, Orsinger, had a large group of musicians performing Latin fusion rock and ska for a large crowd of dancers and onlookers.

The event never lulled in crowds and creativity throughout the entire night. “Creative Creatures vs. The World” was the apex example of San Antonio’s growing art scene. Be on the lookout for their next event!