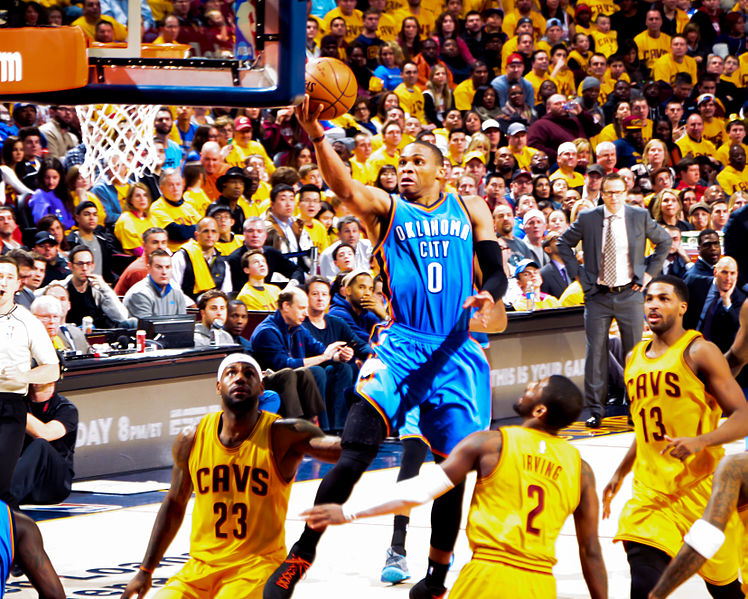 Since the 1985-86 NBA season there have been 24 40-point triple-doubles. A quarter of those have come this season with three apiece by James Harden and Russell Westbrook, who not so surprisingly are leading the race for the NBA’s Most Valuable Player in 2017. Houston Rockets standout point guard James Harden is the only player whose performance is comparable to Westbrook this season. From a statistical standpoint, Westbrook is averaging more points and rebounds, but Harden’s 11.5 assists per game are not only helping keep him atop the leaderboards for MVP, they are also keeping his team in the win column.

The Rockets are sitting comfortably in the number three seed, behind only the Spurs and new-look Warriors atop the highly competitive Western Conference. With the additions of three point marksmen Ryan Anderson and Eric Gordon this season and Harden’s move from shooting guard to point guard in Mike D’Antoni’s fast paced system, Harden is flourishing. Harden has made the move look effortless and is having his best statistical year to date. He has even started to play a little defense, a part of his game that is frequently scrutinized.

”The Beard” also had a 53 point, 17 assists and 16 rebound game this year, tying Wilt Chamberlain for the highest scoring triple double in NBA history. Not to mention, Harden is only a pair of rebounds away from averaging a triple double, a feat currently in progress by the All-Star Starter snub, Oklahoma Thunder point guard Russell Westbrook.

Since the departure of Kevin Durant, Westbrook has solidified himself as one of the best players in the NBA. He’s currently averaging 30.7 points, 10.5 rebounds and 10.3 assists per game. Leading his team in every statistical category excluding blocks. If Westbrook manages to continue his streak of dominance he could accomplish something seemingly impossible. Since Oscar Robertson did it during the 1961-62 NBA season, no one has ever averaged a triple double for the entirety of a season. To put this in perspective, Westbrook is doing something that only one person has ever done before and on less possessions per game than “The Big O.” In 1961-62, Oscar Robertson’s team averaged over 120 offensive possessions per 48 minutes. A pace much faster than the Thunder this season, averaging under 100. Meaning that Russ is doing what Oscar did but on less touches.

Amongst the league’s top rebounders this season Westbrook is number 11 with 10.5 per game. At a pedestrian six feet three inches, Westbrook is far and away the shortest player amongst them. Names above him on the list include the likes of big men such as Deandre Jordan, Dwight Howard, Anthony Davis and Kevin Love. Players that tower over the six foot three, 200 pound guard from California. This is a testament to his ferocious tenacity on the court. “I don’t really care, honestly,” Westbrook told a New York Times reporter. “I like to win and compete at a high level. I do the same thing every year.” We care Russell , we care.

At number three on the KIA MVP Ladder is a man named Kevin Durant. His game has translated beautifully into the Warriors unselfish, high scoring offense and his defensive prowess has made a noticeable impact (2.4 blocks in his last 5 games). Durant has been an excellent rim protector for a relatively undersized team and is having the best shooting season of his career. Shooting 40 percent from beyond the arc, 60.7 percent  from inside and 86.3 percent from the line. The only stat KD has seen fall since moving to the Warriors is his free throw percentage, averaging 88.2 percent until this year. Maybe the adamant boos from opposing fans have decreased his focus at the line this season?

Whether that stands not, his or not his willingness to pass up good shots for great ones has made the 2014 MVP a perfect fit, helping lead his team to a league leading 38-6 record. Sure, it certainly doesn’t hurt that the team he joined went 73-9 last year, boasting the best record in league history, but KD’s jaw dropping display of versatility and skill in his new home this season is unquestionable.

Numbers four and five on the list are very different players except for their uncanny size, athleticism and passing vision. One has been to the Finals the last six years in a row, winning three titles and is a four time MVP award winner. The other is a six foot 11 inch point guard from Greece nicknamed “The Greek Freak” for his immense length and agility. The former, the Cleveland Cavaliers superstar leader LeBron James, the latter is Giannis Antetokounmpo a franchise star in the making.

James is continuing to seemingly do everything for his squad. The Cav’s tout the best record in the Eastern Conference thanks in large part to James’s play. How big of an impact has he made? Since returning to the Cavs, his team is 3-12 when he rides the bench, despite having all stars Kyrie Irving and Kevin Love play. The fifth leading vote getter is  Giannis Antetokounmpo. A case could easily be made that Celtics Point Guard Isaiah Thomas, the face of the Spurs franchise Kawhi Leonard or high scoring guard Demar Derozan, could be in the top five. But with the seasons that both Harden and Westbrook are having it is unlikely someone will dethrone them from the top of the MVP polls. However, there is still half a season of NBA action left to be played and with so much talent on display across the league, anything is possible. After all it is the NBA, and it’s where amazing happens.